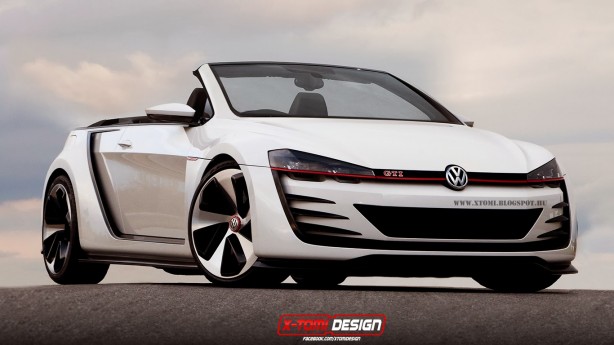 The Volkswagen Design Vision GTI concept that made its debut at the Wörthersee Show in Austria last year was one of the best concepts the German automaker has ever created.

Its aggressive body kit exaggerates the standard GTI’s styling elements to great effect. Building the same MQB platform as the GTI, the car is however, wider, lower and shorter to give it that supercar proportion.

We’ve always thought it would look just as good as a cabriolet. Well, that’s now a reality, albeit only in the digital world, thanks to X-Tomi Design. They have literally taken the roof off to create an almost Audi R8 Spyder-like Design Vision GTI Cabriolet concept!

Despite rendering only the front three-quarter view, like its hatch counterpart, it looks absolutely fabulous!

What do you think? Should Volkswagen build a Design Vision GTI Cabriolet concept for this year’s Wörthersee? Tell us in the comments below.