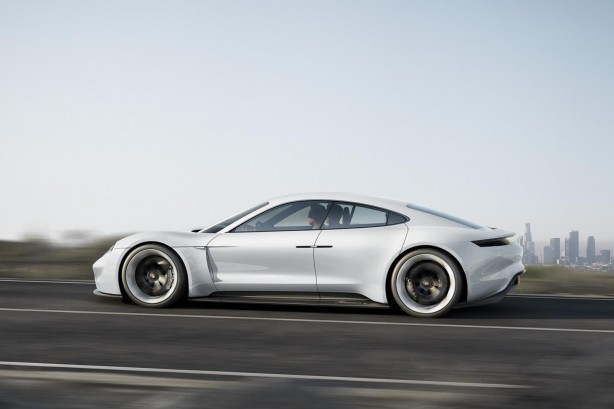 Porsche has taken the wraps off its dramatic “Mission E” concept car at the Frankfurt Motor Show.

Created as Porsche’s answer to the Tesla Model S, the Mission E concept is powered by two electric motors – one for each axle – providing a combined output in excess of 440kW (600PS) to all four wheels. It also has all-wheel steering to aid handling.

Porsche says the concept is capable of hitting 100km/h from a standstill in 3.5 seconds, while 0-200km/h takes less than 12 seconds and a Nürburgring lap time of under 8 minutes. 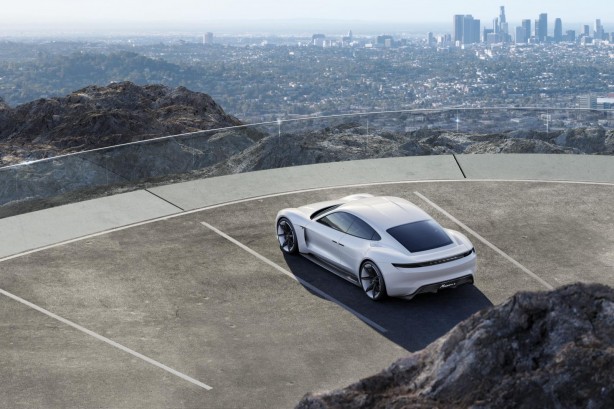 With a claimed driving range of over 500km, the Mission E draws its power from an innovative 800-volt battery, with a Porsche Turbo Charging system that will recharge the battery pack up to an 80% level in approximately 15 minutes for a 400km range. The battery can also be charged inductively without the need for any cables.

The lithium-ion battery is mounted in the car’s underbody and runs the whole length between the front and rear axles. This provides the Mission E concept with optimal weight distribution and a low centre of gravity.

The concept’s body is made up of a functional mix of aluminium, steel and carbon fibre reinforced polymer. The wheels – 21-inch at the front and 22-inch at the back – are also made of carbon fibre. 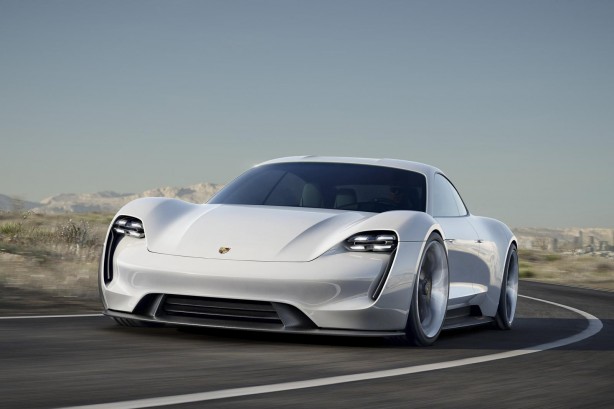 According to Porsche, every square inch, every angle, every radius of the Mission E reflects one thing above all else: emotional sportiness in the best tradition of Porsche design. Distinctive air inlets and outlets – on the front, sides and at the rear – typify the body’s full flow-through design that enhances efficiency and performance. The integrated air guides improve air flow around the wheels, and the air outlets on the sides reduce overpressure in the wheel wells, thereby reducing lift.

Looking like a futuristic Porsche Panamera, the Mission E sports a set of matrix LED headlights in the brand’s typical four-point light design. The car’s distinctive front wings, low-cut bonnet and side window lines are a nod to the 911. Unlike conventional sedans, the Mission E has two counter-opening doors without a B-pillar for convenient entry. At the back, a three-dimensional “PORSCHE” badge is illuminated from inside and hovers beneath an arch of light that extends across the entire width in a black glass element. 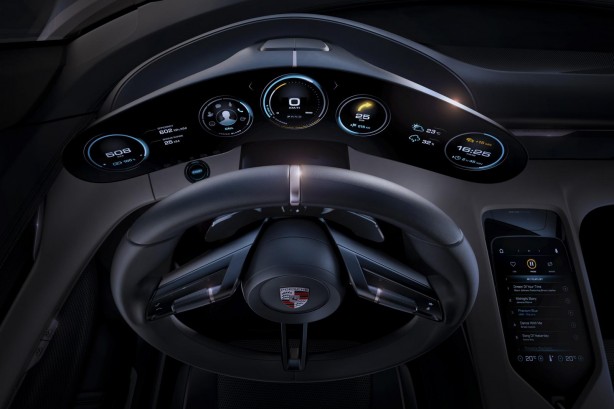 Inside, it adopts four individual slim and lightweight seats. The instrument cluster shows five round instruments and is displayed virtually in OLED technology. An eye-tracking system detects, via camera, which instrument the driver is viewing. The driver can then activate the menu of the instru­ment in focus by pushing a button on the steering wheel and navigate in it – which also involves an interplay of eye-tracking and manual activation. But that is not all: the display follows the seat position and body attitude of the driver in what is known as a parallax effect. If the driver sits lower, higher or leans to one side, the 3D display of the round instruments reacts and moves with the driver. This eliminates situations in which the steering wheel blocks the driver’s view of certain key information

Porsche has also fitted a holographic display that extends into the passenger’s side and shows individually selectable and controllable apps like media, climate control, navigation, contacts, etc.

While it is a concept at this stage, the technology showcased by the Mission E concept will likely find their way to production models in the near future.