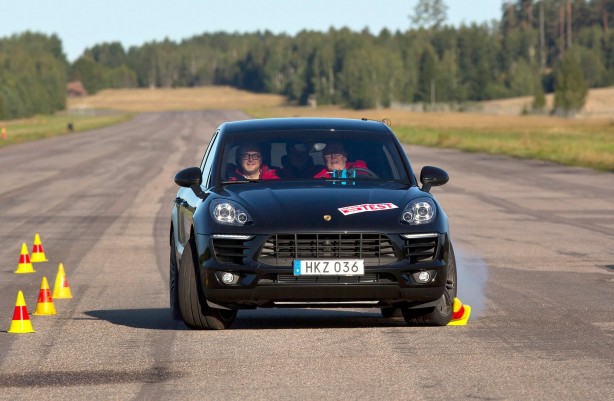 Well, the guys are back. This time, their target is the new Porsche Macan. The test is simple – it simulates a driver driving along a straight road at 70km/h when a “Moose” suddenly appearing out of nowhere, forcing the driver to take a high-speed evasive manoeuvre by swerving to the left and then quickly turns right again to get back into the correct lane.

Cars with effective stability control system will perform well as the computer comes in for the rescue.

The Macan, however, appears not to be one of them.

According to Teknikens Värld test driver, Linus Pröjtz, the Macan performed “strangely” during the Moose Test, as the left front wheel locked up during the manoeuvre.

That means that rather than turning right to get back into the correct lane after the evasive manoeuvre, the Macan continued straight ahead in the opposite or wrong lane, risking a head-on collision with another vehicle in real life conditions.

Fearing that the test car might be faulty, the publication performed the test again on a different car of the same model and the result was “equally bad”.

You can watch the test in the video below for yourself.

Since the release of the video, Porsche has issued a response saying the left front brake locked as a result of the Active Rollover Protection (ARP) system kicking in, where it momentarily apply brake force (for a maximum of 300 milliseconds) to the front wheel at the outside of the bend to prevent the car from rolling over.

According to Porsche, the intensity of ARP intervention is dependent on vehicle speed and steering angle speed, among others. This means that ARP brake intervention is diminished accordingly at reduced vehicle speed or steering angle speeds. On the other hand, it means that the driving style adopted by Teknikens Värld was very demanding and resulted in the safety function being triggered.

Active Rollover Prevention is permanently active, irrespective of whether Porsche Stability Management (PSM) is on or off. If PSM is on, ARP intervention is significantly diminished since PSM brake interventions to stabilise the vehicle occur much earlier or are superimposed.

Porsche went on to say this short intervention ensures the directional stability of the vehicle: “Lateral displacement is negligible. For this reason we do not regard this driving state as critical. As the video shows, lane changing can be completed stably and safely. What is more critical in this situation is if the vehicle were to roll over or the rear were to break away. The vehicle demonstrated none of these instable states (rollover, oversteer, wheel lift) at any time.”