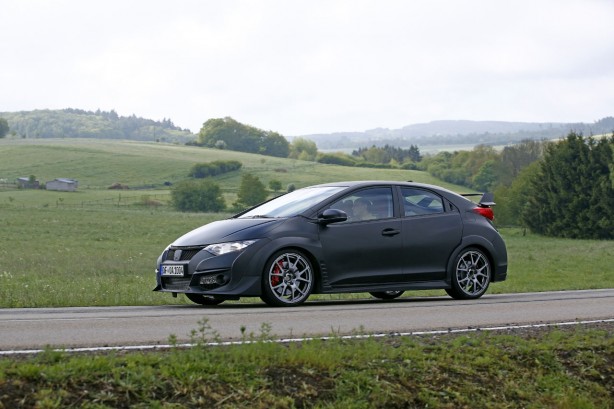 Our spy photographers have caught what seems to be a near-production model of the upcoming 2015 Honda Civic Type R undergoing road test on the German B-roads.

Totally undisguised, the highly anticipated model has been spotted with a matte black paint job, Brembo brakes and quad exhaust tips. As expected with most concept to production model, the exterior of the latest prototype has been toned down, compared to the sizzling hot Type R concept that Honda teased us in early March this year. 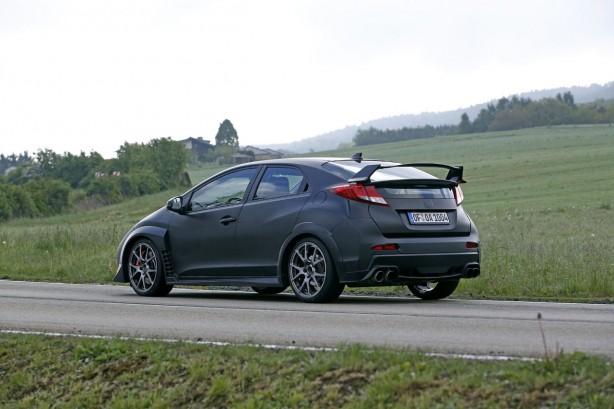 Gone are the carbon fibre aero bits underlining the car and that ultra aggressive carbon fibre rear spoiler. But at least, the turbocharged 2.0-litre inline four-cylinder engine packing over 208 kW is here to stay.

Honda has been determined to crush the current record for the fastest lap around the Nürburgring for a series production front-wheel drive with the new Civic Type R. The record is currently held by the Renaultsport Mégane 265 Trophy with a lap time of 8:07.97.

The Honda Civic Type R is expected to make its debut at the Geneva Motor Show in March 2015.