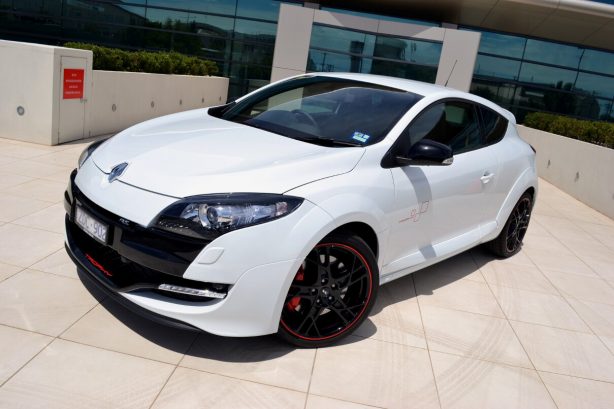 Renault has always pushed the boundaries when it comes to hot hatches. In 2009 the striped-out Megane R26R set the fastest lap time for a front-wheel-drive car around the famous Nurburgring. Now they have done it again with the new Megane RS265 with a lap record of 8 minutes and 8 seconds – 9 seconds quicker than the old Megane R26R and only just 4 seconds behind a Porsche Cayman. And that was with a full production version RS265, not a striped-out racer.

The Renault Sport Megane RS265 is now officially the fastest FWD production car around the Nurburgring. To commemorate this achievement, Renault even released a special edition RS265 called the 8:08 limited edition – referring to the lap time – which has the same suspension settings as the car used to accomplish the lap record.

The RS265 is powered by a turbocharged 2.0-litre four-cylinder engine, the same unit found in the original RS250, but gains extra 15 horsepower (11 kW) thanks to a new intake system and a slight raise in turbo boost.

First up, the figures look good. It packs 195 kW or 265 horsepower – hence the nameplate, 360 Nm of torque and does 0-100kph in a blistering 6.0 seconds flat. This kind of performance puts the RS265 comfortably in the upper end of the “hot hatch” category which means it has the Volkswagen Scirocco R, Ford Focus ST, Mazda 3 MPS and the Opel Astra OPC in its sight.

The Megane RS250 was praised for its sharp handling and strong engine. So, has this updated RS265 with more power managed to heat things up even further? Read on to find out.

The RS265’s basic shape is the same as the RS250, differentiated by subtle details such as the black wheels with red lip and Trophy decals on the sides and front intake. It’s got a deep front bumper punctured by hefty inlets. There are the usual blisters of arches and sideskirts so fond of today’s hot hatches and the rear gets a black diffuser with the tailpipe in the middle.

No doubt, it looks mean and aggressive. And in pearl white paint job like what’s on our test car, it does look pretty hot with all the white on black contrast. 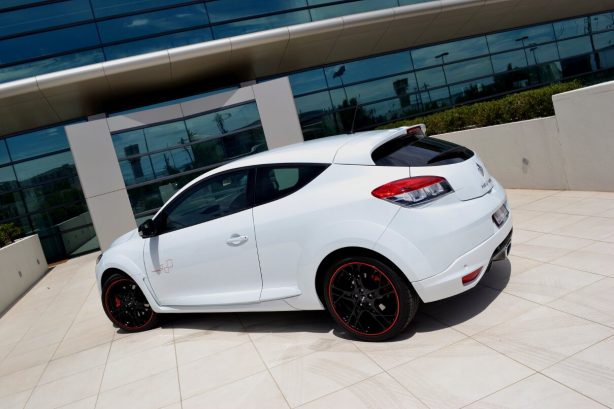 Inside on the other hand, things are a bit boring. The dashboard is carried over from the standard Megane, which is nothing but ordinary, and the dials are angled in an odd way. However, the leather wrapped Recaro sports bucket seats do look very cool and the yellow safety belts reminds you of the car’s potential every time you put them on.

At the back, there is just enough room for two averaged sized adults and a small child, as head room and leg room are limited. Usable storage space is scarce. But these are the least of your worries when you buy a car like this as the only thing that matters is how it drives.

The Megane RS265 is currently the most powerful front-drive hot hatch in Australia, a title that will be very soon taken away by the 206kW/400Nm Opel Astra OPC when it arrives later this month. However, the Renault’s driving dynamics will be hard to beat.

Be it a sweeping corner, hairpin or chicane, the RS265’s ability to tackle them all with great composure is phenomenal. Grip from the 235mm wide Bridgestones is exceptional – especially in long, loaded-up corners. And the most amazing thing about the Renault is that it feels fairly neutral charging through the bends. There is very little understeer and even when you do get some, it does so very gently so you have time to react before it bites.

The suspension is very well sorted for this kind of sporty driving – endlessly keeping the wheels glued to the road while preventing the car from getting unsettled by mid corner bumps. Body roll is also well suppressed.

The steering is razor sharp in its response and feeds every information about the road surfaces to your palms which, on top of what you are already getting from the bucket seats, makes you feel even more connected to the car and the road. 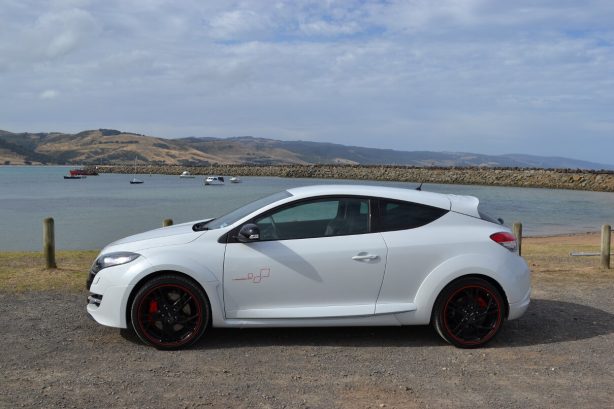 The highly responsive engine pulls hard from around 2,500rpm all the way to its 6,500rpm red line. It has a wide torque band and turbo lag is minimal as you work the power through the six-speed manual transmission, which is quick and confident. But you will find that it lacks the precision of the box found in the Scirocco R or even the Astra GTC Sport we drove two weeks back.

With 195kW spinning the front wheels, torque steer is inevitable. But unless you are stamping on the right pedal, it doesn’t really hamper the overall driving experience.

Stopping power is provided by excellent Brembo items at the front and slotted rotors all round, which shed speed as fast as it gains them. 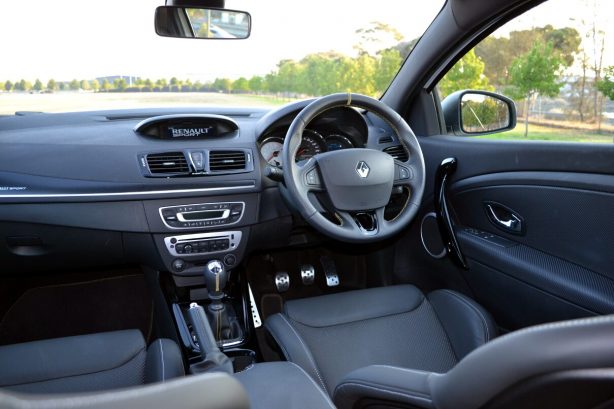 The RS265 has a cool feature that allows you to adjust the throttle response to suit different driving conditions. For our test in some lovely mountain roads in country Victoria, we had it in Extreme mode – the sharpest response. A press of the Electronic Stability Control (ESC) button enables sport mode which then locks in the selected throttle response setting and loosen up the ESC watchdog.

Once you are done hammering the RS265 around the hills and back in to town on your way home, the Renault will, however, start to feel unease. The ride is bone-breakingly harsh, made worse by the thinly cushioned bucket seat, while rear quarter visibility is limited by the thick c-pillars. It does, however, keep road and wind noise well controlled in the cabin at highway speed.

The RS265’s basic interior is far from high-end standard and loses out to its better built German rivals. But it does come with some nice touches such as the carbon fibre effect dashboard inserts, the piano black lower centre console and door handles, and the full leather upholstery.

Most contact areas are made of soft touch plastics or leather and general fit and finish is good. 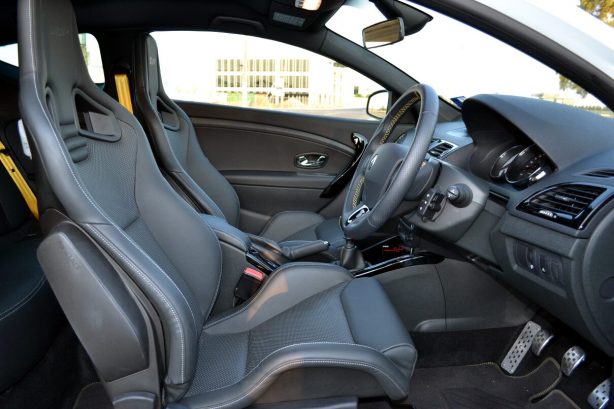 It doesn’t happen very often for a high performance car, but the Renault’s thirst for fuel is surprisingly quite low, even when you are heavy on the throttle.

It managed to return a respectable average fuel consumption figure of 8.8l/100km over our week long test, with an equal split of urban and highway driving, with a spirited mountain run thrown in. That’s really not bad for a boosted 2.0-litre four-pot, and not far off from the advertised 8.2l/100km figure.

But it made up for this with the super cool Renault Sport (R.S.) Monitor which displays everything from turbo boost and power outputs to G-meter and pedal positions. It even has a built-in 0-100kph and quarter mile stopwatch!

On the safety front, the RS265 is equipped with 6 airbags, electronic stability control with antilock braking system and traction control. Front and rear parking sensors are also standard.

Good looks, loads of power and fast – the Renault Sport Megane RS265 is as good as you get for a hot hatch. There are very few front-wheel-drive performance cars that can match the Renault’s outstanding dynamics and exhilarating driving experience.

The whole package is so focused, performance-biased and sharp that you better love driving if you decide to buy one. And if that’s all you care about, the RS265 will put a big smile on your face, every time you get behind the wheel.