Mercedes-AMG GT R makes its round at the Nürburgring [video] 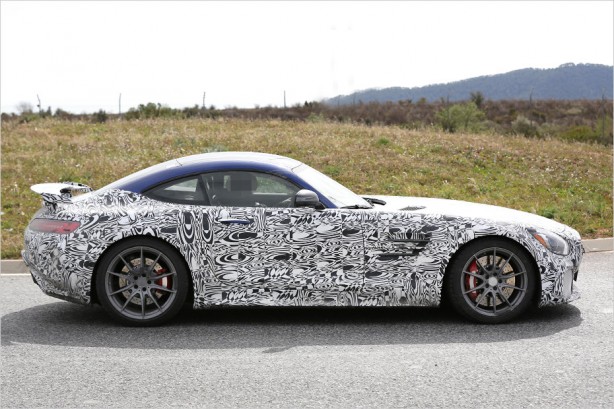 Here’s proof that the Mercedes-AMG GT R is inching closer to production. Spotted making rounds at the infamous Nurburgring circuit in Germany, the hardcore version of the AMG GT sports coupe is certain for one thing – a sonorous exhaust note.

First spotted in January undergoing winter testing in Germany, the AMG GT R has its crosshair set on the Porsche 911 Turbo S and Jaguar F-Type SVR. And it does so with an even higher output version of the 4.0-litre twin-turbo V8 engine, which currently makes 375kW and 650Nm in the AMG GT S. Bigger brakes and stickier tyres will also be the order of the day.

Rumours also have it that the AMG GT R will feature a four-wheel-steering system and adjustable spool-valve dampers to tighten handling even further. This is further aided by some sort of active aerodynamic elements.

While nothing is official, we can expect the Mercedes-AMG GT R to debut late this year or early 2017.

Previous Fancy upgrading your Nissan Navara with a GT-R engine? You can.
Next MR Racing takes Audi RS3 Sportback to over 390kW