Fancy upgrading your Nissan Navara with a GT-R engine? You can. 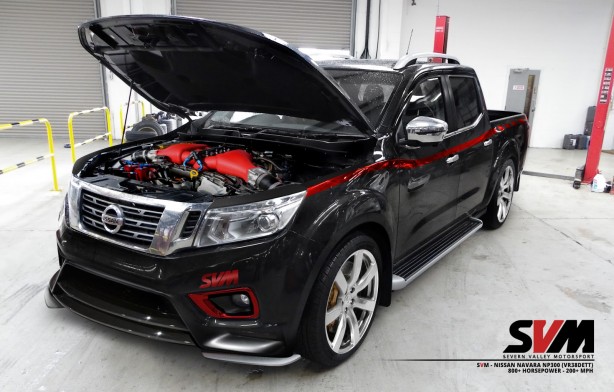 The aggressive pickup featured above wasn’t always that way, it rolled off the line a bone stock Nissan Navara NP300 with a 2.3-litre twin turbo diesel and a 6-speed manual gearbox. It once produced 140kW and 450Nm of torque, ideal for towing and any other trade work.

Alas this tradie truck is no more, the madmen over at Severn Valley Motorsport (SVM) have performed open heart surgery, swapping out the mundane 4 banger for the Nissan GT-R’s 3.8-litre twin-turbo V6. Along with the engine, the team also kept the GT-R’s six-speed double clutch transmission.

So, what does it put down? 404kW like the 2015 GT-R? Wrong! SVM would never go this far without intent to go further. The Navara outputs a blistering 597kW with a claimed top speed of 322km/h.

Obviously, none of this was by chance, SVM are well versed with Nissans. Their previous pet project transformed the family-oriented Qashqai into a 745kW monster. With a 0-96km/h time of just 2.6 seconds, it outpaces Tesla’s ludicrously quick Model S P90D.

“We can produce these types of vehicles if we get the go-ahead for one from a customer. The go-ahead, of course, including an appropriately sized payment”.

In an interview with Top Gear, SVM’s Luke Anthony was quoted saying: “Anything is possible, we are open to the craziest of ideas.”

Here’s hoping they will GT-R the 370z at some point.