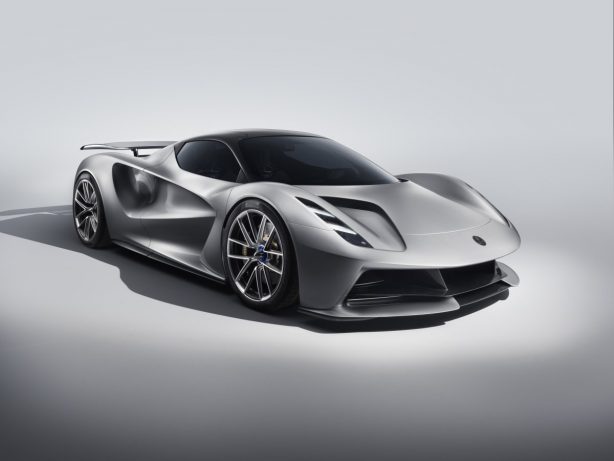 The Lotus Evija hypercar has made its world debut at an exclusive event in London. Billed as the world’s first all-electric British hypercar, striking two-seater EV tasked with re-establishing Lotus as a leader of engineering and design.

Said to be the most powerful and dynamically accomplished road car Lotus has ever built, the Evija (pronounced ‘E-vi-ya’) is a bold statement of intent from the majority Chinese owned British brand and is a hypercar built ‘For The Driver’.

With a target output of 1,492kW from its electrified powertrain and 0-100km/h in less than 3.0 seconds, the Evija will also be the world’s most powerful series production road car when it hits the road in a few years. It is expected to have a top speed of over 320km/h. 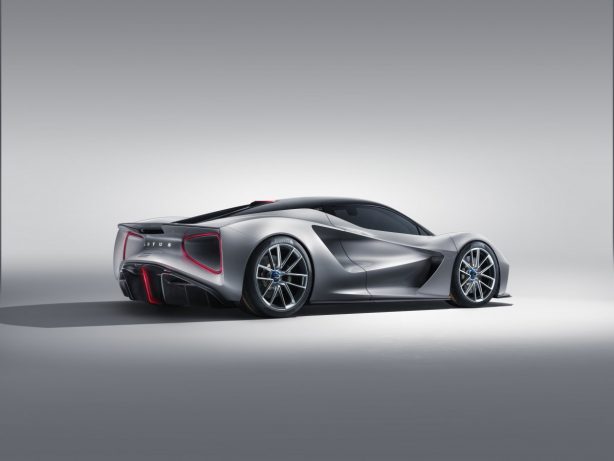 At the heart of the Evija is an ultra-advanced all-electric powertrain. It has been developed by technical partner Williams Advanced Engineering, famed for success in motorsport, from Formula One to electrifying the first four seasons of Formula E.

The battery pack is mid-mounted immediately behind the two seats and supplies energy directly to four powerful e-motors. This highly efficient system is said to be the lightest, most energy dense, electric power package ever fitted to a road car. With a target weight of just 1,680 kg, thanks to its ultra-lightweight carbon fibre monocoque, it will be the lightest pure electric hypercar ever to go into series production.

The car will be designed, engineered and produced in the UK, with only 130 slatted to be built.

The Lotus Evija in Detail

At first known only by its Lotus Type number – Type 130 – the car has been christened the Lotus Evija. As a name, it is derived from variations of Eve, and means ‘the first in existence’ or ‘the living one’.

As the first all-electric British hypercar, the Evija continues that story of innovation. It also signals the start of an exciting new chapter for Lotus under the stewardship of Geely, the fastest growing automotive group in the world.

Lotus Cars CEO Phil Popham said: “Evija is the perfect name for our new car because it is the first all-new car to come from Lotus as part of the wider Geely family. With Geely’s support we are set to create an incredible range of new cars which are true to the Lotus name and DNA.” 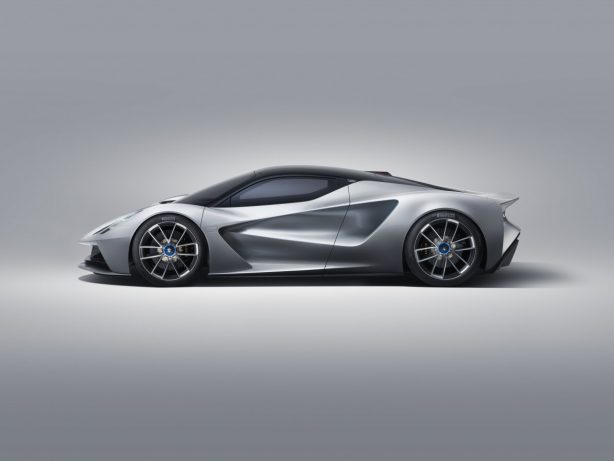 The most striking element of the Lotus Evija is its exterior. From every angle the full carbon fibre bodywork is stretched taut, appearing shrink-wrapped over the mechanical components. Crouching low to the ground, with a ride height of just 105 mm, the pronounced muscular haunches envelop the teardrop cabin that sinks between them.

Taking inspiration from the aeronautics industry, the exterior is a perfectly proportioned blend of fluid forms and crisp lines, typified by the gently curved but sharp leading edge of the bonnet, which is reminiscent of many classic Lotus road and race cars.

Cues for the Evija’s surface language was also taken from nature. Russell Carr, Design Director, Lotus Cars, commented: “During the initial design stage we spent many hours studying images of geological forms – rocks that had been carved by nature over the centuries. We believe we’ve captured these beautiful, intriguing and elemental lines within the Evija.”

Lotus says the exterior design is exceptionally efficient on every level, the most obvious being the Venturi tunnel which pierces each rear quarter. Inspired by Le Mans race cars, they optimise air flow by directing it through the bodyshell.

Aside from creating a breath-taking presence, this design concept – known as ‘porosity’ – aids the delivery of high-energy air flow to the rear of the car. This in turn counteracts the low pressure behind the car to reduce drag. Furthermore, the Venturi effect inside the tunnels pulls air through the rear wheel arch louvres, maintaining air quality in the diffuser. 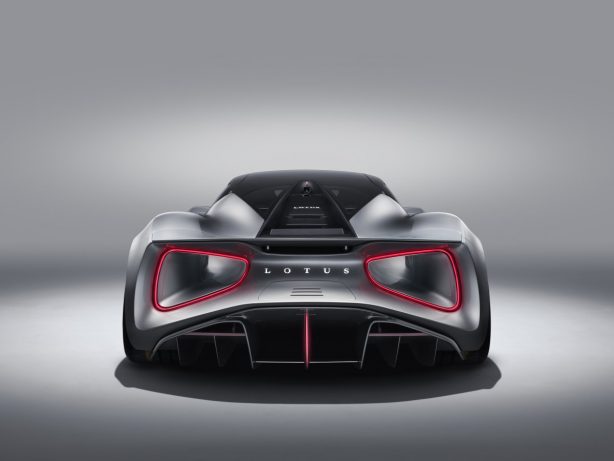 When viewed from the rear of the car, each tunnel is edged with a red LED to create a striking ribbon-style light signature. The result is a stunning visual effect that is said to be akin to the afterburners on a fighter jet, especially when seen at night. As an extra detail, an LED hidden within each tunnel illuminates its interior.

The directional indicators are incorporated into the corners of the ribbon, while the reversing light is provided by the illuminated ‘T’ of the ‘LOTUS’ wordmark above the integrated charging flap.

Another key feature of the Evija’s sophisticated aerodynamic system is the bi-plane front splitter. Designed in three sections, the larger central area provides air to cool the battery pack – mid-mounted behind the two seats – while the air channelled through the two smaller outer sections cools the front e-axle. Lotus aficionados may notice a respectful nod to the iconic Type 72 Formula 1 car, with its square front central section and two side wings.

Magnesium wheels provide optimum lightness and strength, and are sized 20 and 21 inches at the front and rear respectively. They are shod with Pirelli Trofeo R tyres, developed specifically to achieve ultimate performance. To deal with the Evija’s extreme performance, the car is equipped with a forged aluminium AP Racing braking system with carbon ceramic discs front and rear.

The Evija is the first Lotus road car to ever feature a full carbon fibre chassis. Moulded as a single piece for exceptional strength, rigidity and safety, the full length of the underside is sculpted to optimise downforce. It includes an integrated air diffuser which extends from under the B-pillars to the rear. 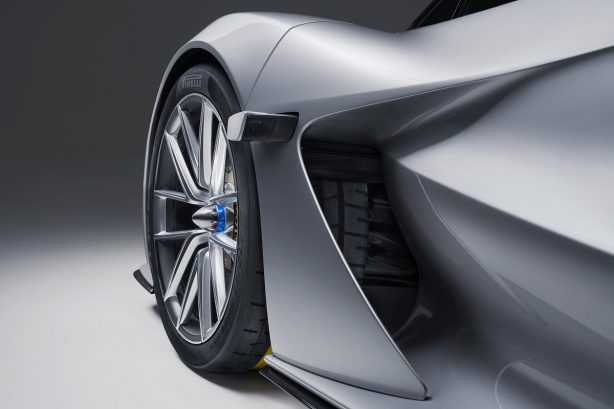 Active aerodynamics are deployed in the form of a rear spoiler, which elevates from its resting position flush to the upper bodywork, and an F1-style Drag Reduction System (DRS). Both are deployed automatically in Track mode, though can be deployed manually in other modes.

The absence of traditional door mirrors plays a part in reducing drag. Cameras integrated into the front wings are electronically deployed on unlock, while another camera built into the roof provides a central view. Images are displayed on three interior screens.

With target figures of 2,000 PS (1,492kW) of power and 1,700 Nm of torque, the Lotus Evija is the world’s most powerful production road car. Key to that exceptional power output is the 2,000 kW lithium-ion battery, supplied with its management system by Williams Advanced Engineering (WAE) as part of a joint venture with Lotus to collaborate on advanced propulsion technologies.

The battery pack is mounted centrally behind the passenger compartment, and its cover is visible through the glass rear screen. Lotus says this positioning delivers significant advantages in terms of styling, aerodynamics, packaging, weight distribution, occupant comfort and dynamic handling. It also supports fast and convenient servicing and maintenance. Furthermore, the set-up has been designed so that in the future alternative battery packs – for example, to optimise track performance – can be easily installed.

Power is fed from the battery pack to a bespoke in-line axial arrangement of two high-power density e-motors. These feature integrated silicon carbide inverters and epicyclic transmission on each axle of the four-wheel drive powertrain. 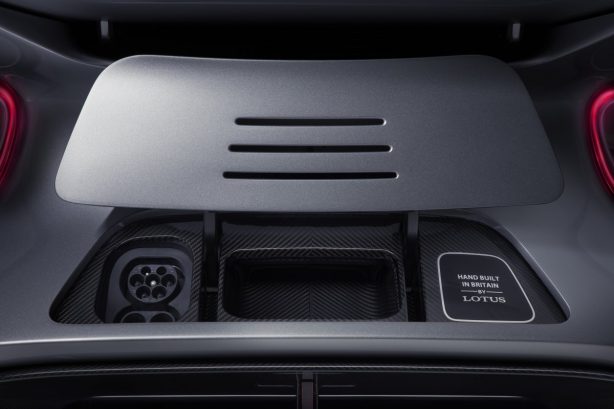 The battery has the ability to accept an 800kW charge. Although charging units capable of delivering this are not yet commercially available, when they are, it will be possible to fully replenish the battery in just nine minutes.

The CCS2 charging socket is hidden behind a vented flap at the rear of the car. In the same location is a small plaque, reminding customers of the Britishness of the Evija.

Inspired by the technical precision of race car engineering, the dominant characteristic of the cabin is the ‘floating wing’ dashboard which can be glimpsed from outside through the windscreen.

Access to the cabin is through the two dihedral doors (a first for Lotus). Handle-free to preserve the sculpted exterior, they’re operated via the key fob.

Visible carbon fibre surfaces enhance the sense of light weight, while a thin metal band – engraved with the words ‘For The Drivers’ – runs centrally through the squab of both seats.

The Evija is the first Lotus to provide drivers with a full suite of digital connected infotainment, which will benefit from over-the-air software updates. A powerful on-board modem enables communication to the cloud, and the driver can interact with that data through a Lotus smartphone app. The app will enable drivers to monitor their Evija from anywhere in the world, for example, to check the battery charge status and driving range. It will also support remote use of air-con, to heat or cool the cabin ahead of the next drive.

The Evija’s infotainment system includes a chronograph to allow the driver to record their lap times. Connection to the cloud means they can view their performance while at the track and recall previous sessions through the app.