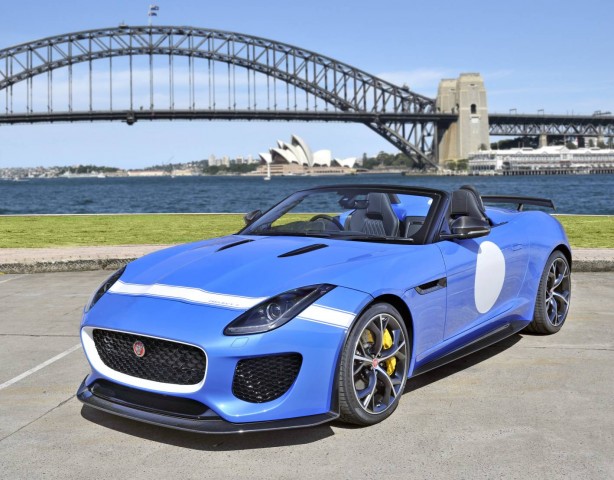 Jaguar Australia has confirmed ten examples of the limited edition F-Type Project 7 are heading Down Under and will change hands at a retail price of $339,610.

The F-Type Project 7 is the first Jaguar performance vehicle from Jaguar Land Rover’s Special Operations team and will be produced in an exclusive, limited-edition run of just 250 units worldwide.

Built exclusively as a roadster, the F-Type Project 7 pays tribute to one of the most famous and iconic racing Jaguars: the three-time Le Mans winning D-type, which in 2014 is celebrating its 60th anniversary year. The Project 7’s name pays homage to Jaguar’s seven outright Le Mans wins.

First unveiled at the 2014 Goodwood Festival of Speed in the United Kingdom, the Jaguar F-Type Project 7 is not only the most focused derivative of the highly acclaimed F-Type range, but is also the fastest and most powerful production Jaguar ever built. It is fully road-legal, with a removable roof and 196 litres of stowage space. 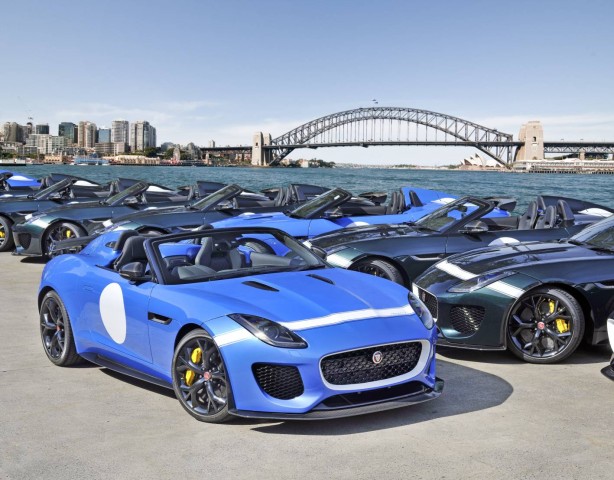 The beating heart of the F-Type Project 7 is a 5.0-litre supercharged V8 engine developing 423kW and 680Nm, 19kW more than the F-Type R. With 1,585kg to move, the all-aluminium-bodied F-Type Project 7 sprints from zero to 100km/h in just 3.9 seconds, en route to an electronically-limited top speed of 300km/h.

Power is sent to the rear wheels through Jaguar’s eight-speed Quickshift transmission and second generation Electronic Active Differential (EAD). Carbon Ceramic Matrix (CCM) brakes, available as an option on the F-Type R Coupé, are fitted as standard on F-Type Project 7. Also standard is Torque Vectoring by Braking (TVbB) which, working in conjunction with the EAD, enables even more precise handling. Bespoke carbon-fibre aerodynamic aids and a unique suspension set-up wrap up the F-Type Project 7 performance upgrades.

While F-Type Project 7 features performance-focused engineering for road use, its design has been kept true to the original Project 7 concept.

Key design elements include the D-type-inspired fairing behind the driver’s head, shorter windshield, new front bumper, and downforce-increasing aerodynamic modifications – including a carbon-fibre front splitter, side skirts, rear diffuser and adjustable rear spoiler. However, the single-seater concept has been transformed into a two-seater, with rollover hoops for both driver and passenger now integrated into the design. 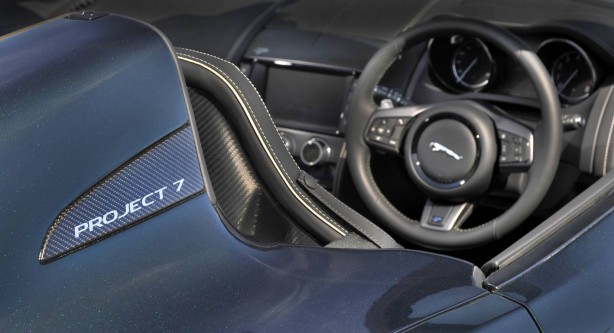 Ian Callum, Director of Design, Jaguar, said: “F-Type Project 7 is the perfect example of how, as a design team, we can move quickly with our engineering colleagues to go from concept vehicle to production reality – we’ve pushed the boundaries of what’s possible without losing any purity of form.”

“Modern, purposeful and with a stance that screams intent, F-Type Project 7 is the perfect contemporary embodiment of the D-type that inspired it,” said Ian Callum.

Inside, the F-Type Project 7 features lightweight race-inspired bucket seats, which are finished in a quilted racing-style diamond pattern. Four-point racing harnesses are available as an accessory. The interior features carbon-fibre veneer inserts on the console, an Alcantara steering wheel (with leather option), machined aluminium gearshift paddles and bespoke treadplates with the Project 7 logo.