Hot on the heels of the unveiling of the new generation LS flagship saloon in January, Lexus today took the covers off the LS 500h, a hybrid variant joining the LS 500 first revealed at Detroit.

Taking centre stage at Lexus’ booth at the Geneva motor show, the LS 500h is equipped with the new Lexus Multi Stage Hybrid System, combining a 3.5-litre V6 petrol engine with two electric motors, together delivering a total output of 264kW accompanied by 348Nm of torque.

It does this through the combination of 4-speed automatic gearbox and continuously variable transmission. The new 4-speed auto-CVT partnership is able to multiply each of the first three physical gears in the automatic transmission three times – turning three real ratios into nine virtual ones; the fourth physical ratio acts as an overdrive, enabling the V6 to spin at a much lower rpm when cruising, saving fuel.

In essence, the additional automatic gearbox works in combination with the CVT to deliver 10 specific gear ratios, just like the 10-speed auto in the non-hybrid LS 500. Driving the rear wheels, the powertrain enables a 0 to 100km/h acceleration time of just 5.4 seconds, identical to that of the LC 500h coupe. A first for a Lexus hybrid, the LS 500h is also capable of running at higher speeds – up to 140km/h – with the petrol engine shut off.

Lexus LS Chief Engineer Toshio Asahi explained: “Developing such a flagship model required a massive paradigm shift. Rather than being bound by the conventions that had defined luxury cars in the past, we aimed to create a car with innovative, emotional and sensual appeal that would draw customers’ eyes away from other luxury cars and provide entirely new values.”

The drivetrain debuts a new gear-shifting algorithm incorporating DMI (Driver’s Mind Index), which can adjust gear shifts to suit the driver’s style and behaviour without them having to select a different drive mode to get the kind of performance they want from the transmission. 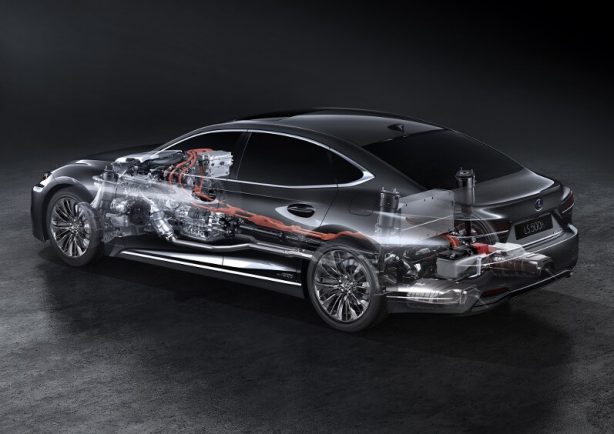 Lexus has finally moved to lithium-ion battery for its new hybrid system in the LS. The new battery is 20-per-cent smaller and lighter than the nickel-metal hydride unit featured in the current Lexus LS 600h, yet has a higher power density. It increases the luggage capacity by 25 litres.

First announced for the LC 500h, the Lexus hybrid battery features a satellite construction design in which the cell voltage monitoring function has been made separate from the battery ECU. This allows for efficient use of what would otherwise be empty space inside the battery pack to house the wiring harness and battery cooling blower, thus reducing the unit’s overall dimensions. The cooling blower itself has been made thinner yet more powerful. 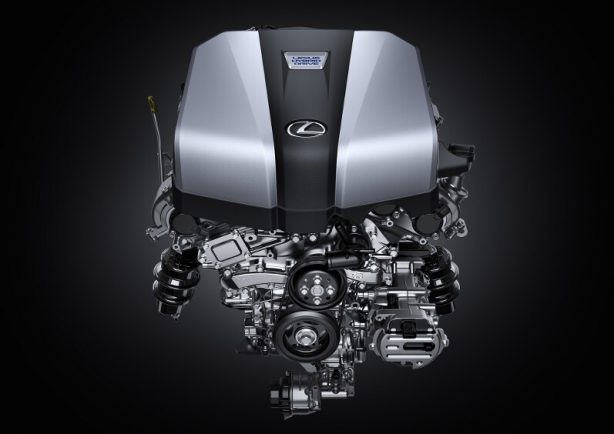 The LS 500h is built on the new Lexus Global Architecture – Luxury (GA-L) platform, which made its debut in the LC coupe and now, with a longer wheelbase, underpins the new LS.

The GA-L platform is claimed to be the stiffest Lexus has yet created, promising improved handling, ride smoothness and cabin quietness through a low centre of gravity and optimum weight distribution.

Inside, the LS’ cabin features an ‘organically-shaped’ dash design to support a “seat-in-control” layout that emphasises the driver’s ability to operate all systems without the need to change posture.

New seat designs include available 28-way power front seats that feature heating, cooling and massage, all of which are also available for the rear seats as an option. The rear seats can further be optioned with Shiatsu massage and a raised ottoman as part of a wider rear seat luxury package, offering the most legroom of any previous-generation LS. In addition, the seat behind the front passenger in this optional package can be reclined up to 48 degrees, and can be raised up to 24 degrees to help assist the rear-seat passenger in exiting the vehicle. 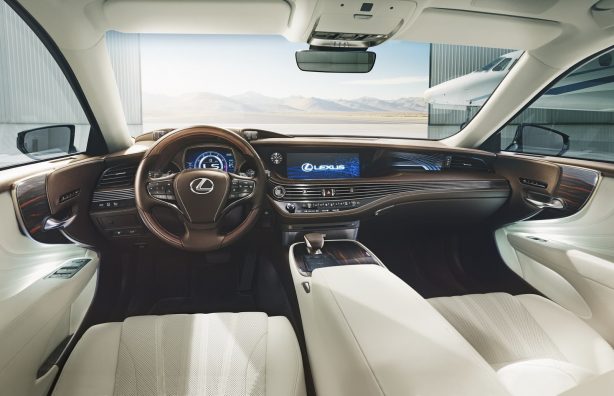 Because the new LS is lower than previous versions, Lexus for the first time equipped the available air suspension with an access function. Activated by unlocking the car with the smart key, access mode automatically raises the vehicle and opens the seat bolsters to welcome drivers behind the wheel.

Active safety technologies include a world’s first system with Intuitive Pedestrian Detection and Active Steering within the lane in which the car can automatically brake and steer around a person while staying in the lane.