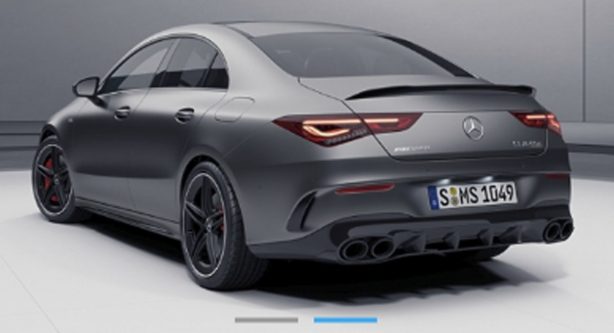 First published by German publication, Auto Bild, the image was accidentally found by one of its readers who were looking for more information about the AMG Night Package for the CLA 35.

The image might look like a CLA 35 at first glance but that model only has a dual exhaust system while we know the new CLA 45 has a four-pipe exhaust system. A further clue can be seen on the badging to the right, which appears to read “CLA 4” with the last letter or two being too obscure to make out.

If this is indeed the CLA 45, we are slightly disappointed that they look relatively similar. Besides the extra tailpipes, changes appear to be limited to a different set of five-spoke alloy wheels and red brake calipers.

Not much is known at this stage about the CLA 45 except that it will have a new turbocharged 2.0-litre four-cylinder engine that churns out over 300kW of power – a huge leap over the current model’s 280kW and 474Nm.