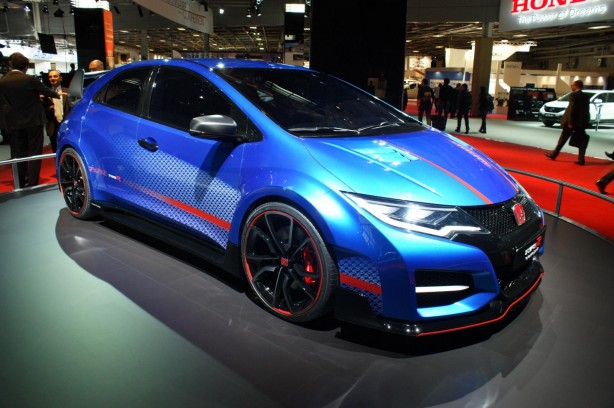 The highly anticipated all-new Honda Civic Type R took centre stage at Honda’s booth at the Paris Motor Show today. The Civic Type R Concept “Series 2” may wear the concept badge at the show, but the car you see here is pretty much the production version, safe a few details.

Set to hit European showrooms next year, with the rest of the world to follow, the concept is powered by a 2.0-litre turbocharged i-VTEC four-cylinder engine producing more than 206kW (280PS). Honda has not announced detailed specifications, but in a new video released today along with its premiere in Paris, the company said it will deliver “unmatched performance compared to any previous Type R car.” That includes all generations the Civic, Integra, Accord and even the NSX.

“Honda has had four Type R model derivatives – the Civic, Integra, Accord and NSX. The engine in this new Honda Civic Type R is unrivalled against all of them in terms of raw power, torque and engine response,” said Suehiro Hasshi, Large Project Leader for the Civic Type R at Honda R&D in the promotional video.

Honda has been determined to crush the current record for the fastest lap around the Nürburgring for a series production front-wheel drive with the new Civic Type R. The record is currently held by the Renaultsport Mégane 265 Trophy with a lap time of 8:07.97. 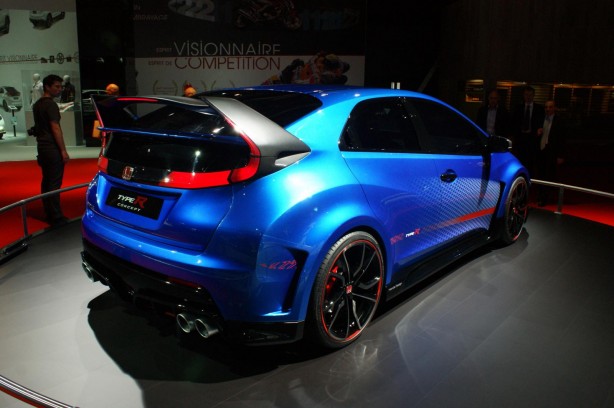 Besides the powerful engine, Honda has also undertaken a number of engineering innovation said to make the new Civic Type R a true driver’s car.

Chief amongst them is the debut of Honda’s new ‘+R’ button. Located to the side of the steering wheel, once pressed, it activates ‘+R’ mode that heightens engine response, with torque-mapping changed to a more aggressive and performance-focussed setting. Its steering becomes more responsive and, together with the new four-point Adaptive Damper System, is claimed to deliver the ultimate handling experience.

“In default standard mode, the Civic Type R is exceptionally agile, an everyday sports car with an enjoyable and fluid acceleration. The ‘+R’ button brings out a more dynamic and athletic car for the driver, to set pulses racing. The difference in character is immense. The ‘+R’ mode is extreme; the car is ideal for track use and will be appreciated by the genuine sports-driving enthusiast,” Hasshi explained during the car’s unveiling earlier this week.

A new four-point Adaptive Damper System has also been developed specifically for the Civic Type R. It automatically adjusts the front and rear suspension damping force stiffness in a split second, based on driving conditions. This allows the new Civic Type R to provide a comfortable ride during cruising, yet become firm and agile when high-performance handling is required.

The new UK-built Civic Type R will follow in the footsteps of its predecessors with a six-speed manual transmission. The development team selected this option to maximise driving enjoyment.

Previous Audi TT Sportback concept unwrapped with 294kW from 2.0 TFSI
Next Over one-third of Holden’s lineup to be European