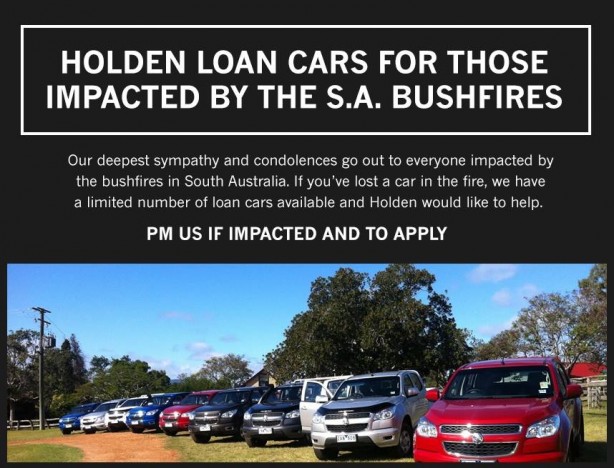 Holden has announced that it is doing its bit to help bushfire victims in South Australia. The local manufacturer has taken to social media to offer a number of loan cars to people who have lost their vehicle in the devastating bushfires that have swept across the Adelaide Hills.

Affected people are asked to make contact through Holden’s Facebook page or Twitter, if they were without a car following the significant property loss that occurred in the Sampson Flat fire. The image above is extracted from the company’s Facebook page.

Holden’s Corporate Affairs Manager for South Australia, Sophie Milic, said that Holden felt strongly about wanting to help those who had lost so much in recent days.

“Our Elizabeth factory isn’t far from the fire grounds and several of our employees live in the affected areas, so we’re connected to this community and we want to do what we can,” Ms Milic said.

“Particularly for those who have also lost houses, being without a car means they will have difficulty independently travelling between temporary accommodation and their property to begin clean-up efforts, and frankly that’s one more worry they don’t need at this time.

“Offering a loan car is just one small thing we can do to assist people to start getting their lives back in order.”