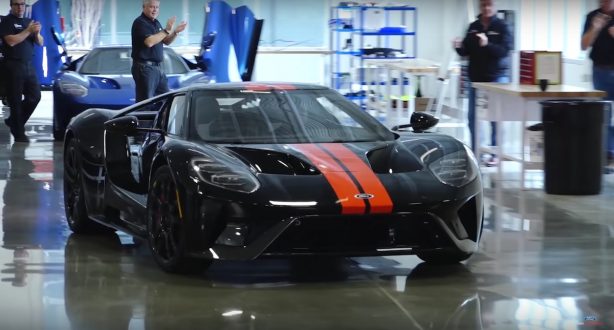 Ford is celebrating a milestone with the first series production examples of the Ford GT rolling off the company’s production line in Canada.

The first unit will go to the company’s Executive Chairman, Bill Ford, while the black GT with orange stripes here – driven off the production line by Ford’s Executive Vice President, Raj Nair – will be used as a marketing vehicle.

Production of the Ford GT is limited to just 250 units annually, with the first 500 cars snapped up by wealthy customers which Ford handpicked from a field of 6,000 applicants via a stringent application process. The overwhelming response has forced the company to extend the production run of the supercar for an extra two years.

Despite numerous press releases, Ford has been tight lipped about the GT’s technical details, revealing only that its twin-turbo 3.5-litre V6 EcoBoost engine packs around 514kW of power. Some insiders reckon it could produce a lot more power.