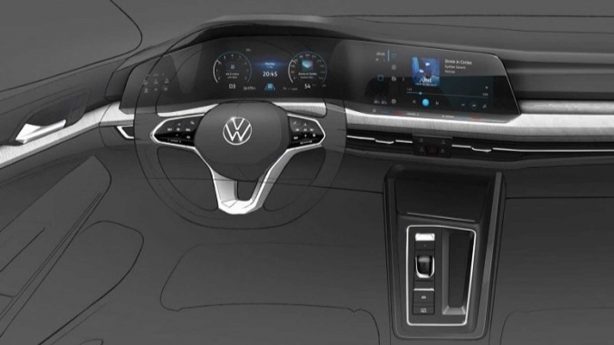 Ladies and Gentlemen, feast your eyes on the first official sketch of the upcoming Volkswagen Golf 8’s interior!

Buried deep in the company’s 39-page 2019 Annual General Meeting PDF document, the teaser sketch show’s the next-generation Golf’s interior taking a massive leap in terms of presentation, in line with Volkswagen’s promise to give the new Golf’s cabin an unparalleled level of technology.

It appears the new model will feature a fully digital instrument cluster that is accompanied by a large infotainment screen right next to it, with slim-line air-con vents below them. The air vents also have an integrated look with the rest of the dash.

It’s hard to make out the exact details due to the fussiness of the sketch, but it appears there is only a cluster of four buttons on the entire dash between the centre air vents along with a hazard light button in the middle.

Further down the centre console is a large lidded storage area that probably doubles as a wireless charging pad for a smartphone. Like the latest Touareg, the new Golf will adopt a compact electronic gear lever.

Meanwhile, the new steering wheel houses a series of buttons but whether they are touch-sensitive or actual buttons is anyone’s guess.

Most interesting of all, there seems to be another display on the left hand side of the instrument cluster. We are not sure what they are for but they could be a replacement for the headlight switch that is found on many Volkswagen Group vehicles. 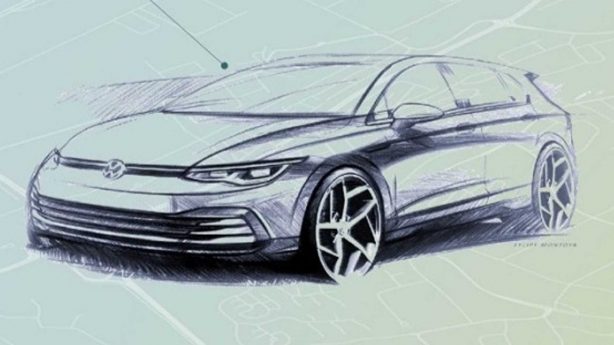 The PDF document also confirms the new Golf will make its world debut at Wolfsburg in October and that it will adopt a mild hybrid setup. The hatchback will also be available as plug-in hybrids with a maximum range of 80 km in pure electric mode.

Along with the interior sketch, the document also provided us with a preview of the Golf 8’s exterior, which we have pretty much seen in previous spy shots.