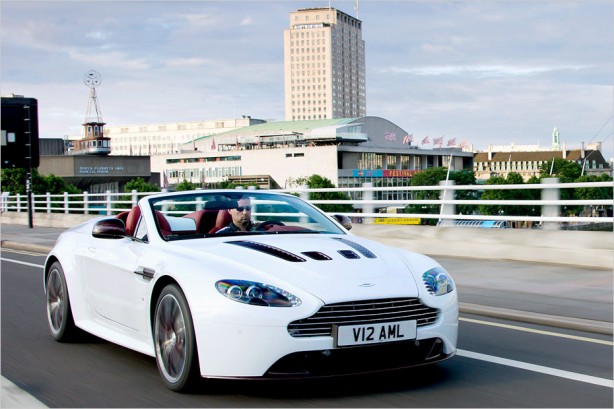 Aston Martin has finally listened to customers’ demand and launched a sexy drop-top V12 Vantage Roadster. The convertible is a roadster version of the V12 Vantage Coupe, but with a limited production run of only 101 examples worldwide.

The V12 Vantage Roadster shares the same 380kW/570Nm 6.0 litre twelve cylinder engine as the Vantage Coupe and the DBS. Putting the power down the road is a six-speed manual transaxle transmission. No sequential gearbox with pedal shifting will be offered at this stage. 0-100km/h in the roadster is accomplished in just 4.5 seconds, three-tenths slower than the coupe, with a top speed of 305km/h.

Like the Vantage Coupe, a sports button in the dash sharpens throttle response and controls a flap in the exhaust to produce a raunchier exhaust note.

Most convertibles weigh more than their coupe counterparts due to the added mass of the mechanism for the retractable roof. Not so in The V12 Vantage Roadster as the drop-top gets carbon fibre front lip spoiler, front grille, wing mirror housings, tail-light inserts and rear diffuser. The carbon fibre theme extends into the interior of the car with abundance use of carbon fibre inserts. For optimal quality, the carbon fibre front spoiler and rear diffuser are hand made. To shed weight even further, the lower centre console switchgear is made of glass.

The Vantage Roadster will be retailed in Australia for A$431,561 plus on-road costs, making it A$44,669 more expensive than the V12 Vantage Coupe.