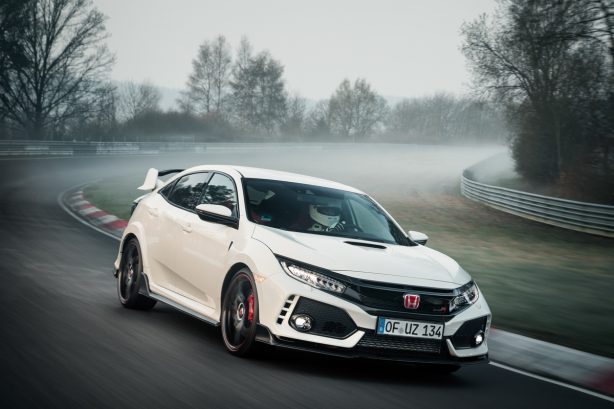 The 2017 Honda Civic Type R is now the world’s fastest production front-wheel drive car at the legendary Nürburgring test track, setting a new benchmark lap time ahead of its global roll out later this year.

The hot hatch lapped the famed German circuit in a record 7 minutes and 43.8 seconds, an improvement of nearly 7 seconds compared to the previous-generation Civic Type R, and over 3 seconds faster than the previous FWD record set by the Volkswagen Golf GTI Clubsport in May last year.

Due to arrive into Australian showrooms in the fourth quarter of this year, the new Civic Type R is based on the new Civic Hatch and has been engineered from the ground up to ‘deliver the most rewarding drive’ in the hot hatch segment both on the road and on the race track, according to Honda.

At the heart of the Type R is Honda’s 2.0-litre VTEC turbocharged four-cylinder petrol engine from the previous generation (not sold in Australia) but optimised and refined to produce 235kW and 400Nm of torque. Throttle response and driveability are also said to have improved thanks to optimised engine control settings. The car’s six-speed manual now also gets rev matching on downshift.

Compared to the previous Type R, torsional rigidity is further improved by 38%, thanks to a lighter yet stronger body shell with further use of adhesive in key areas.

The front Macpherson strut suspension of the standard Civic hatchback is revised with new geometry to minimise torque steer and maximise sporty handling. At the rear, the new independent multi-link system of the standard car is improved with the use of unique high rigidity suspension arms.

Ryuichi Kijima, the lead chassis engineer for the Honda Civic Type R development says the quicker lap time over the previous model can be attributed to the significant improvements made to the new Type R.

“The cornering speed achieved in the new Type R is higher because the car features a wider track and tires, a longer wheelbase, a new multi-link suspension in the rear and optimised aerodynamics that improve stability,” says Kijima san. “For example, drivers typically enter the corner after Metzgesfeld at around 150 km/h. Even at this medium-speed corner, the speed is around 10 km/h higher due to the new Type R’s excellent stability. So, with improved cornering performance, we can increase the speed throughout the lap, helping the new Type R to achieve a much quicker lap time.”

Honda claims the pre-production development Civic Type R that achieved the lap time was technically representative of production specification. A full floating roll cage was installed for safety reasons, but did not provide any additional rigidity to the body frame. The extra weight of the cage was compensated for by the removal of the Display Audio system and rear seats. The car was using street legal, track-focused tyres.

Production of the new Honda Civic Type R is anticipated to start in summer 2017 at Honda of the UK Manufacturing (HUM) in Swindon – the global manufacturing hub for the 10th generation Civic hatchback.

The Honda Civic Type R will go on sale in Australia in Q4 of 2017, with full specifications and features to be announced closer to launch.

Previous Infiniti Q60 Project Black S given green light to take on BMW M4
Next Is this the C8 Corvette headed to Holden showrooms in 2019?