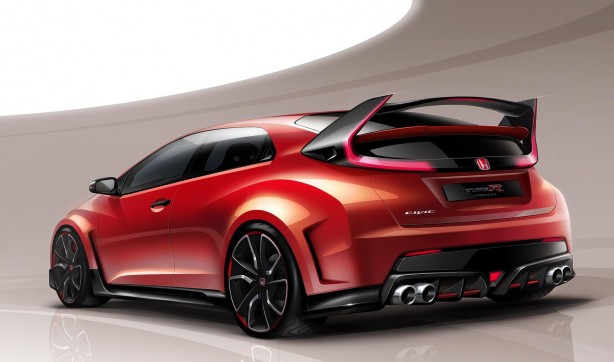 Honda has today released a sketch of the upcoming 2015 Civic Type-R ahead of its scheduled debut at the Geneva Motor Show in March.

The UK-built Civic Type-R will be powered by Honda’s all new 2.0-litre four-cylinder VTEC turbocharged engine producing at least 206 kW but the company is targeting an output of 300 hp (224 kW). The power drives the front wheels through a six-speed manual gearbox.

In November last year, a near production ready Honda Civic Type-R was caught undergoing testing at a track. The prototype was almost completely undisguised, other than a matte black exterior finish.

The new Honda Civic Type-R will be the first turbo-powered model from a manufacturer more well known for its high-revving naturally aspirated engines. The company is aiming to dethrone the current record holder for the fastest production front-wheel-drive car around the Nürburgring circuit – the RenaultSport Megane 265 Trophy, which completed the lap in 8:07.97.

The Civic Type-R will not only sport one of the most powerful turbocharged four-cylinder engines, but gets bespoke chassis setup, from wider tracks and electronic driver assist systems to sizable Brembo brakes that hide behind 19-inch wheels.

The hot-hatch will also get a sports body kit that includes wheel arch extensions, more aggressive front grille and bumper and a massive rear spoiler. At the back, the rear diffuser is flanked by twin pipes on either side. Whether or not the rear spoiler integrated rear lights and air-breathers behind the front and rear wheel fenders get past down to the production model remained something to be looked out for at next month’s launch. 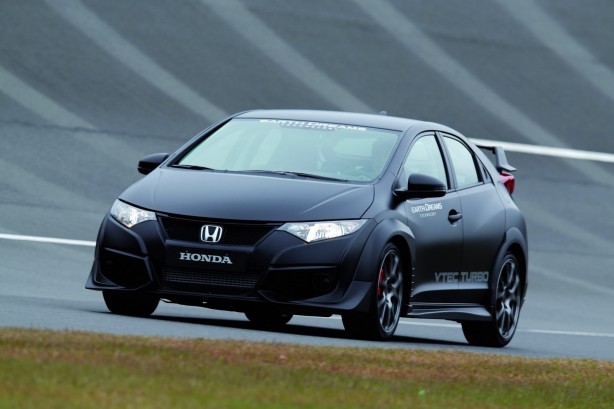