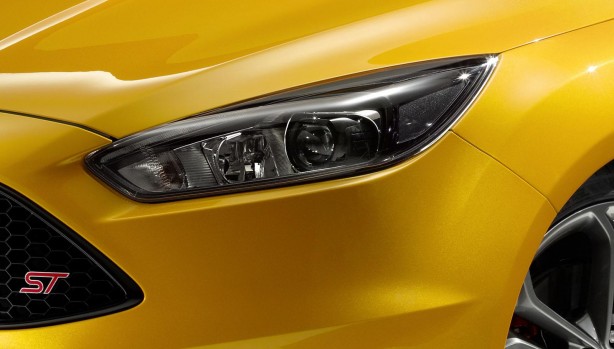 The new 2015 Ford Focus ST is set to make its global debut at the Goodwood Festival of Speed on June 27.

Benefitting from the technology and quality improvements revealed earlier this year for the new Ford Focus, the new Focus ST will be available for the first time in diesel-powered version. The company has remained tight lip on details of the new diesel engine, but expect a 2.0-liter TDCi engine that develops 135 kW.

The petrol powered Focus ST will carry over the current model’s 2.0-litre turbo four producing 184 kW of power and 360 Nm of torque.

The brand has also released a teaser image of the Focus ST which shows part of the hot hatch’s sleeker headlight and new honeycomb grille, along with a video of the car being driven on a track.

At the new Focus ST unveiling, Ford will be teaming up with Sony Computer Entertainment to stage the first-ever “virtual vs real” race on the Hill. On its first run each day, the new Focus ST will compete in real time against the Focus ST featured in the Gran Turismo 6 game for PlayStation 3.

A designated gamer at the Ford stand will match skills against Ben Collins – formerly “The Stig” from Top Gear – with the action displayed on big screens throughout the festival. Visitors to the Ford stand also have the chance to record their own times on the Gran Turismo 6 simulators.

Also starring at Goodwood will be the all-new Ford Mustang that makes its first U.K. appearance. A 5.0-litre V-8 Fastback will take part in the Supercar Class, with Ford Team RS vehicle dynamics specialist David Put at the wheel. Ford also will display a Mustang convertible.

Previous Subaru may discontinue BRZ. Maybe
Next 20yo crashed his brand new BMW M4 in Germany