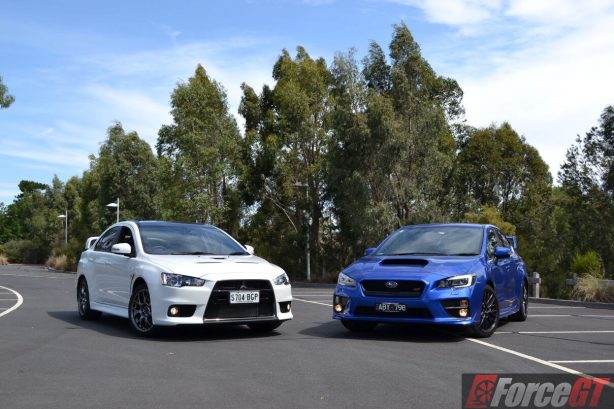 Subaru WRX STI and Mitsubishi Lancer Evolution, two of the most recognisable name plates in world rally since the mid-90s. They were deadly rivals right from the start, both designed with only one aim in mind – to dash across the uncompromising terrain of rally stages as fast as possible. Both camps switch podium places as often as they change gears in the course a race, culminating to the STI’s 38 World Rally Championship wins against the Evo’s 26 victories.

After almost a decade of intense competition on the gravel, both manufacturers decided to call it quit. But the cars lived on and continued to battle it out on the streets, pioneering a whole new segment, one where a mass market small car is stuffed with anything that makes more power and everything that keeps it unflustered around corners.

Both the STI and Evo became youth magnets, luring young drivers stepping up from game consoles and go-karts and offering them the same kind of fantasy rides, but in the real world. The formula is straightforward: turbocharged, all-wheel drive, and an exterior so rebellious it shouts the cops, who? 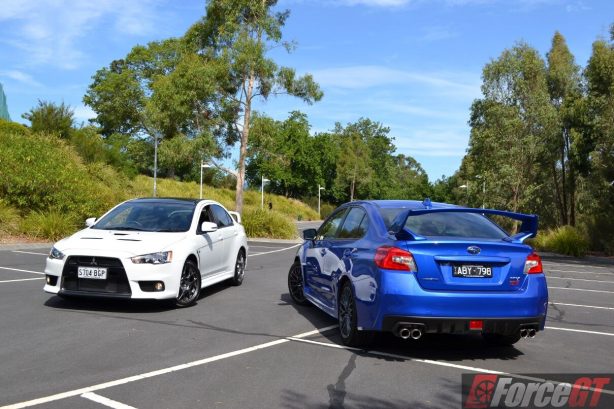 Now in its fourth generation, the $49,790 plus on-roads WRX STI is almost $4k cheaper than the Evo. It packs a 2.5-litre turbocharged 4-cylinder boxer engine channelling 221kW and 407Nm to all four wheels through a six-speed manual gearbox and Subaru’s renowned symmetrical all-wheel drive system. On paper the Subie sprints from rest to 100km/h in 4.9 seconds, but unless you are willing to side step the clutch at 4,500rpm, realistically you will be looking at a time of around 5.2 seconds with a less brutal launch.

The Evo enters its final chapter of life with the $53,700 plus on-roads Evo X Final Edition, the last hurrah for the iconic sports car before it goes under the axe as Mitsubishi shifts its focus on SUVs and electric vehicles. The 4B11 2.0-litre turbocharged 4-cylinder MIVEC engine in the standard Evo X was sent back out to battle, but tweaked in the Final Edition to produce 226kW and 414Nm, up from the standard car’s 217kW and 366Nm. Driving through a five-speed manual gearbox, the Evo matches the STI in the sprint to 100km/h, recording a time of 5.3 seconds. 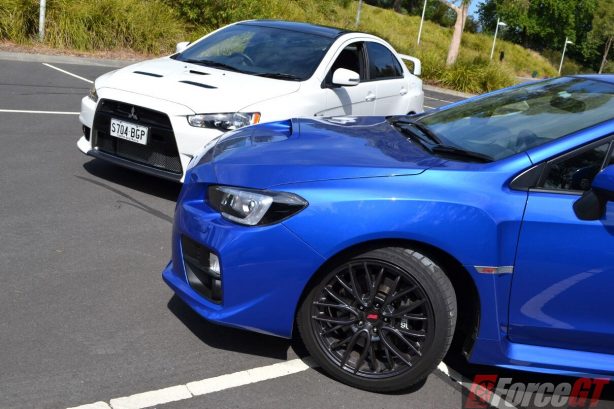 Both cars boast advanced all-wheel drive system, with more moving parts than a pinball machine. The STI’s symmetrical AWD setup consists of three differentials. A centre diff splits power front and rear and is capable of shuffling up to 80% of torque to either axle. Up the front a helical differential manages left/right torque transfer as well as torque vectoring, while a Torsen LSD does the same to the rear axle. Banks of computers and sensors work to ensure torque is distributed to the correct places. But if you’re keen, the system also allows manual front/rear biasing of torque. Send everything to the back and the STI can even smoke the rear tyres in a four-wheel drift.

The Mitsubishi system is even more sophisticated. Called the Super All Wheel Control (S-AWC), three differentials optimise the flow of power, with the centre diff shifting torque between the front and rear axle based on available traction, and a helical differential takes care of left/right torque split at the front. At the back is where the Evo system differs to that of the STI. Unlike Subaru’s mechanical system, the rear differential in the Evo is electronically operated, biasing torque to the left or right rear wheels based on yaw sensors, hence its name Active Yaw Control (AYC). It is also at the back wheels where torque vectoring takes place. Unlike the STI, the Evo doesn’t allow driver to manually bias torque to the front or rear, but offers three driving modes – Tarmac, Gravel and Snow. 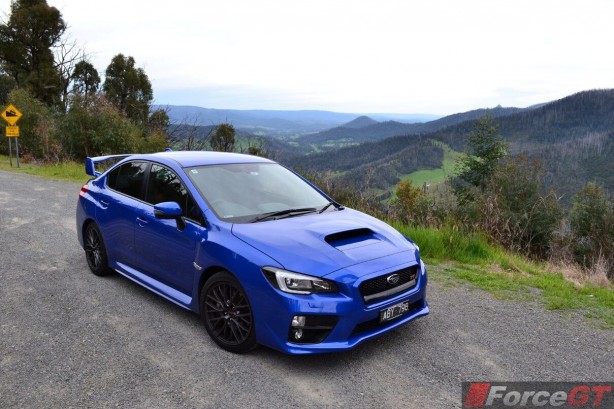 Despite the different approach in putting power to the ground, both these cars are capable of tearing up corners with extreme grip and terrific composure, stringing apexes into a sustained, high-G indulgence. The STI’s more mechanical AWD setup rewards drivers with a more tactile and connected driving feel. You flow the Subaru from corner to corner, taking full advantage of its better throttle adjustability and a more communicative steering. Wringing an STI out has never been so pure and involving.

The Evo, on the other hand, is more of a point and shoot weapon. In the Evo, you take each corner as its own entity, which means going slow and tidy on entry, point the ultra sharp steering wheel at the apex, and let the electronics sort the rest out for you. Everything is more aggressive in the Evo – AWD power transfer, torque vectoring, even the brakes. On corner exit, the Evo’s stronger torque and punchier top end will leave the STI struggling to keep up. 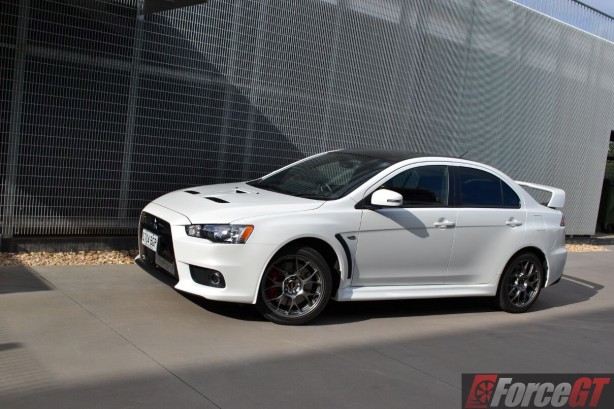 Both cars come standard with powerful Brembo stoppers all-round. While the STI offers better brake pedal feel, it’s the Evo’s brakes that will last longer on a track, resisting fade even long after the brakes in the STI have given up.

To Subaru’s credit, the STI’s gearbox is one of the sleekest and sportiest we have come across. Short throw and precise, it’s an absolute joy to operate. Coupled with a light and progressive clutch pedal, the STI is delightfully easier to drive both on road and track.

In contrast, the Evo’s box feels clunky and the clutch isn’t as refined as the Rex. It takes a fair bit of finesse to drive the Evo smoothly. The 5 speeder is deemed stronger than a 6 speed box, which we don’t doubt in track application, but the lack of a sixth gear just doesn’t make sense on the road. Cruising on the freeway, the revs sit annoyingly high, ruining fuel economy and producing more engine noise. And the Evo was built in 2016, the last time I checked. 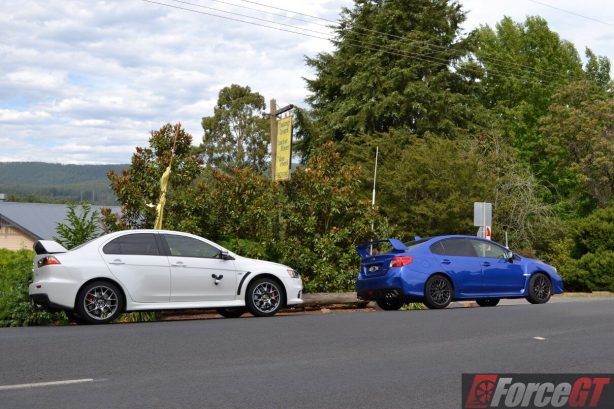 There’s little in it for ride quality. Low-speed ride in the STI is jittery, but it smooths out at speed. The Evo is slightly firmer still, not helped by those thinly cushioned Recaro buckets. However, both cars are far from thrashy and start settling down above 80km/h.

The all-wheel-drive turbo arena have seen quite some changes in recent years with the arrival of the Germans, but nothing is more relevant than pitting these two Japanese heavyweights against each other for one last time, for their truly impressive bang factor honed from decades of rallying.

The latest iterations of Subaru’s STI and Mitsubishi’s Evo are still rocket ships packing giant-killing performance. Both are so focused on their performance that they are often forgiven for their lack of all-roundedness and complete disregard for the norm.

As with all previous shootouts between these two, only a hairline splits them both. The STI is no doubt the more engaging car to drive fast, thanks to its dynamic fluidity and sheer pace on just about any type of road. Its drivetrain is more polished and it also rides just a little bit better on the rough stuff.

Meanwhile, sharpness is the order of the day in the Evo. Its AWD system is more advanced and feels ‘digital’, even synthetic. It wants to make you go round a bend quicker than you could say your first name, no matter how hard you try to go slow. It also pulls harder all the way to its redline, and brakes stronger, too.

So, it all comes down to personal preference, really. But regardless of which car you choose, you’re sure to have lots of fun, both on road and track.

The next-generation Mitsubishi Outlander is slated to arrive in February 2021, bringing not just host …