After 23 years of being the benchmark for handling and performance, the Final Edition marks the end of the Legendary Mitsubishi Lancer Evolution line.


The Final Edition comes in at $53,700 excluding on-roads which by comparison, is actually well priced among the regular EVO X models, with the GSR sitting at $52,990 and the MR at $58,990. Despite being cheaper than the rest, all the best EVO features from the GSR and MR carry through with subtle tweaks hinting at it’s rarity. Overall only 150 units will hit Australian shores making it incredibly desirable among EVO collectors. 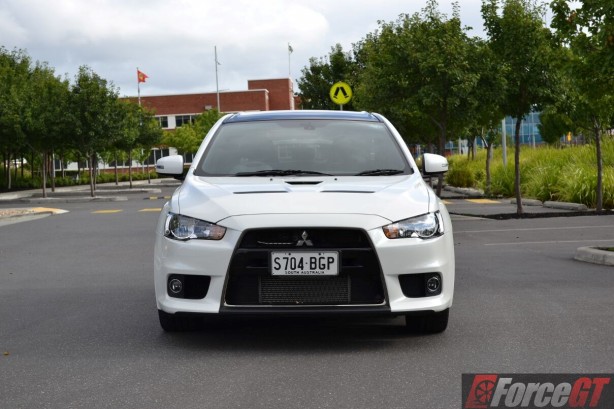 Exterior comes virtually identical to previous models. We could envisage some carbon-fibre trimmings, a more aggressive rear wing spoiler and wider flares but were disappointed to find an exterior hardly differing from the regular EVO X.

The EVO sits atop a set of 18-inch satin BBS wheels which feature black and gold centre caps, suitably matching the gloss black trimmings along the body. Contrasting through the spokes are a set of red Brembo calipers, providing the necessary stopping power to meet the demands of the high performance powerplant.

The rear remains unchanged with the exception of the red Final Edition badge. 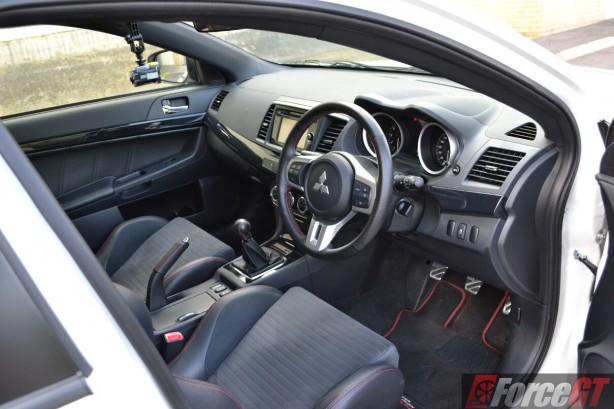 Similar to previous EVO’s, the interior is simple and functional. Mostly comprised of cheap hard plastics, we were thankful to see a combination of cloth and leather trimmings along the door cards and Recaro seats.

To signify the rarity of the Final Edition, Mitsubishi installed a plaque in front of the gear lever and stamped it with the cars delivery number; our test model was labelled AU0002. The seats, steering wheel, gear knob and carpets have all been lined with red stitching which are in-keeping with the Final Edition’s subtle design characteristics.

A 6.1-inch infotainment unit comes as standard equipment. However, it’s one of Mitsubishi’s most basic units, offering nothing more than audio playback and a reversing camera view. The lack of GPS navigation and sport functionality such as lap timing was rather disappointing. However, it did have DAB digital radio. To go along with the lackluster infotainment system are 4 low end speakers that distort heavily at higher volume. While this is a purist sports car, we would expect something more as a sendoff to the highly successful series. Why not the Rockford Fosgate kit available in the Pajero?

The steering wheel shows no difference from the EVO X, but the buttons are intuitively placed and are well spaced from the rim. No telescopic adjustment is available, but the vehicle is equipped with tilt adjustment. I do like that they have stuck with the full round wheel rather than the flat bottomed type.

As with most cars coming onto the market, the Final Edition is also graced with keyless entry. However, as a cost cutting measure, there is no push button start but rather a turn style knob located to the right of the steering wheel where the key would be inserted. 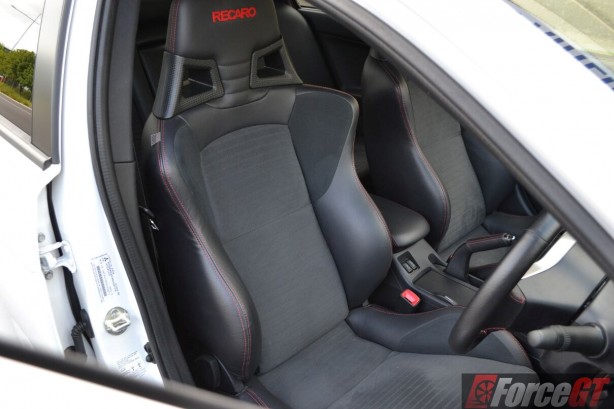 Maintaining EVO traditions, Mitsubishi seats the driver and front passenger into snug fitting Recaro racing seats. The deep bolstering kept us tight around the corners and were still incredibly comfortable for long trips. These racing seats perfectly compliment the performance of the vehicle, relieving the driver of the need to hold himself in during tight cornering. Typical of a racing bucket seat, they offer little adjustment; the seats can only move front to back and provide tilt. The rear seats are somewhat boring compared to the front, however they do seat up to 3 occupants and provide plenty of legroom. Back seats lack air conditioning vents and a 12v socket, however there is a fold down armrest. 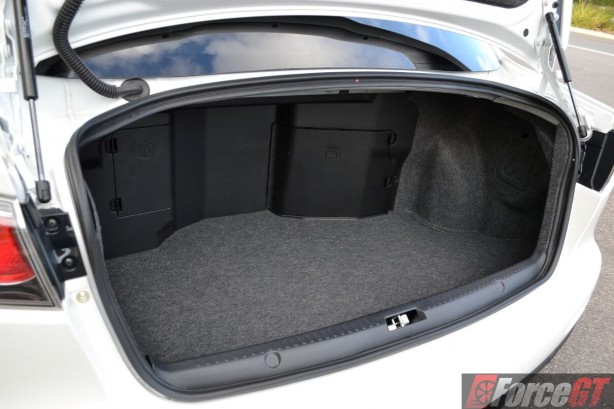 Boot storage is reduced on the EVO due to a relocated battery and water reservoir which now sit behind a fake wall. Regular Lancers typically have these under the bonnet but the turbo and inter-cooler take a large chunk out of the usable space under the hood. Relocating these components does however help with weight distribution as the weight is forward biased. The relocated parts mean that the back seats cannot be folded down to increase storage. The boot also lacks luggage tie down points. 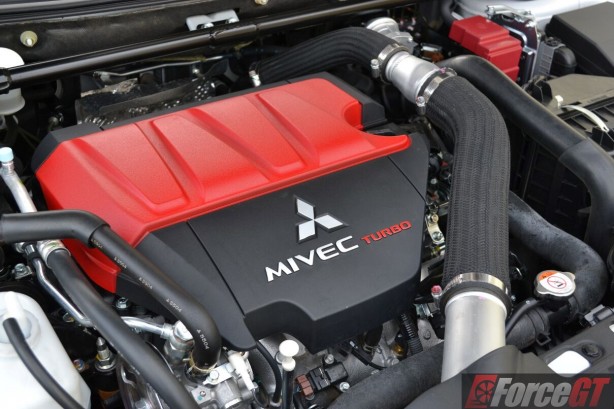 Under the hood is where the magic happens; the turbo 4 has been specially tuned just for the Final Edition. It now produces 226kW, which is up from the 217kW the regular EVO produced.

Turning the key-like knob awakens the sleeping beast. The startup note isn’t all that exciting, it’s a bit coarse and loud but put it through its paces and everything changes; the engine is strong, it’s angry and it doesn’t seem to ever run out of power.

In saying that, the boost comes online really late which is a shame since the redline sits at 7,500 rpm. The EVO’s peak torque is available at 3,500 rpm, In practice I’ve found 4,500 rpm to be the sweet spot. At this point you’re rocketing to redline with the acceleration gluing you to your seat, but again as I mentioned, redline comes too quick.

The lack of low-end torque is odd for a car producing 414Nm and 226kW. This is likely attributed to the 5-speed manual gearbox. Mitsubishi’s choice to go with a 5-speed over 6 goes back to the EVO 8. Mitsubishi offered both the MR and RS variant with a 6-speed automatic and 5 speed manual respectively. In order to provide these two gearbox variants, both designs had to fit into the same gearbox housing. Fitting the synchro’s became an issue in the auto so each cog width was reduced. Under heavy use, it was found that the 6-speed was far less reliable than the 5-speed due to extra heat induced and so from this point, Mitsubishi opted for all performance models and similar to remain with a 5-speed gearbox.

The gearbox isn’t the smoothest on the market, however gear changes are sharp and accurate. The lever also sits higher than others providing a rather long throw between gears. Initially, it put me out of sync with my clutch action, although it didn’t take long to get used to it.

While the 5 speed is more reliable, freeway economy suffers heavily. At 100km/h the engine hovers around the 3,000 rpm mark, far higher than what an average 6-speed gearbox would do. Mitsubishi claims a 10.2 L/100km economy score, our fuel consumption score was a far stretch away from that advertised – 4.8L higher in fact. The score reflects a good mix of city, freeway and spirited driving. It’s really hard to get down to the advertised score, I tried and failed. With our average score of 15 L/100km and the fuel tank at 45L you would be lucky to reach 300km from a tank. You will find yourself at petrol stations quite often. 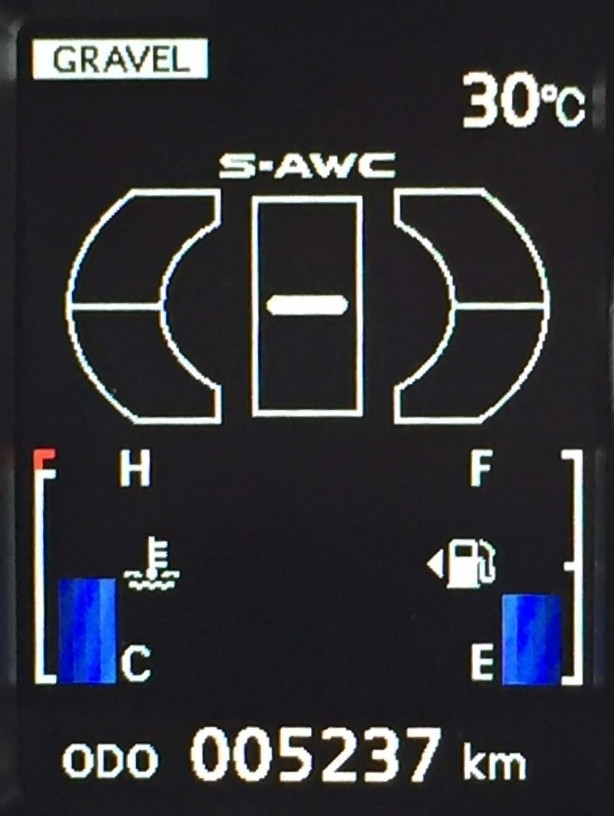 What the EVO is really known for is its superior handling. The car has always been praised for its effortless, almost digital steering. This is largely attributed to it’s S-AWC, which stands for Super All Wheel Control. S-AWC is Mitsubishi’s full-time all-wheel drive system, it combines Active Yaw Control (AYC), Active Stability Control (ASC) and an Active Center Differential (ACD) to regulate torque and braking force at each wheel.

Mitsubishi has 3 modes for different environment conditions; tarmac if on dry/paved surfaces, gravel for unsealed or wet roads and a snow mode for cold climate, snow covered surfaces.

Driving this car around town really won’t cut it. It’s just not possible to get a good feel for its cornering ability. In town, the S-AWC just sits idle waiting for you to give it a workout. Taking it out past Toolangi however, everything changes. Hard left, hard right, blasting through corners; its an incredible feeling to be able to point the car in any direction and come out of it without even a little tyre slip. Take any rear-wheel drive vehicle on the same route and watch them lag behind the EVO. S-AWC really is an incredible bit of technology, it’s confidence inspiring around tight turns even with considerable speed behind us. This will be a much missed feature jumping back into my personal hill climber.

Overall the Mitsubishi Lancer Evolution X Final Edition is a fantastic car for a spirited drive or on the track. We found it hard to hand the car back after the testing session. Those who are used to the creature comforts of a higher end car may struggle to live with it. However, in saying that, the car can still be used as a daily and with the well thought out and roomy interior of a Lancer, it can make for a good cross between a weekend racer and a family car.