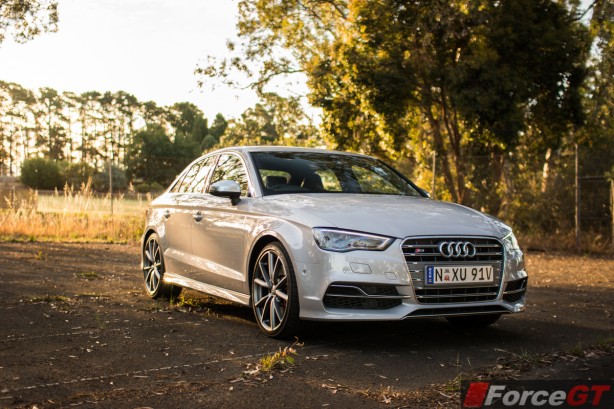 Both boasts illustrious pedigree garnered through many World Rally Championship wins in their respective careers. The WRX STI with 46 under its belt, the Mitsubishi Evolution with 26.

And while the STI has ditched its baseball cap and three quarters pants and morphed into a more mature sedan only offering, the Mitsubishi Evo – now in its tenth, and final iteration – has been relegated to the nursing home to wither amidst a room full of dusty trophies and fading press photographs. 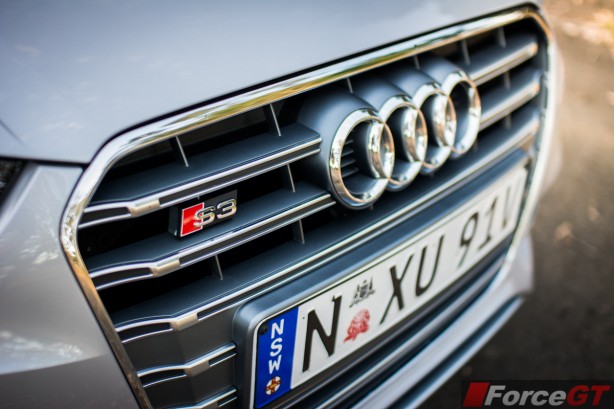 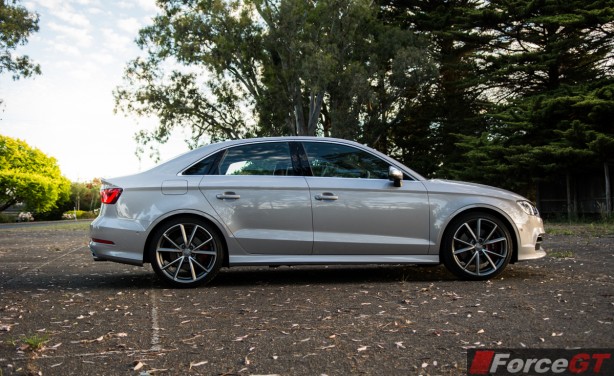 Like the natural world, a new species has evolved to take its place. This time though, the contender hails from Europe. While lacking the Evo’s racing pedigree, the new Audi S3 does carry respectable sporting DNA, with a long line of Quattro road and rally cars as close relatives.

It is the first time Audi has offered the S3 as a sedan, joining its Sportback (Audi-speak for a hatch) sibling that was launched late last year. Sporting a subtle yet muscular body kit, the S3 Sedan is handsome and classy.

First impression is good, too. Underpinned by Volkswagen Group’s versatile and modular MQB platform, the S3 Sedan rides 25mm lower than the regular A3 sedan and has a 6mm shorter wheelbase compared to the hatch. They both share the brilliant 2.0-litre turbocharged four-cylinder TFSI engine that churns out 206kW at 5,100-6,500rpm and 380Nm at 1,800-5,100rpm.

While 206kW isn’t exactly anaemic, keen-eyed readers may notice that Aussie drivers have been shortchanged by 15kW compared to their European counterparts, due to our “hot climate”. Happily though, MY15 models will get a whopping 4kW put back in, although drivers will hardly notice the difference. Safe for a bit of bragging rights at the neighbourhood barbie. 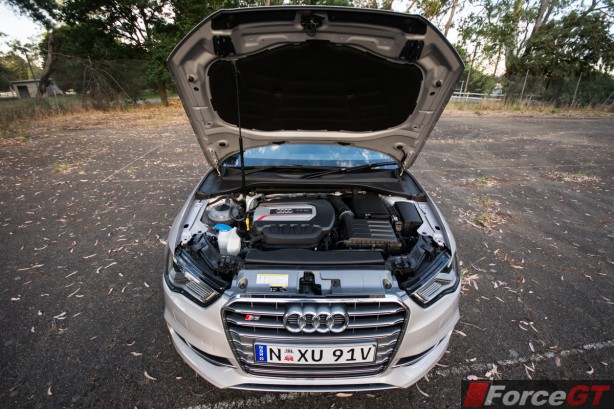 The powerplant, which is closely related to the Golf GTI’s, has been beefed up and gets pistons with stronger bolts, new rings, reinforced connecting rods, a larger turbocharger with a maximum boost pressure of 1.2 bar and a high-performance intercooler integrated into the water circuit to reduce the temperature of the compressed air.

The dual-injected engine (multi-point injection at low loads and direct-injection at high load) pushes power through a 5th-generation Haldex all-wheel drive system connected to a standard 6-speed double-clutch transmission (S tronic in Audi-speak), as fitted to our test car. A 6-speed manual is available as a no-cost option.

On paper, those numbers might seem inferior compared to the WRX STI (221kW/407Nm) or even the elderly Mitsubishi Evo (217kW/366Nm), but the sophisticated Audi engine – in conjunction with the launch control system (S tronic only) – is capable of blitzing the S3 Sedan from 0-100km/h in 5.3 seconds (tested), accompanied by theatrics of loud and explosive exhaust notes. 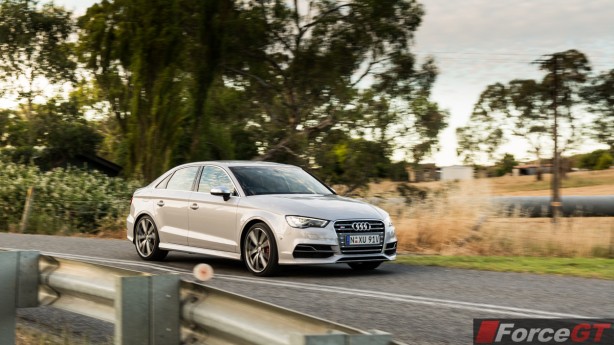 Bury your right foot on the throttle and the 1,460kg sedan responds with surprising vigour, dispatching its prodigious power through the rapid-fire six speed twin-clutch auto with hardly any hint of turbo lag.

While the engine note is angry and ballsy, it lacks the throbbing V8-like roar of the similarly engined Golf R. The sound, as with so many car engines, is manufactured, but still stirring.

The way the all-wheel drive system instantly engages never fails to surprise, either. Throw the car into a corner and its unflappable grip and seriously impressive amount of traction makes corner carving a child’s play, whether in the wet or dry. 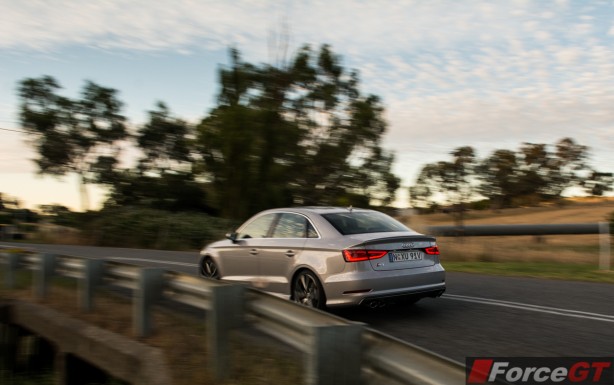 This, no doubt is aided by the S3’s four electronic differential locks integrated in the Electronic Stabilisation Programme that enhances grip. A form of torque vectoring system is also produced by way of braking the wheels on the inside of a bend to optimise body control and agility.

Its progressive steering is quick, direct and properly weighted. There is also a decent amount of feedback coming through to your fingertips.

The handling can be sharpened further by dialing in Dynamic mode via the Drive Select system. It stiffens the optional adaptive suspension (fitted to the test car), sharpens the throttle response and keeps revs higher for longer – perfect for blasting through country B-roads. 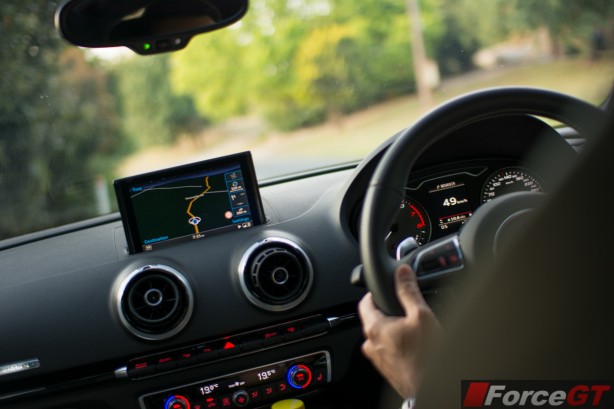 There is also an Individual mode that allows you to tailor the chassis to your requirement. Our preferred setting is leaving everything in Auto, but selecting Dynamic for the sports exhaust for that spine tingling ‘blarp’ on each upshift when you pull away from the lights each time. Awesome!

No matter which of the four settings you choose though, the S3’s ride is firm but not harsh, with only the nastiest potholes crashing through the chassis (this is alleviated to some degree by the Comfort setting). This also means the car feels planted around corners, with minimal body roll.

Around town, the car lives up to its premium badge with most road noise well suppressed. 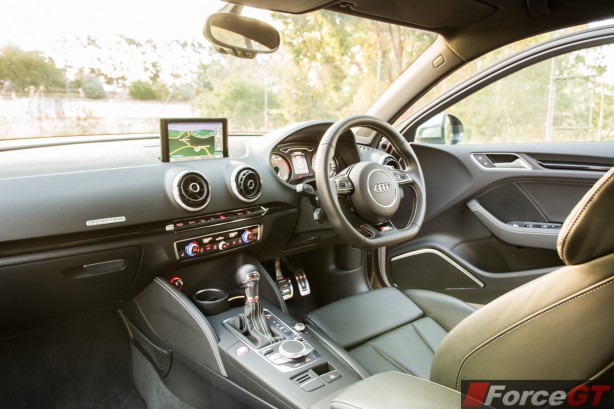 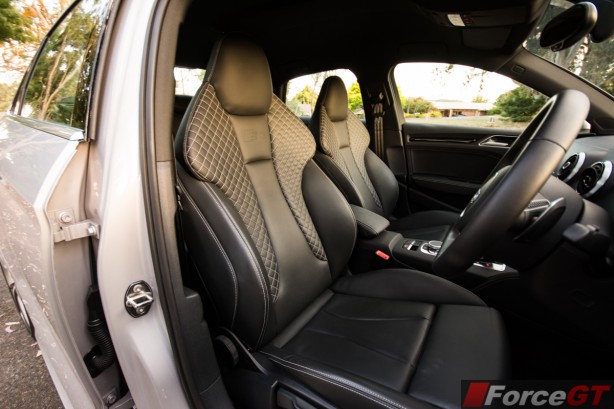 While they look magnificent and are generally supportive and comfortable, some of us find that they lack lateral support during aggressive cornering. We are also not fans of the Lotus Grey paint job on the test car, which looks dull and dated. Otherwise, the S3 sedan is near faultless.

The Audi S3 Sedan mixes scorching performance and agile handling with grown-up appeal and decent economy. Unlike the Mitsubishi Evo, the new challenger comes in a classy, desirable and understated package. And at $62,200 (RRP), the S3 Sedan is a bargain and one of the finest cars in Audi’s range.