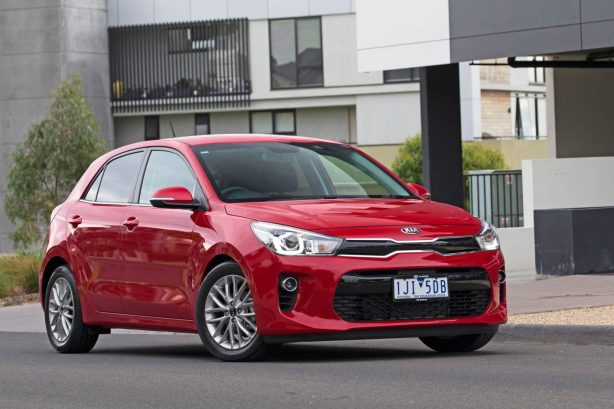 The Kia Rio is one of the more popular small cars in Australia and is the Korean manufacturer’s global hit, with annual sales approaching 500,000, accounting for 16% of Kia’s annual sales.

However, its profile in Europe is still a little lacking compared to segment leaders such as the Volkswagen Polo, Ford Fiesta, or even the Citroen C3.

So to fix the problem, the new 2017 Kia Rio has been given new looks that are… decidedly more European compared to the outgoing model. It’s hardly a surprise since Kia’s design boss is none other than former Audi crayon welder, Peter Schreyer.

Besides its new looks, Kia has also promised the Rio will take on a more European flavour in terms of its ride and handling.

To find out if its true, we took one out for a test.

Pricing for the four-tier line-up remains largely unchanged, except for the entry-level Rio S manual, which cops a $1,000 price increase to start at $16,990. The mid-range Si starts from $21,490, while our range-topping SLi tester starts from $22,990 – all excluding on roads and equipped with a 4-speed automatic. Only the entry-level S is available with a six-speed manual. 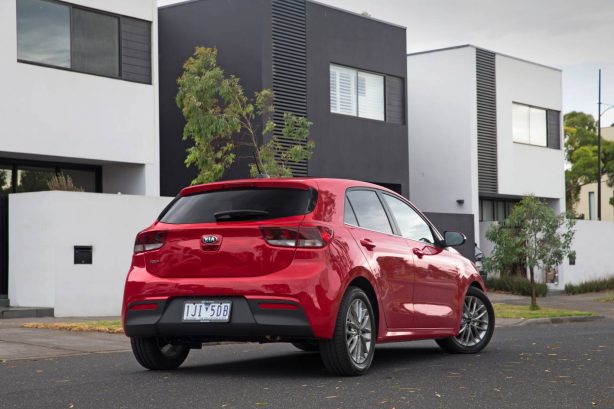 Unfortunately, in trying to appear more European, the new Rio has gone from stylish to a little… uninspiring. Yes, Kia’s design studios in Germany and California have given the car a more grown up and premium look, but it’s also far duller than its handsome forebear.

There’s a hint of VW in the Rio’s front fascia, especially in the U-shaped LED DRL, which is standard on the Si and SLi. Kia’s ‘tiger-nose’ grille has also been squashed and is now thinner and wider, while the front fog lamps have been pushed outwards to add greater visual width.

At the back, the rear section is now more upright with a shorter overhang. Our range-topper also features new LED taillights with Lamborghini-like arrow-shaped light signatures. 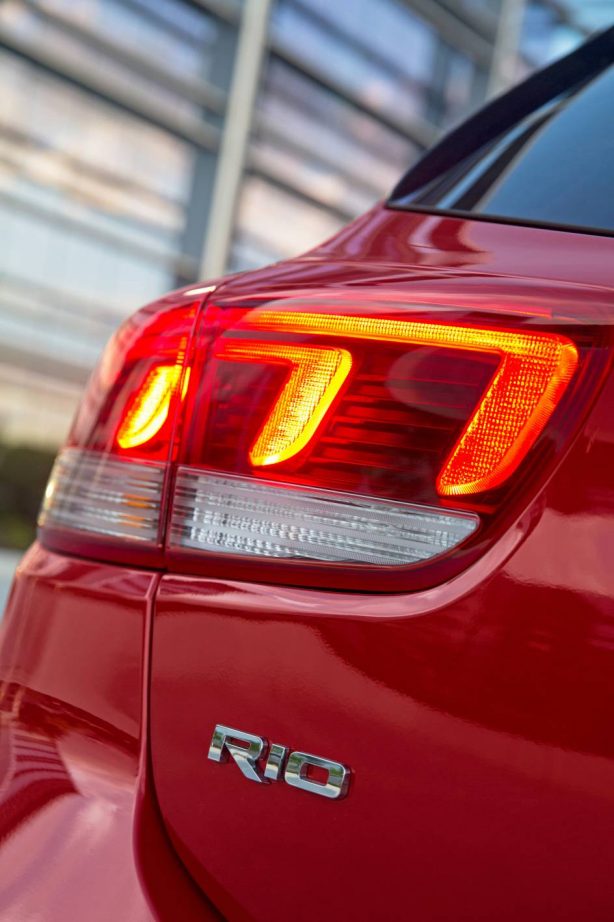 Now entering its fourth-generation, the Rio sits on an all-new platform and is 15mm longer and 5mm lower than its predecessor. Its wheelbase has also been stretched by 10mm, liberating more cabin and cargo space. Legroom grows to 1,120mm in the front and 770mm at the back, while shoulder room is more generous than most other cars in its class.

While the exterior design has taken a step backwards in our view, the interior, though, is a step in the right direction. It exudes a kind of premium feel that would do Volkswagen proud.

The sculpted dashboard is more ergonomically laid out than its predecessor. Like the exterior, straight lines run the width of the dash to give the cabin a wider appearance. The horizontal vents further add to the visual width, increasing the sense of space for occupants, while the silver trims enhance the premium feel. 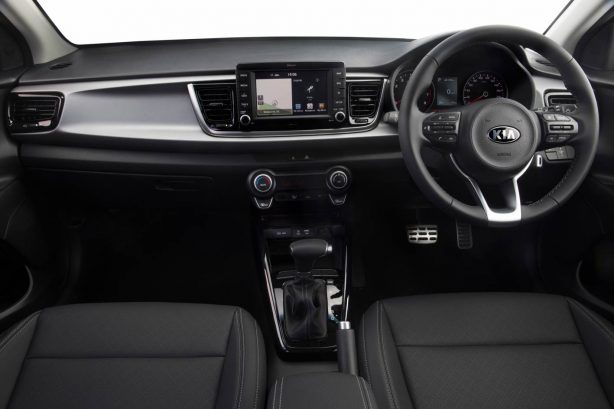 There’s the pre-requisite 7-inch floating touchscreen that is standard on all models. It’s relatively straightforward to use, with easily understood icons, decent satellite navigation graphics, DAB+ (Si and SLi only), Apple CarPlay and Android Auto.

Most switch gears are where you expect them to be, but the cabin materials, while looking fine and is no doubt solidly put together, is a medley of hard plastics that can’t quite match those in the Polo or Peugeot 208.

Its 325 litres cargo space, expandable by folding down the 60:40 split-folding rear seats, is slightly smaller than the Suzuki’s Baleno (355L) but significantly larger than the stingy Volkswagen Polo (280L).

It’s easy to find a comfortable driving position, too, thanks to a reach and rake adjustable steering wheel. 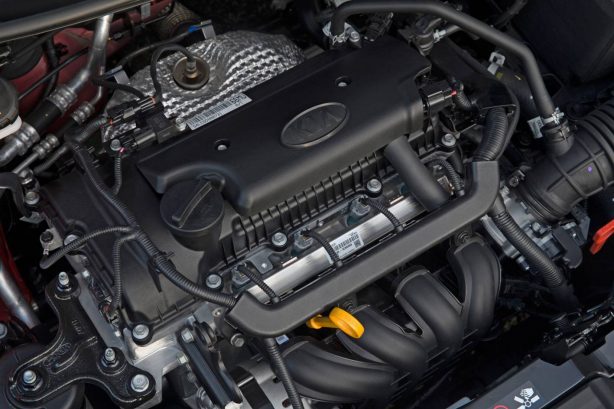 Like the exterior, the new Rio’s powerplant has taken a retrospective step, dropping the grunty 1.6-litre direct-injected 4-cylinder for a range-wide 1.4-litre MPI 4-cylinder with 74kW and 133Nm. Worst, all are matched with a 4-speed automatic transmission (except for the S, which is available with a 6-speed manual) that was already out of fashion even when Paul Keating was Prime Minister!

It’s disappointing, as the new platform clearly deserves more motivation. Steep gradient and overtaking are an uphill battle as the Rio’s modest output struggles to keep up to pace, requiring plenty of throttle and revs even with just one or two onboard.

It’s the same story with rolling acceleration, not helped by the archaic four-speed auto that is easily flustered. The result, as you would expect, is constantly mashing the accelerator to wring the s*** out of the engine in order to make progress. 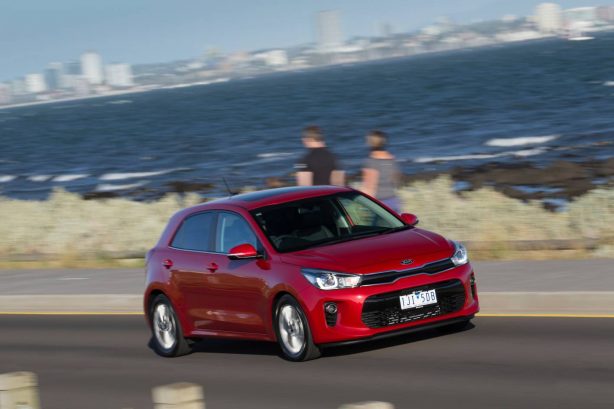 Switching to manual mode will give you a little more control, although the same principle still applies.

It’s frustrating because once up to speed, the Rio is decently comfortable. At around town speeds, the new Rio is quieter than the outgoing model. It’s steering is light and precise, making it easy to point the car on busy city streets and tight car parks. Parking manoeuvres a breeze, too, thanks to its rear-view camera with dynamic guidelines and rear parking sensors.

Its locally tuned suspension provides the Rio with better responsiveness compared to the outgoing model, while still tackling city duties with ease.

The 2017 Kia Rio is solidly put together. The panels are all properly aligned and there are no annoying creaks or rattles from anywhere in the car.

On top of that, Kia is still the only manufacturer in Australia with a 7-year, unlimited kilometre new car warranty for added peace of mind.

All that throttle mashing means fuel economy takes a dive. Our test average with mixed driving comes in at around 8.2L/100km, around 2L/100km more than Kia’s official figure.

Spend a little more time in the city and you can expect this average to climb even further. Not great for a small car. 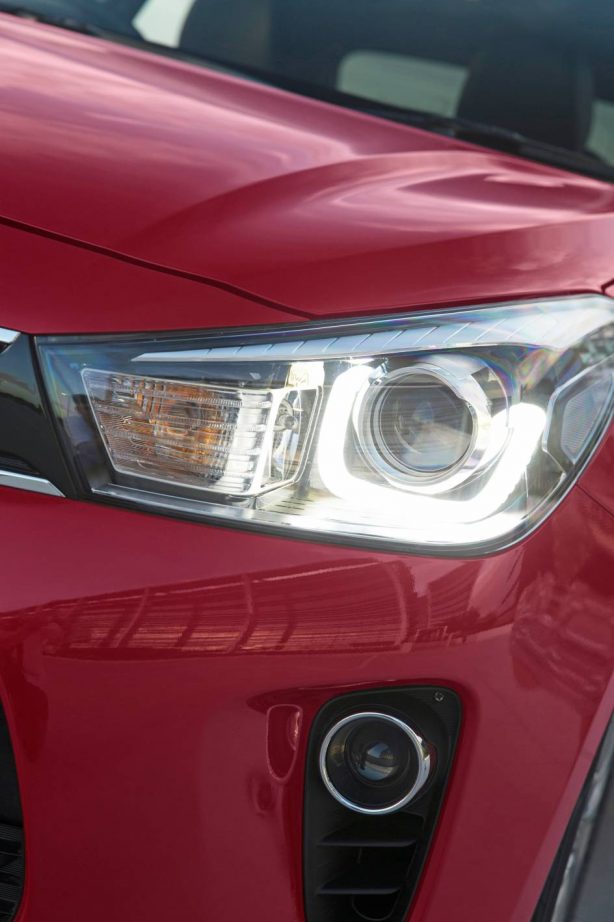 The Kia Rio’s evolution from its first-generation no-frills forebear is no doubt an impressive one, but sadly, Kia seems to have dropped the ball with the fourth-generation Rio.

While the new design is undeniably more premium and European, it is also blander than the old car. What disappoints most is the car’s power and drivetrain, which lacks grunt, polish and is also rather thirsty.

It’s a shame, as the Rio is comfortable and handles relatively well both in the city and on open roads. It also has a decent amount of space for everyone and the new interior is a big step up from the outgoing model.