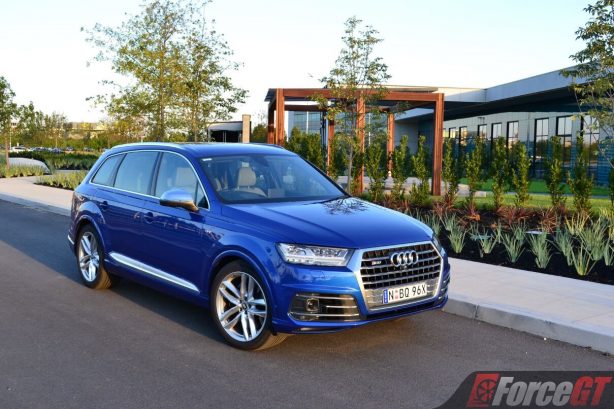 Do we need a 320kW / 900Nm seven-seat family SUV? Probably not. Do we want one? Yes, please. Like supercars, fast crossovers don’t need to make sense. They sell on performance figures, and nevermind if they are never explored by their owners, ever. And car makers make them because, well, they can.

Meet the 2017 Audi SQ7, Ingolstadt’s first crack at pumping up its biggest SUV and the latest to join the swarms of hi-po crossovers – Porsche Cayenne, Range Rover SVR, BMW X5 M, Mercedes-AMG GLS 63, to name a few – at a high price of $153,616 plus on-road costs.

The Audi, though, has one main point of difference. It’s a diesel, but not as you know it. Displacing 4.0 litres through eight cylinders, the engine’s two variable-vane exhaust turbochargers sit inside the V8’s 90-degree vee, and operate in series to produce a maximum of 2.4 bar boost. They are supported by an electric compressor that acts like a supercharger to drive the turbochargers at low revs when exhaust gas pressure is insufficient. The compressor wheel can spin up to 75,000rpm in less than a quarter of a second, essentially eliminating turbo lag.

To feed the electrically-powered supercharger with enough energy (up to 7kW is required) to spin up so quickly, a world-first 48-volt electrical architecture is used and runs in parallel with the standard 12-volt system that powers the usual ancillaries. A compact lithium-ion battery can store up to 0.5 kWh and can deliver up to 13 kW of power to the electric compressor. 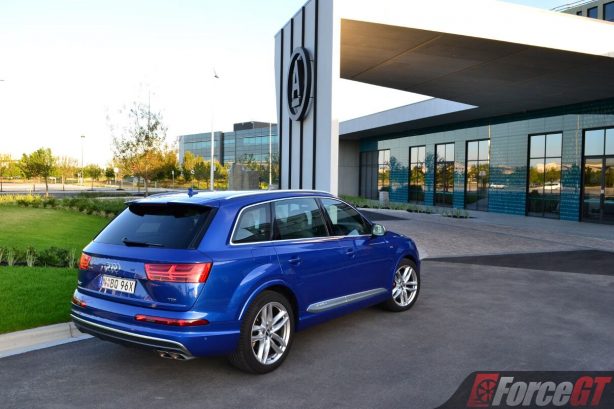 The result is a gigantum 900Nm of torque available from a sleepy 1,000rpm through to 3,250rpm. As synthetic as it feels, it’s the most un-diesel like diesel engine we have come across, with power delivery akin to a normally aspirated engine and throttle response comparable to an electric powertrain. It pulls hard right from the get go and all the way to the 5,000rpm cut off, with virtually no dead spot in the rev range.

Its hesitation-free accelerator input and enthusiasm to rev are further affirmed by our tested 0 to 100km/h time of just 4.9 seconds. Yup. This is a two-tonne SUV that can give many sports cars a very hard time on a drag strip. 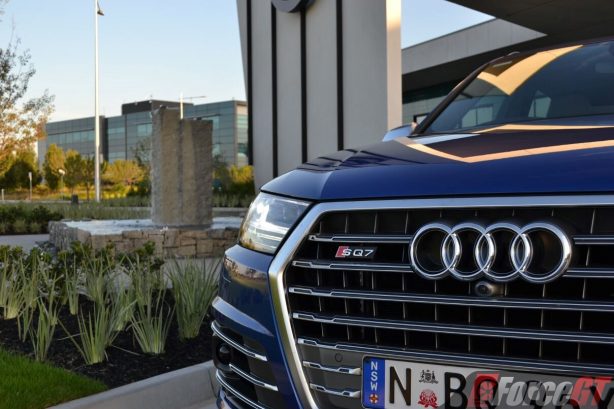 And it’s not just the way this thing punches through the speedometer that impresses, the noise it makes at full swing is also nothing short of dramatic. Like the way it revs, the soundtrack gives away little if not nothing at all that it is a diesel. There’s none of those clatter and swooshy induction rush you normally hear from a highly boosted diesel unit. Instead, inside and out, it sounds pretty much just like an atmospheric petrol V8 – smooth, rich and meaty.

The eight-speed torque converter automatic matches well with the engine and just as refined, with the only annoyance being the occasional hesitation to downshift when say, coming out of a roundabout or intersection. When it eventually does you would have buried half your foot in the throttle and the resulting in rush of torque can catch you off guard. Happily, Sport mode fixes this adding snappy gear changes along the way appropriate for some enthusiastic driving. 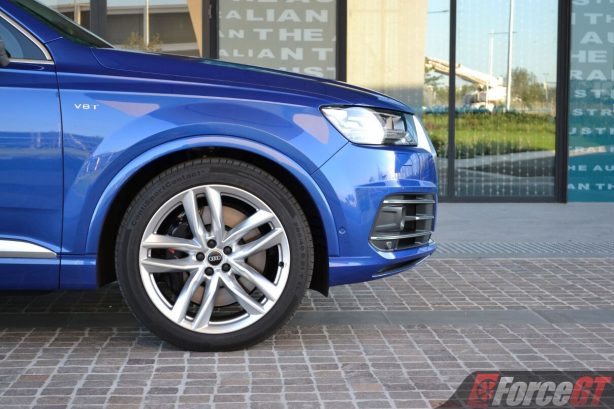 The 48v system that drives the supercharger also powers the SQ7’s electromechanical stabilisation system. In the simplest terms, the front and rear anti-roll bars are twisted against each other by two electric motors during sporty driving to ensure tight body control, whereas they are decoupled while cruising over bumpy roads for maximum ride comfort. This active roll stabilisation system is part of the optional $13,500 Dynamic Package, which also includes an all-wheel steering system and the quattro self-locking centre differential on the rear axle.

Our test car came equipped with all three systems. Working with the standard air suspension and adaptive dampers, the setup endows the large Audi with superb grip and sure-footedness around the bends. It’s no sports car like and its heft is still a constant companion, but there’s very little body roll and change of direction is as neat and swift as you can get in a high riding SUV. Its steering, though distant in feedback, gives added confidence through its precision and proper weightage. The brakes – six calipers in the front and four in the back – are strong but feels a little too sticky, especially in heavy traffic, requiring some finesse to execute smooth braking.

In the softest damper setting, the ride is plush but still a tad firmer than a regular Q7 on rougher surfaces, sniffing out more of the road for better driver engagement. There’s also very little road and wind noise in the cabin. 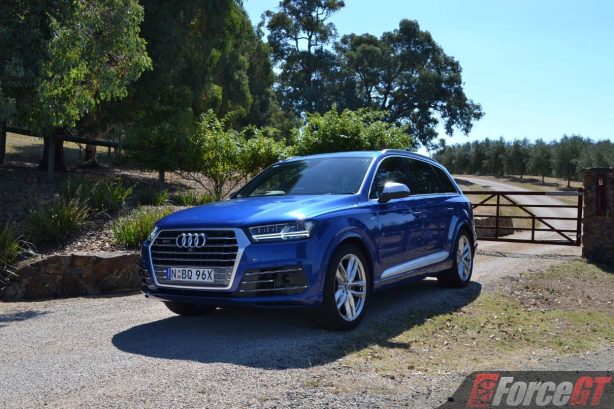 Visually, only minor changes distinguish the SQ7 from its lesser variants. The disappointingly restrained S tweaks include a slightly larger lower front bumper intake, bolder wheel arch extensions, bespoke 20-inch wheels, quad-tip exhaust and splashes of aluminium exterior trim. It still needs larger 21-inch wheels (fitted to our tester) to look good, and for those who are truly obsessed, there are also 22s.

Like the standard Q7, the SQ7’s interior is a very nice place to be in. It’s easily the benchmark of the segment with its classy and premium ambience. There’s a generous application of brushed aluminium trim around cabin, complemented with high gloss grey trim pieces. There’s no shortage of startling elements too, such as the climate control display, which at first looks ordinary until the icons animate when you touch the buttons. Yes, it’s actually a full LCD.

At night cabin ambience is lifted by the ambient lighting, which is composed of thin light tubes and LED light strips embedded around the cabin. While those of its rivals are customisable between just three or four colours, the ones in the SQ7 offer a full colour palette with 30 shades. And boy do they look cool at night. 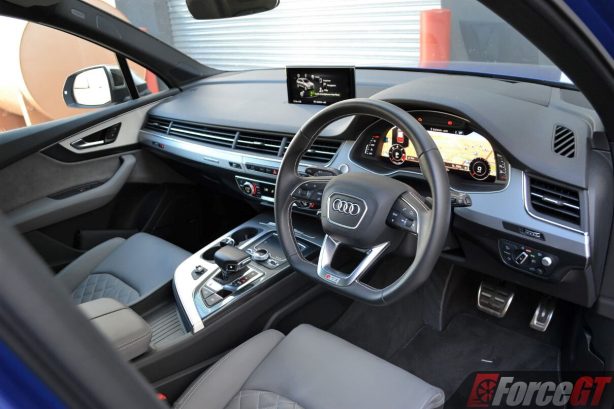 Also standard is the Audi MMI Navigation plus with MMI touch which incorporates haptic feedback to enhance user interaction with the menu system. All driving information is now dispensed through the ultra-crisp virtual cockpit LCD instrument cluster, which replaces conventional gauges. A retractable 8.3-inch centre screen is also fitted as standard.

The all-new Audi SQ7 will appeal to buyers who want a practically uncompromised SUV that is effortless to drive every day in the week yet dynamically competent and fast enough for a sneaky weekend blast through the hills. Its styling might be a bit mundane but from another perspective it looks classier and better mannered if that’s your preference. Being a diesel it’s also relatively more economical to run than its petrol-powered rivals.