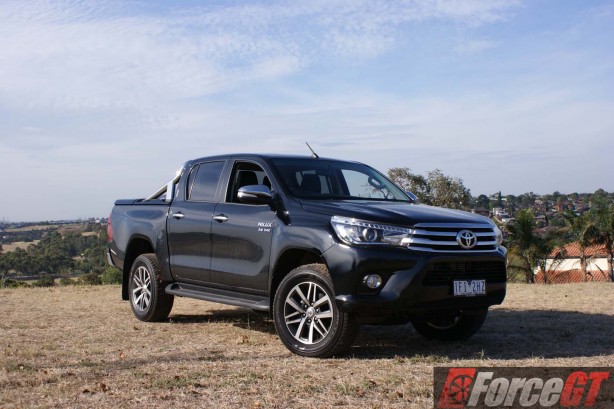 The Toyota HiLux year after year tops the sales charts and it’s not hard to see why; with its style and practicality you can use it as a tough work truck, a family mover or as an enthusiast vehicle.

The HiLux range is extensive; up to 31 different cab combinations are available which is up from 23 in the previous generation. The model we tested came configured as a SR5 pick-up, it’s Toyota’s flagship ute featuring a dual-cab interior and hard tonneau tub.

Starting at $53,990 this tough ute gets you a 2.8-litre turbo diesel engine paired with a 6-speed manual gearbox, heavy duty suspension, auto-leveling headlights and a rear locking differential as standard. 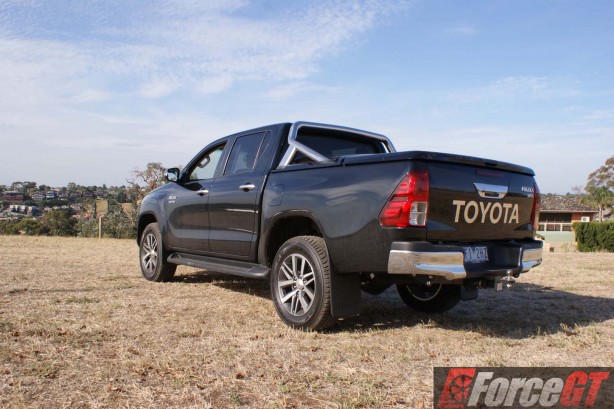 Underneath the skin, Toyota have completely redesigned the chassis, making it significantly more rigid than previous generations. The increase in structural rigidity allows the new HiLux to reach the benchmark 3.5 tonne towing capacity that other manufacturers gloated about for years. Unfortunately, only the manual diesels can reach this capacity, units fitted with auto transmissions are only rated to 3.2-tonne.

Toyota have stuck with a leaf spring suspension kit instead of moving to a coil based setup. While the setup is similar to previous generations, Toyota have revised the mounting points which have significantly improved ride quality.

The incredibly light power steering pump makes for easy maneuvering at all speeds, and is almost comparable to electric power steering systems being adopted by competitors. 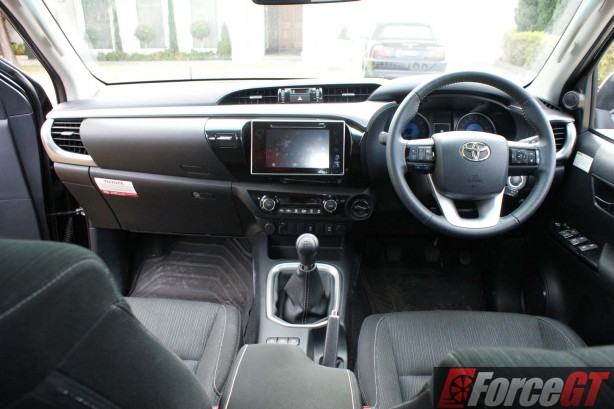 The interior comes in a combination of hard/rugged, easy to clean plastics and cloth trimmings. Dash buttons and dials also come strengthened giving full confidence that they will survive in the long run.

Standard with this generation is the inclusion of a floating 7″ infotainment unit (6.1″ on lower end models), which on the SR5 also includes built in satellite navigation and digital radio. While the system is feature rich, there are significant performance issues regarding button input. All touch buttons appear to have a 1-2 second delay making it extremely painful to input addresses for navigation. A reversing camera is also included on all models and is a god send for parking the behemoth.

Seats on the SR5 come with premium cloth with an additional SR5-only leather package available. The seats are very comfortable for potentially lengthy trips between work sites.

Cabin space has been improved from previous models. The front is very roomy and comfortable, but the same can’t be said about rear; the lack of legroom will have your crew fighting over the front seat. 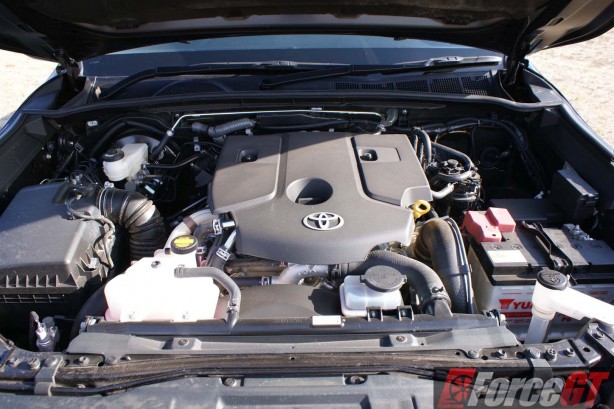 4 different engines are available across the HiLux range, the SR5 however can only be ordered as a 2.8 or 4-litre variants.

Our SR5 was optioned with a 2.8-litre turbo diesel and paired to a 6-speed manual transmission.

The new HiLux isn’t as quick as others in the same class, engine capacities were reduced in order to bring the combined ADR efficiency score down to a more competitive 8.5L/100km. In testing, we struggled to achieve the ADR score; combined highway and city driving we managed a 10.3L/100km which for the 80-litre tank would net us between 700-800km in range. 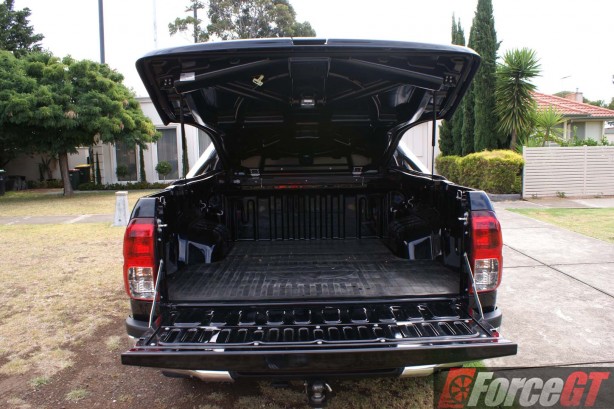 The SR5 comes rated with a 925kg payload capacity; this is lower than competitors like the Amarok or BT-50 who are offering over 1 tonne.

The tub measures in at 1,645mm long and 1,569mm wide however the protruding wheel arches reduce the usable space to about 1,100mm, which will restrict certain pallets from being carried.

Surprising to us was the short servicing intervals. Toyota prescribe a 10,000km or 6-month servicing interval while most competitors offer servicing in 12 month or 15,000 km. Servicing is a bit cheaper however with $180 fixed cap servicing for the first 6 visits. Warranty comes in at 3-year/100,000 km which is also shorter than similar vehicles.

Overall the HiLux is a great all round pickup, it’s a good mix between comfort and practicality. It’s unfortunate the back seats are so tight, long trips could be an issue for passengers and the suspension could be better but otherwise a great vehicle.