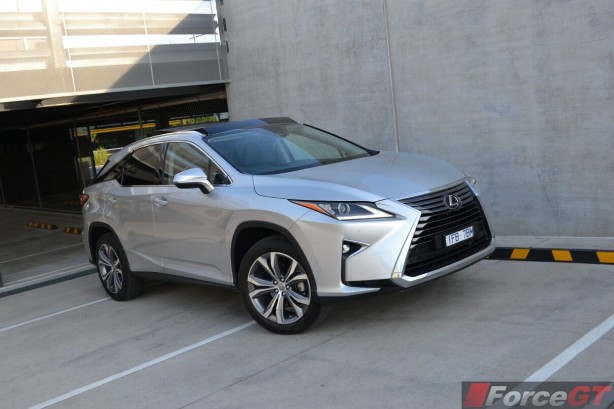 Lexus essentially pioneered the luxury SUV segment with the launch of the original RX in 1998. It was such a hit, especially in North America, that it inspired similar competitors from rival marques.

Today, the crossover is Lexus’ best-selling model in the brand’s 26-year history. With global sales of more than 2.1 million units, the RX represents three out of ten vehicles ever sold by Lexus.

However, the last generation RX was allowed to dwindle, with uninspiring designs and outdated drivetrains. And its European rivals were quick to close in for a chunk of the pie.

Fortunately, Lexus striked back with an all-new model. Redesigned completely from the ground up, the fourth-generation RX boasts a fresh, new, chiselled body style with new dose of Lexus L’Finesse.

According to Lexus, the Australian line-up is the most comprehensive of any Lexus market in the world, with all variants available in varying grade levels. Prices have also increased compared to the previous model, with the fully loaded RX 450h Sports Luxury now stretches out to $106,000.

With the new RX, Lexus says their aim has been to make a bold and completely new statement in the segment while building on and staying true to the pioneering values of previous RX generations.

We are glad to say that Lexus have succeeded. Longer, wider and lower than before, the new RX looks like no other SUV on the road, not because it’s ugly but because it’s super cool. The exterior has no shortage of creases, edges, bold lines and startling elements. The headlights are sharp, complemented by those equally pointy fog lights surround. When viewed directly from the front, all lines point toward the spindle grille, which is the largest we have ever seen in a Lexus.

A truly distinctive styling cue on the new RX is the blacked-out C-pillars, which provide the illusion of a “floating roofline”. We were never a fan of such design but it works brilliantly on the RX, making the SUV sleeker and less “boxy”. 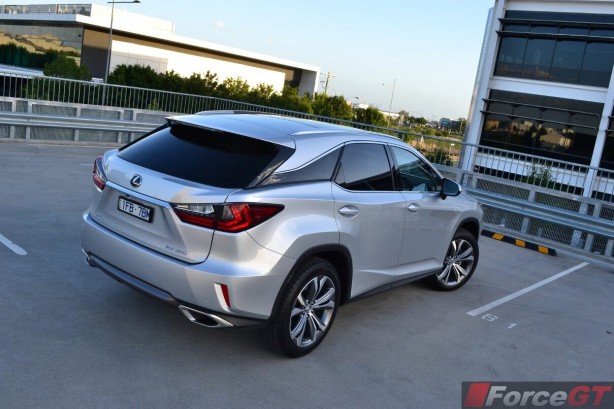 The rear is equally dramatic, with lines cutting through the rear hatch echoing the outline of the spindle grille at the front. The concealed rear windscreen wiper is also a neat touch. But our favourite is how the shoulder lines flow so seamlessly above the taillights onto the slightly raised rear deck.

Like the smaller NX, Lexus’ daring and unconventional approach to design has again worked on the RX, resulting in what we think is the sportiest and freshest looking SUV in the segment.

In sharp contrast, it’s a rather different story inside. The conservatively-styled dashboard is almost an insult to the exuberant exterior. The air con vents in the centre console are far from classy and there’s desperate need to bring the infotainment graphics (in Luxury grade) into 21st century. 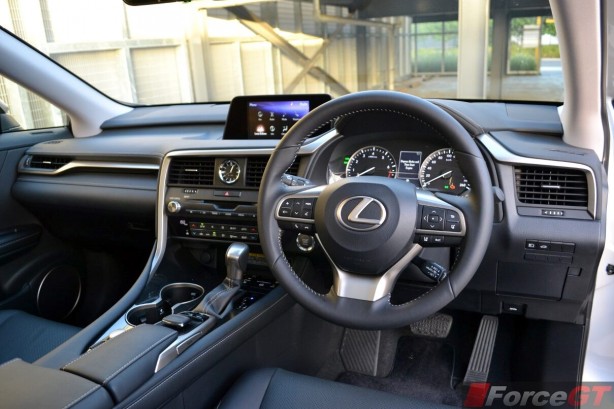 Gladly, the seats are beautifully crafted and sumptuously comfortable. The driving position is excellent, so is all round visibility. There’s also more interior space thanks to the 50mm longer wheelbase and 10mm wider front and rear track.

Elsewhere, clever storage compartments furnish the cabin, including a new type of cup holder that adjusts to the height of the cup you place inside it. Boot space has grown from 469 to 553 litres (seats up), expandable to 1626 litres (seats folded).

The range-opening RX 200t is the second Lexus SUV to utilise the company’s 2.0-litre turbocharged four cylinder petrol engine since its debut on the NX 200t. It develops 175kW and 350Nm – a substantial 38kW increase in power and a full 100Nm more torque than the naturally aspirated four cylinder engine it replaces in the RX 270. The engine drives the front wheels via a six-speed automatic transmission.

We sampled the mid range RX 350 which features an upgraded 3.5-litre direct injection V6 that develops 221kW and 370Nm – 15kW and 24Nm more than the previous generation – and drives all four wheels via an eight-speed automatic transmission.

The powertrain is superbly refined with not a hint of vibration in its operation. It offers linear and responsive power delivery across the rev range, thanks in part to the smooth shifting and precise eight-speeder. Typical of a Lexus, this engine is so quiet it’s almost inaudible under normal cruising. 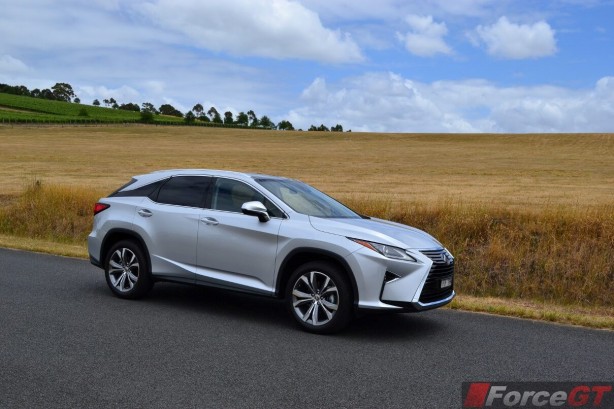 We also spent time in the RX 450h hybrid, which features a 3.5-litre Atkinson cycle V6 petrol engine combined with two electric motors to produce 230kW and 335Nm of total system power – a 10kW increase over the previous generation – and drives all four wheels via a continuously variable transmission.

Despite the larger footprint, the new RX feels more agile and composed to drive thanks to its brilliant chassis, which has been significantly strengthened. Revised suspension damping and larger anti-roll bars mean the crossover now corners with improved grip levels and controllability.

The electric steering system has also been significantly revised and what a great effort. It’s direct and precise with good feedback.

For a non-sport oriented SUV, the RX’s handling is remarkably tidy and neutral, though you are still always aware of its heft.

Out on the open road, the RX’s quietness and serenity is just sublime. Wind noise is almost non-existent while road noise is very well suppressed. Equally impressive is the smooth ride around town, despite rolling on 20-inch wheels. 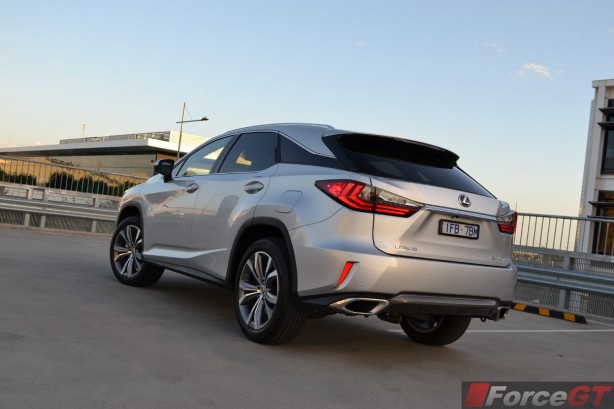 Typical of a Lexus, the RX feels impeccably built inside and out. The doors are well aligned and shut with a reassuring thud. The interior is superbly finished with excellent fitment and high quality materials on most surfaces.

However, we have seen better looking analogue clock in other Lexus models and the digital displays for the dual zone climate control in the lower centre console look like they come straight from a calculator.

Mechanically, Toyota engineering underneath means the RX will be reliable and relatively trouble-free to own.

The RX 350 we tested is inherently less efficient compared to forced-inducted powertrains offered by other competitors. It also misses out on auto stop/start, a feature only available in the RX 200t, which on paper sips 8.1L/100km.

Our week spent with the thirstiest model in the range saw the trip computer returning an average of 11.4L/100km with equal split of urban and freeway driving. The figure hovered around 7.0L/100km when cruising on the freeway. 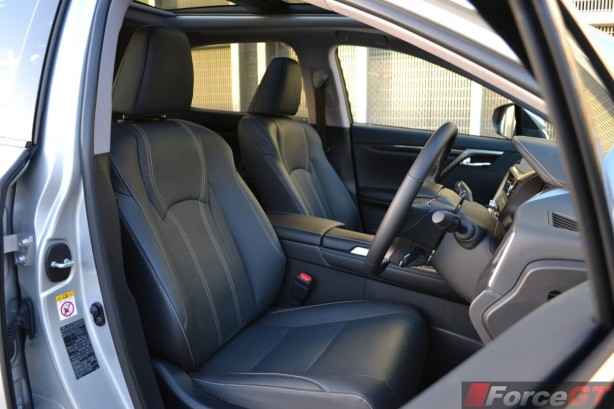 The range-topping Sports Luxury adds Adaptive High Beam System, which partially dip the high beams to avoid dazzling on coming vehicles. It will also automatically adjust the distance of the projected beam according to the distance to the vehicle in front. It’s an excellent system that works well on country roads.

Inside, all RX models have power-operated leather-accented seats with memory, at least 12 speakers in the audio system, keyless entry and start, inbuilt ionizer and air freshener, third-generation Lexus Remote Touch and wireless charger.

When it comes to a best seller, car makers usually play it safe. Not for Lexus with the new RX. And we are glad they took the risk, because the sharp-looking fourth-generation RX will definitely resonate with younger buyers, while losing none of the attributes that made it such a widely accepted family SUV.

Although we would like to see more innovation around the cabin, the new RX is an improvement across all fronts. It’s generously equipped, comfortable and drives remarkably well. Top that with more space from the larger dimensions, the RX has finally progressed and is now a genuine contender against the formidable German offerings.