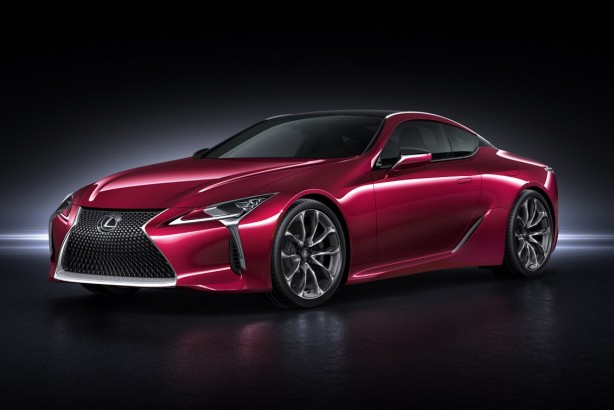 Set for a global launch in 2017, including Australia, the luxury four-seater is being hailed by Lexus as the strongest ever statement of its brand direction.

Although exact timing of arrival is yet to be confirmed, Lexus Australia chief executive Peter McGregor said he was delighted the local subsidiary’s appeal to Lexus International to secure the vehicle for Australia had been successful. 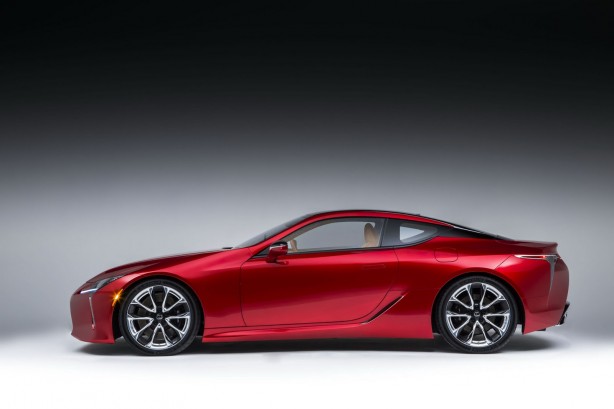 “The LC 500 epitomises the new spirit of Lexus and will act as a lighthouse model for our expanding range,” Mr McGregor said

Inspired by the equally impressive LF-LC concept at the Detroit Motor Show in 2012, the production model is underpinned by the company’s new Global Architecture Luxury (GA-L) platform, said to be the most torsionally rigid ever produced by the company. The new GA-L platform will also serve as a blueprint for all future front engine, rear drive models from Lexus.

Lexus’ Chief Branding Officer and Master Driver, Akio Toyoda, has been integral in the development of the production model since it was first shown as the LF-LC concept at the Detroit Motor Show in 2012.

“The LC 500 has been an important product for Lexus and me personally,” Mr Toyoda said.

“A few years ago we decided to guide the future of the brand with products that had more passion and distinction in the luxury market. This flagship luxury coupe’s proportions, stunning design and performance make a strong statement about our brands’ emotional direction, and will grow the Lexus luxury appeal globally.” 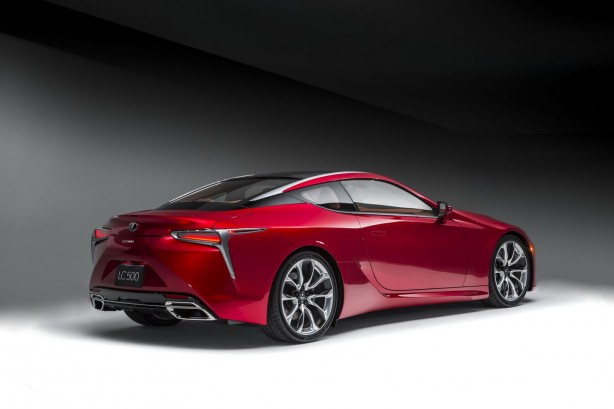 The Lexus engineering and design team has successfully transfer most of the LF-LC’s design theme into the new LC 500, with the production model sharing many of the key design elements, proportions and visual dynamism of the concept that inspired it. 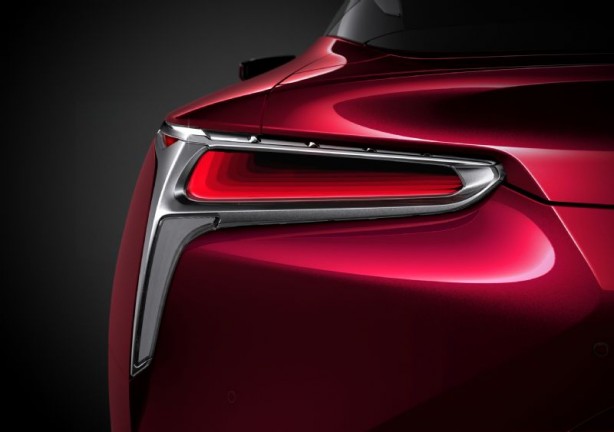 The “L”-shaped daytime running lights rest below a new triple LED headlamp unit specially designed to include one of the industry’s thinnest projectors to enable a low bonnet with a short front overhang.

The car’s athletic profile is characterised by its fast, sloped roofline, its wind-cutting silhouette, a long 2870mm wheelbase with compact front 920mm and rear 970mm overhangs and low bonnet height. 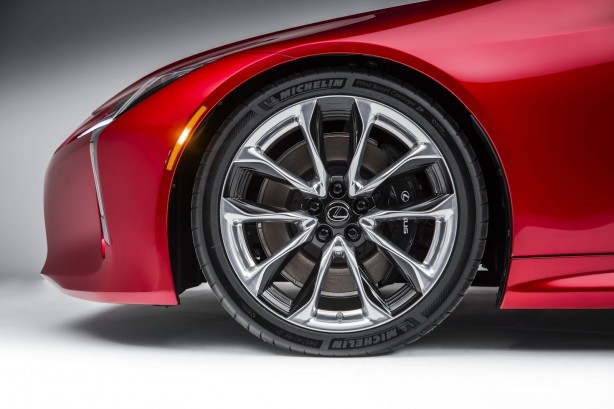 The curves and flowing lines maintain a consistent tension in sheet metal through to the rear end that features slimly designed, multi-layered tail lamps with a unique lighting effect that helps convey a sequential L motif. 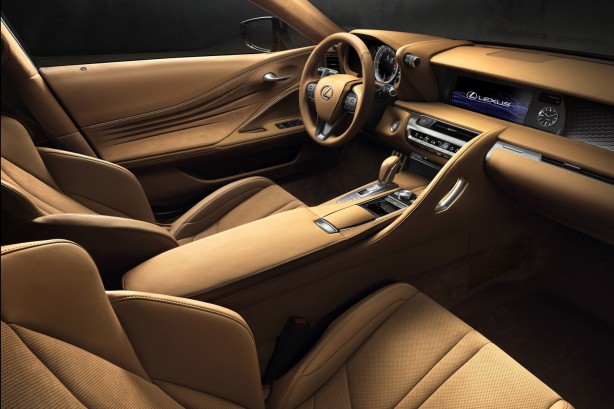 Inside, the interior design of the LC 500 is influenced by the dynamic luxury theme of the exterior with a cockpit-focused and elegant layout. 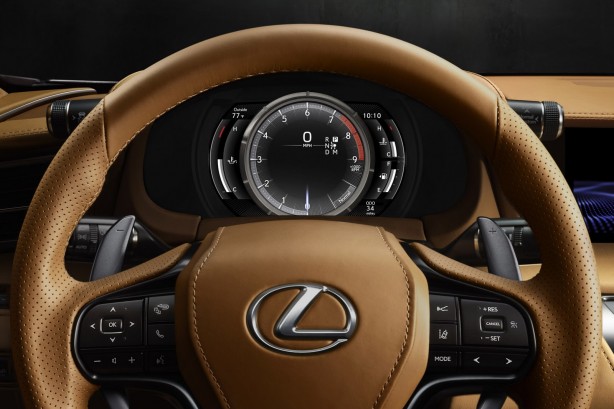 “At an early stage, the designers collaborated with the engineers to understand their image for the LC 500’s driving dynamics, and they incorporated this into the design,” said Tadao Mori, chief designer of the LC 500.

“For example, we gave serious consideration to where the driver’s eyes would focus, and designed the surface shape in that area to help support a driver’s mindset.

“This project was one of the first time that designers were closely involved in the dynamic engineering development so we could understand the driving goals and support with the car’s design.” 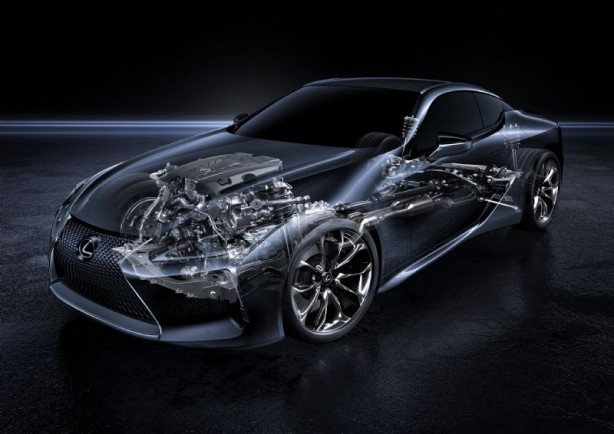 Power for the LC 500 comes from Lexus’s proven, high-revving 5.0-litre V8 that also motivates the RC F and GS F.

The naturally aspirated V8 was selected for its smooth, linear throttle response and emotional engine sound.

The new engine is built for durability with lightweight, high-strength forged connecting rods and titanium valves that allow the engine to flourish at high rpm.

A newly developed 10-speed automatic transmission – the first ever in a luxury automobile – with shift times rivalling those of a dual-clutch transmission helps transfer power to the rear wheels.

The component is smaller and lighter than some current eight-speed transmissions.

The wide bandwidth of shifting afforded by 10 closely spaced gears is said to be ideal for all forms of driving, providing an optimal gear in all conditions. 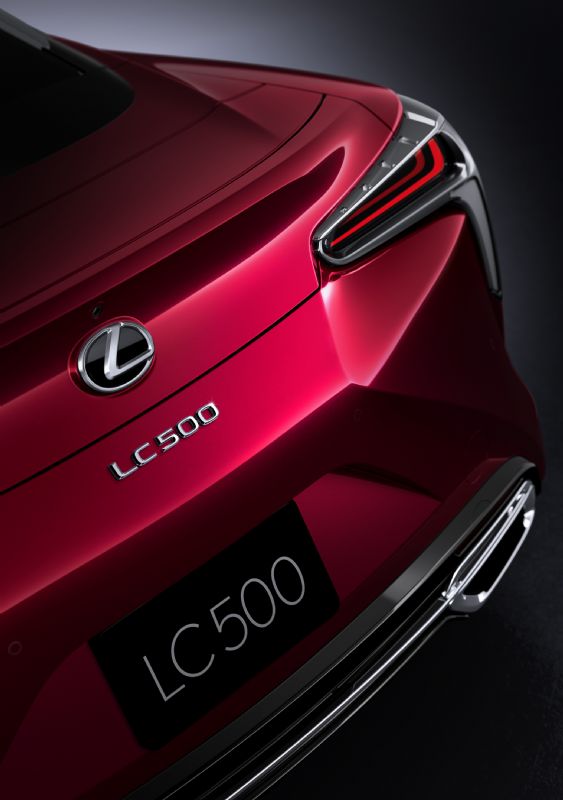 This transmission is matched to a new electric control system with software that helps anticipate the driver’s inputs by monitoring acceleration, braking and lateral g forces.

As part of a multi-faceted approach to active safety, the Lexus Safety System + package combines millimetre-wave radar with a camera to achieve high reliability and performance.