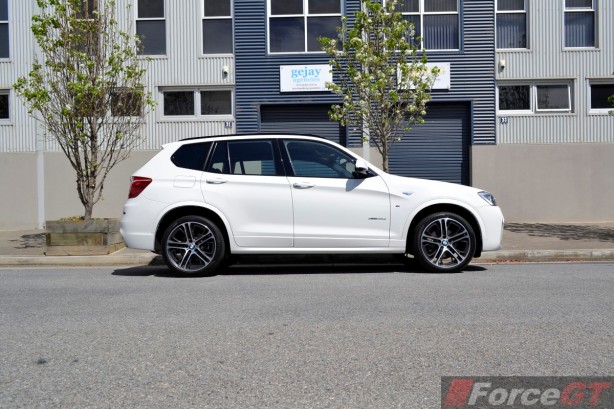 In 2003 niche-filling maestro, BMW, launched its segment first X3 that started a host of new premium mid-sized SUVs such as the Audi Q5, Volvo XC60, and more recently, the Lexus NX.

More than ten years on and with over a million global sales under its belt, the facelifted (LCI in BMW-speak. It stands for Life Cycle Improvement) second-generation 2014 BMW X3 arrived earlier this year with refreshed styling and a revised equipment list to see off those pesky competitors.

Available in four models, the range kicks off with a pair of 2.0-litre turbocharge four-cylinder petrol engine models priced from $60,765 for the xDrive20i, and $72,930 for the xDrive28i.

We recently drove the two models that book end the range to find out if the middle child of BMW’s X Series is as accomplished as its bigger brother, the X5. 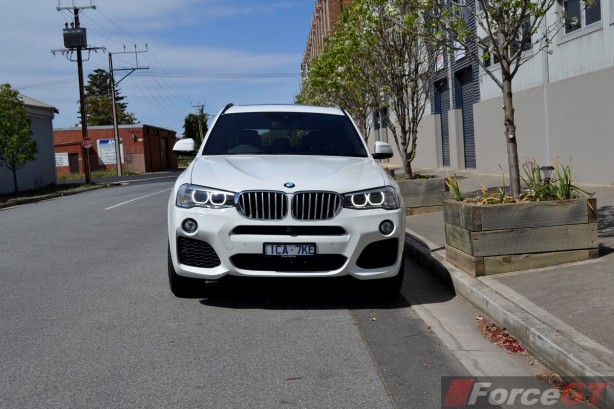 The 2014 BMW X3 has been refreshed with a bolder and more contemporary interpretation of Bee M’s iconic kidney grille. Like an amoeba, it stretches out at the top corners of the grille to meet the newly design headlights.

Both front and rear bumpers have also been redesigned with updated contour lines and features, while the LED side indicators are now housed in the new exterior mirrors. 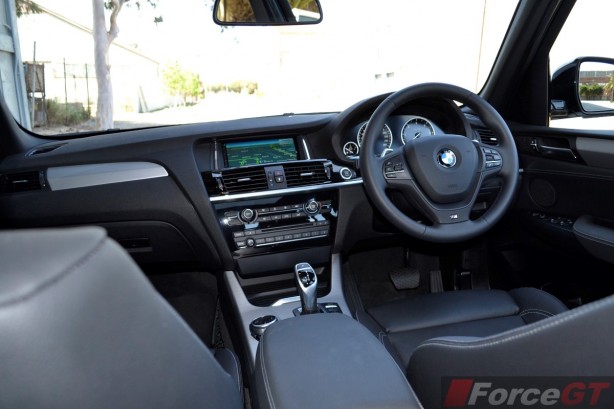 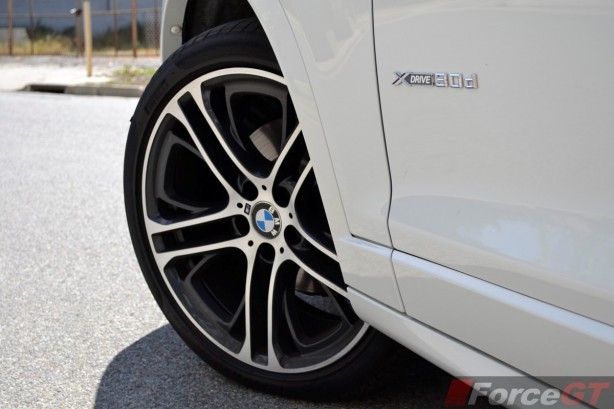 Less obvious are the stainless steel finisher protecting the luggage compartment entry sill and the model designation on the doorsills.

The overall effect is one that is modern yet unmistakably BMW. Our butch M Sport kit equipped xDrive30d is particularly striking, looking like a mini X5 M50d that we tested earlier this year.

Inside, the interior has been revitalised and now boasts high-gloss black panels for the automatic climate control system, new cup holders in the centre console with sliding cover and four new interior trims, including three new wood trim options with pearl-effect chrome highlights.

The super comfortable seats now have three new leather upholstery colours to choose from – black, mocha and ivory – and features specific stitching and ‘X’ embossment on the front seat headrests in the xDrive28i and xDrive30d. 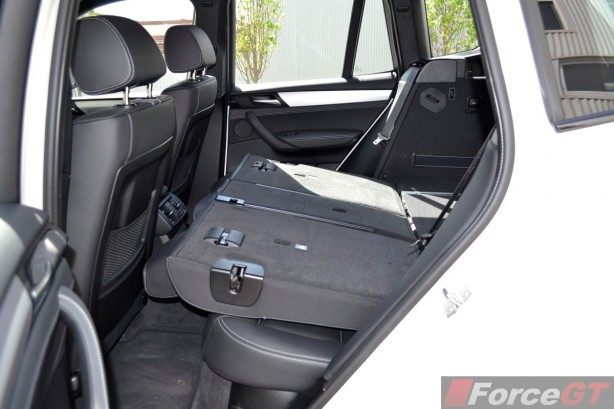 At 4,650mm long and a wheelbase of 2,810mm, the X3 isn’t exactly small. In fact, it is just 236mm and 123mm shorter than the X5, respectively. The updated interior boasts extra storage and behind the electric tailgate is 550-litre of luggage space – not class-leading but decently sized. 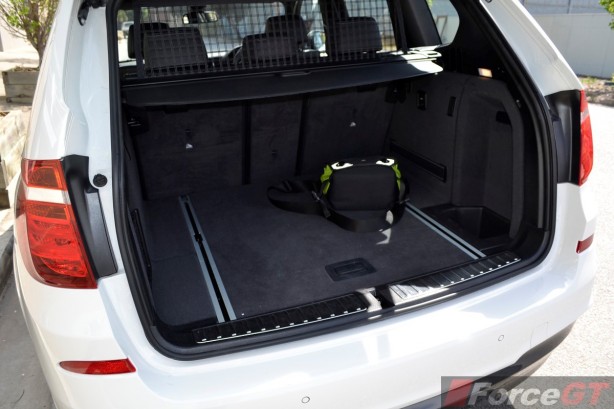 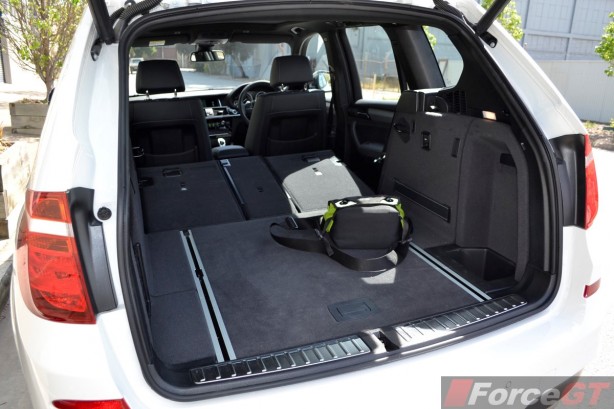 A 40/20/40 split-folding rear seat is now standard and will expand the boot volume to 1,600 litres when tumbled. There are two rails that run along the outer edge of the luggage floor that comes with four removable and adjustable cargo hooks for the cargo net. Alternatively, they can just be used to tie-down loose items in the boot.
Like all high-riding SUVs, the driver and front passenger gets a commanding view of the road ahead, perched on ultra-supportive and comfortable leather sports seats (part of the M Sport Package).

Mums and dads will also be pleased to know that all round visibility is a strong point in the X3. This is further enhanced with standard rear view camera (360 degree surround view on the xDrive28i and xDrive30d). 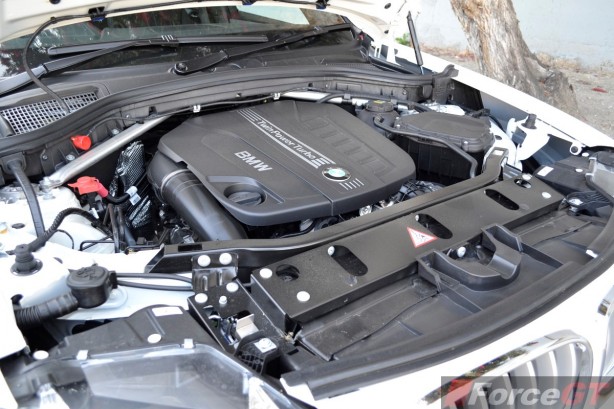 The petrol unit in the X3 is a familiar powerplant that also powers BMW’s passenger vehicle range.

There is little that separates their fuel consumptions, with the xDrive20i claiming a combined average of 7.2L/100km while the xDrive28i sipping just 0.1L/100km more. That’s despite the xDrive28i taking a hot hatch-beating 6.5 seconds to reach triple digits from a standstill – 1.7 seconds quicker than the base model.

On test, covering over 500kms of both city and freeway driving, the xDrive20i managed to average only 11.3L/100km. For a better balance between performance and economy, the xDrive28i is the pick of the petrol-powered X3 models.

On the other hand, the xDrive30d is propelled by the sole inline 6-cylinder engine in the range displacing 3.0-litre. It produces 190kW @ 4,000rpm and a muscular 560Nm at 1,500-3,000rpm. It is one of the most un-diesel sounding diesels we have come across, with a deep baritone just off idle that gradually transitions into an angry roar as the rpm needle sweeps across its arc before reaching the 5,400rpm redline.

As expected, their fuel consumption is significantly lower than their petrol counterparts, with the xDrive20d claiming just 5.2L/100km and the range-topping xDrive30d slurping 5.9L/100km of diesel fuel. 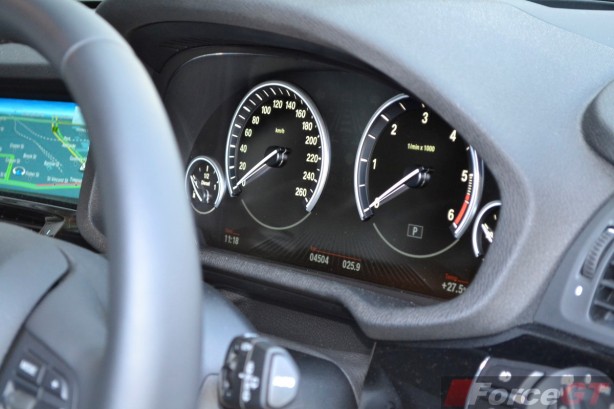 However, on test with roughly 70/30 urban to freeway split, plus with ECO PRO engaged 60 per cent of the time, the trip computer on the xDrive30d returned a 9.3L/100km reading – not fantastic but also quite reasonable for the performance.

The xDrive30d requires a mere 5.8 seconds (tested) to hit 100km/h from rest, while the xDrive20d a claimed 8.1 seconds. The 30d’s pulling power is so strong that you are pinned back to you seat the moment you floor the throttle.

All four engines are connected to a smooth shifting ZF 8-speed automatic with flappy paddles. It works particularly well with the relatively narrow power band of the diesel in all driving modes.

To maximise efficiency, every X3 is equipped with standard auto start/stop that shuts down the engine when the vehicle comes to a temporary stop. The system is quick to fire up the moment the brake pedal is released for a smooth takeoff. 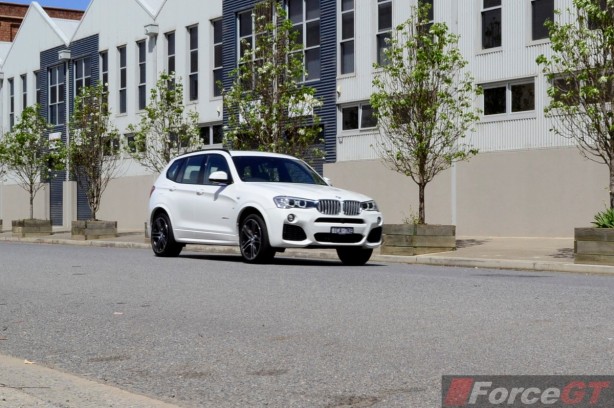 The X3 is supremely quiet and comfortable around town, even with the optional 20-inch M light-alloy wheels shod with 245/45 front and 275/35 rear run flat tyres in our xDrive30d.

Another party trick up its sleeve is the variable-ratio sports steering (also standard on the xDrive28i), which quickens the steering for enthusiastic driving as well as parking. It means fewer turns lock to lock, helping shrink the heavy SUV around its driver and endowing it with a nimble feel. It’s a $600 option on the other two models but we highly recommend it.

While the X3 handles relatively well for a heavy high-riding wagon, it lacks the composure and confidence inspiring poise that makes the even bigger and heavier X5 one of the best in class in terms of handling.

Even with the sport suspension dialed up to Sport+, the 30d can’t disguise its nose heavy tendency and pushes wide in corners. While there is plenty of grip from the chunky rubber, there is too much body roll for our liking.

Despite those shortcomings, the X3 is still one of the more involving and agile SUVs around corners.

Offroad, the X3’s all-wheel-drive system maintains good traction on most gravel and sand tracks, only submitting to the trickiest and overly slippery surfaces. Coupled with the strong low down torque of BMW’s current crop of engines, the X3 is surprisingly not afraid to get dirty. 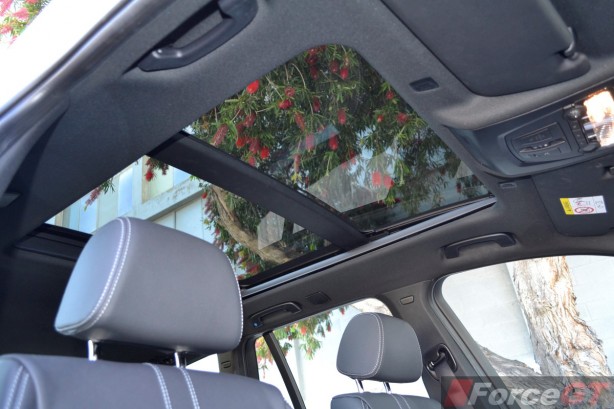 The standard specification of the 2014 BMW X3 has received special attention with substantial increases across the range.

For both the xDrive20i and xDrive20d, this has resulted in bi-xenon headlights, gearshift paddles, extended smartphone connectivity including audio streaming (which is patchy and doesn’t work very well), freshly styled 18-inch wheels and the lights package now included as standard. 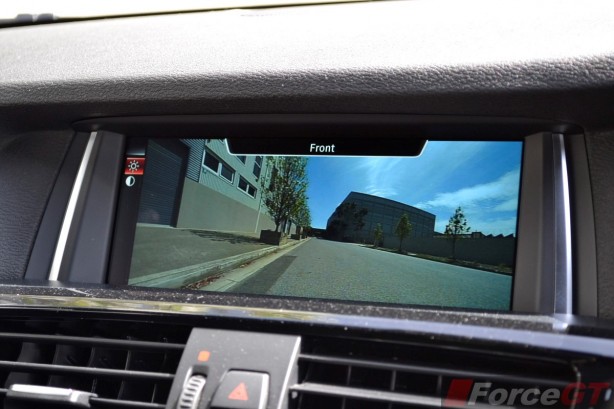 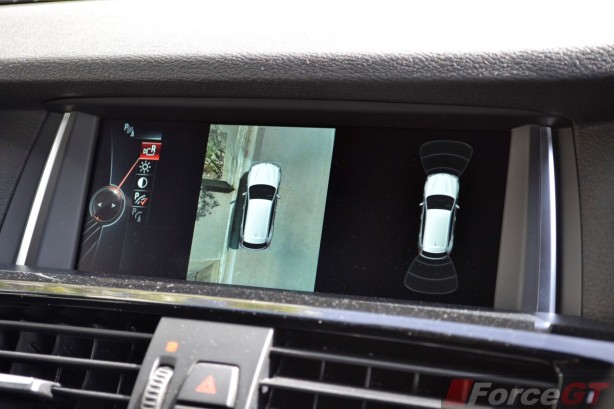 The new X3 is also the first BMW in Australia to come with ConnectedDrive as standard across the range. The car comes with its own permanent SIM card that enables several emergency functions, such as initiating breakdown calls to roadside assistance. In the event of an accident, Intelligent Emergency Call can call the BMW call centre and emergency services and relay the car’s location.

What we like most though, is the optional $1,200 ConnectedDrive Freedom package fitted to the test cars. It brings Real Time Traffic information, handy in avoiding heavily congested routes in peak hour.

It is one of many, many options available on the X3. In fact, the option list is 4 pages long!

Regardless of which X3 model you choose, you will be driving one of the best SUVs in its class. No, it isn’t as accomplished as the X5, but it is just as practical and comfortable.

The xDrive30d is our pick for its blend of comfort and performance – a family taxi that doubles as a hot hatch for dad on the weekend!