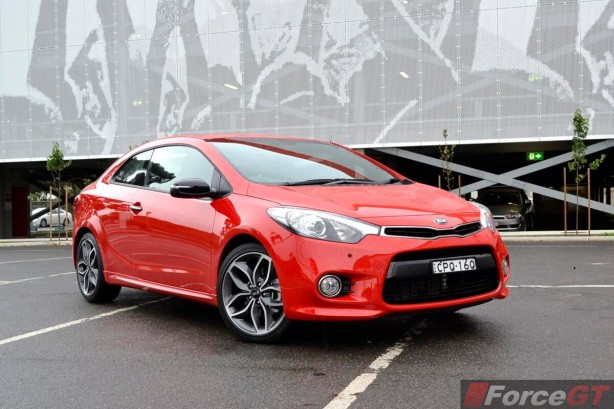 The 2nd-generation Kia Cerato Koup is the third and final model of the new Cerato lineup that has been gradually rolled out in the last year. According to Kia’s figures, the trio has achieved more than 2.5 million global sales since their introduction in 2004, including 385,000 units in 2012 when they accounted for close to 17 per cent of Kia’s total annual sales, making the Cerato the brand’s biggest selling model.

It’s no surprise then that the Kia Koup is a stunner from all angles. Created at Kia’s American Design Centre in California, there’s a newfound sophistication in its design. It’s sleeker, sharper and more muscular than its already good-looking forebear.

Sporting a slimmer dark chrome corporate grille than other Kia models, the Koup’s voluminous front bumper design, deeper and wider lower air intake and protruding lower ‘lips’ below the fog lamps sets the small coupé apart from its humbler siblings. In fact, except for the bonnet and front guards, every exterior panel on the Koup is unique to the car. The car’s profile is enhanced with the adoption of frameless doors and handsome 18-inch alloy wheels (17-inch on Si). 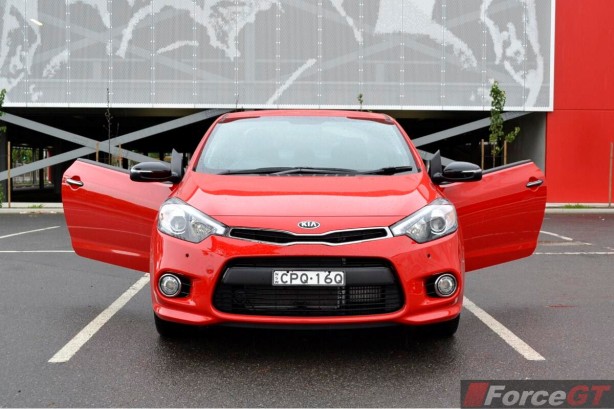 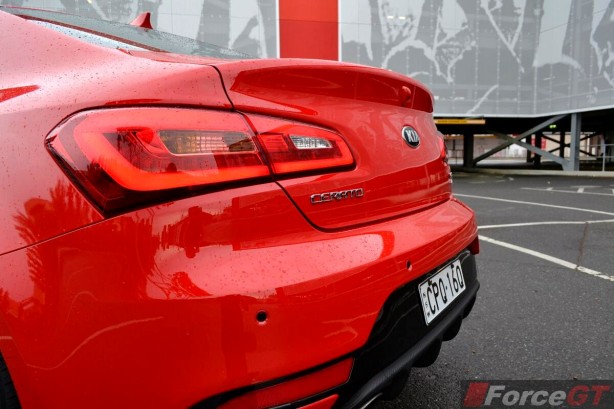 At the back, the boot lid has a built in spoiler to help with aerodynamics while further down, the two-toned bumper features a carbon-look diffuser with split dual exhaust pipes (Koup Turbo only). Its wide stance is further exaggerated by the simple yet classy rear LED combination lamp that also helps smooth the airflow around the back. As a result, the Koup’s aerodynamic drag is reduced from Cd 0.31 to 0.30.

Compared with its predecessor, the new Koup is 50mm lengthier, 15mm wider and 10mm taller. Its wheelbase has been stretched by 50mm and now measures 2,700mm – the same as the Kia Sorento SUV.

This translates to significantly improved cabin space. While the front occupants continue to enjoy generous accommodation, rear seats passengers who hop along for the ride will appreciate the extra 28mm in headroom, 51mm in legroom and 15mm in shoulder room. The Koup’s boot capacity, at 433 litres is also 12 litres more capacious than its Cerato sedan sibling, despite carrying a full size spare. 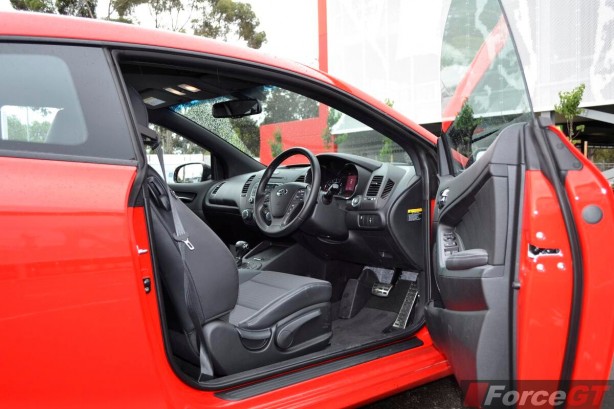 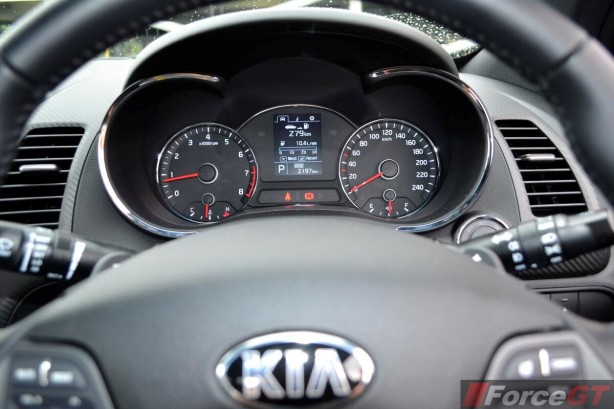 Like its sedan and hatch counterparts, the driver-focussed cockpit is an exercise in ergonomics and simplicity. All major and minor controls fall easily to hand and the layout is clean and simple. It is further enhanced with soft-touch materials, too, where they spill on to the upper door trims and door armrests. While there is nothing fundamentally wrong with the cockpit, its lack of visual excitement is an oversight. A bit of pizazz wouldn’t go astray here.

Unlike other small car-based coupés, the Koup is fitted with front seat belts extension guide so people who don’t practice yoga wouldn’t hurt themselves reaching around for the seat belt. 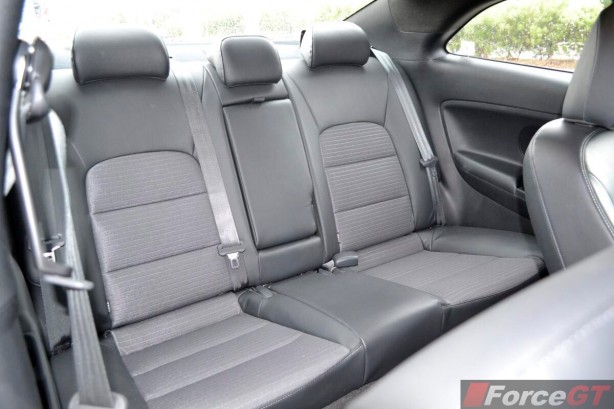 Likewise, to ease access to the rear seats, both front seats are equipped with a tilt-and-slide ‘walk-in’ device. Happily, it will also return the seats to their original position once done. There is also more storage space in the cabin than you can poke a stick at, including an 8-litre glove box, a 5.6-litre centre console box, as well as various cupholders for every passenger.

While many questioned the previous generation Koup’s lack of performance to match its looks, the 2014 Kia Koup Turbo is motivated by a 1.6-litre turbocharged direct-injection four-cylinder petrol engine – the first turbocharge powerplant for Kia Australia. It is shared with the Hyundai Veloster SR Turbo and develops 150kW @ 6,000rpm and 265Nm of torque @ 1,750-4,500rpm. 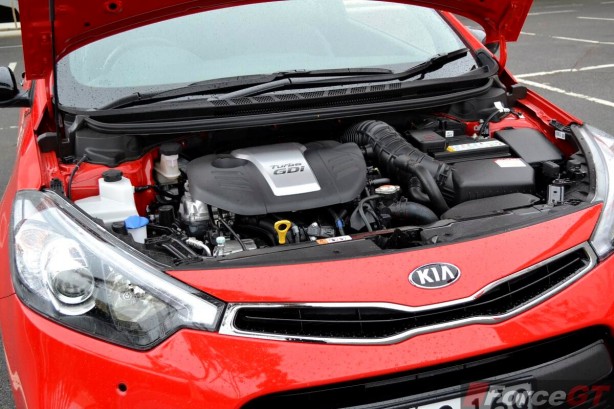 Married to either a six-speed manual, or in the case of our test car, a six-speed automatic transmission, the Koup Turbo will sprint from 0-100km/h in 7.4 seconds – not the quickest kid on the block, but around 0.1 second quicker than the Veloster SR Turbo. There is no sport mode to spice things up either.

Don’t expect theatrics of burbles and crackles from the Koup’s back end as well, because despite a free-flowing muffler and specially tuned exhaust, the exhaust note is anything but sporty. It gets worst in the cabin, where the engine sounds whiney and lacks the deep bassy note of a sports car.

While its steering is responsive and relatively direct, I’m not a fan of Kia’s FlexSteer system. It provides three different weightings for the electric power steering – Normal, Sport and Comfort – with least effort required in Comfort and most in Sport. As we have reported before, it feels artificial and doesn’t convey much feel from the road to the steering, a bit like reading braille with gloves on. It is also too light in all but Sport mode, where it’s best left in. Torque steer however, is well contained. 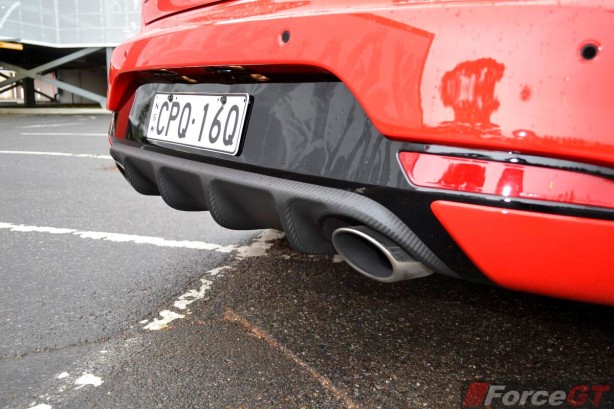 As with all locally delivered Kia models, the Koup’s ride and handling have been tuned to suit local flavours, with a decidedly Grand Tourer feel. Its ride is firmer than regular Ceratos but is amiably refined even over our third world-grade tarmac. The cabin is also well insulated from unwanted road and tyre noise, despite the frameless windows.

Its uprated brake package – 300 x 28mm discs at the front (up on 280 x 23mm on non-turbo Koup) also does a commendable job in bringing the car safely to a halt. 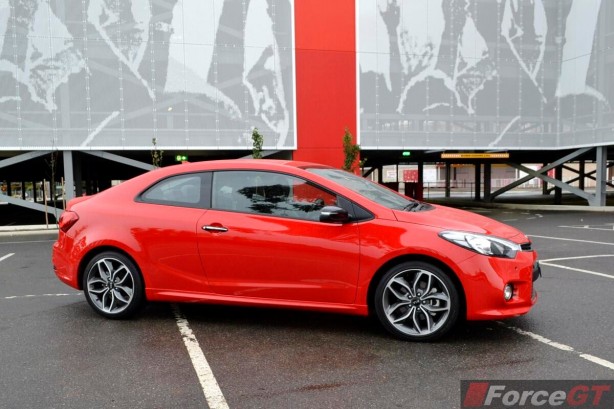 The 2014 Kia Cerato Koup Turbo ticks all the right boxes for an affordable small GT car. It looks better, drives better and is better equipped than its predecessor, while costing only marginally more.

While the new generation now has the performance to match its looks, buyers who don’t need the extra power are taken care of with the affordable naturally aspirated Si.