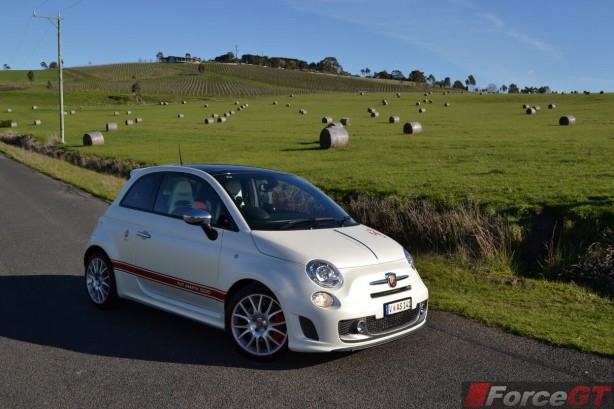 The Abarth 595 ’50th Anniversary’ celebrates the introduction of the first Abarth tuned Fiat 500 in 1963. Relaunched in 2007, Fiat’s performance arm Abarth had been making performance parts for the bambino since the early 50s before rolling out the original 595 at the Turin Motor Show a decade later.

Fiat calls the 50th Anniversary Abarth a “small supercar”. To us, it’s the yet-hotter version of the Abarth 500. Power comes from Fiat’s scintillating turbocharged, four-cylinder 1.4-litre T-Jet which has been boosted to 132kW and 250Nm thanks to an overboost function activated by pressing the ‘Sport’ button to adjust Electronic Control Unit mapping and turbocharger boost pressure.

The 595 is 14 kW and 49 Nm more powerful than the Abarth 500, and drives front wheels through an electronically actuated ‘Abarth Competizione’ five-speed sequential mechanical gearbox with steering wheel paddles.

Only 50 examples of the 50th Anniversary model have been secured for Australia and prices start at a hefty $45,000 excluding on-roads. The limited edition distinguishes itself from the standard Abarth through some bespoke ’50th Anniversary’ badges, 17-inch alloy wheels with 695 Magnesio Grey design embellished by a red liner and leather wrapped steering wheel with red inserts. There’s also the matte white paintwork that not only looks distinctive but also serves as the perfect canvas for the Abarth graphics. 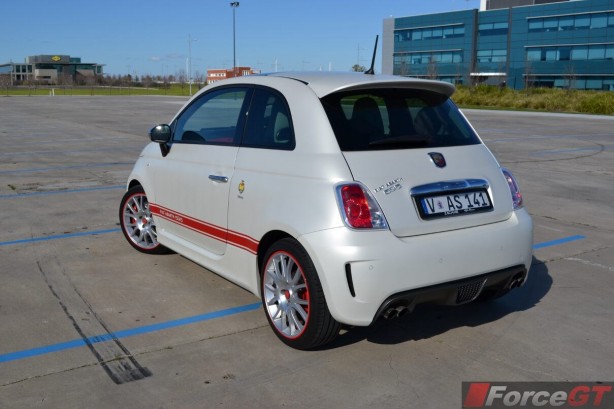 Being a hot Fiat, and like the Abarth 500, the 595 gets a wider front and rear bumpers, beefier side skirts and bigger rear spoiler. The car sits closer to the ground with its sports suspension, while a variable back-pressure dual mode exhaust system with quad tips further eliminates any doubt about its sporting intent.

Indeed, the 595 is fast and zippy, despite its modest 1.4-litre capacity. 100km/h arrives in 7 seconds from standstill, flat out it will crack 225km/h. With its pint-sized body and thin cabin insulation, poking the 595 around feels faster from the driver seat than it actually is. And that only adds to its fun factor.

The T-Jet engine revs through to 6500rpm, though it’s plague by turbo lag until the needle starts to point at the sky. But when the torque eventually arrives, this thing goes like the clappers, accompanied by that race car-like exhaust snarl as you flatten the throttle. 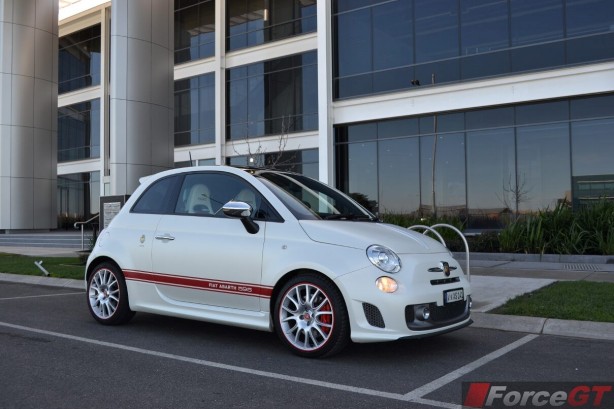 The single clutch five-speed sequential box is very mechanical in feel, with good placement of ratios, but doesn’t quite match a small turbo engine car like the 595. The power delivery just isn’t linear enough to feed the gearbox with onslaught of ammo shift after shift. Instead, it’s slow and clunky, especially in day to day traffic. We would much rather a DIY box, which sadly, is not offered in the 595.

Extra points go the Abarth’s ability to attack corners with excellent precision and body control. Tuck the steering wheel into a sharp hairpin and the 595 obeys, digging deep into its abundance reserve of lateral grip. In fact, on a tight and twisty course, the 595 feels almost like a go-kart with a roof, stringing corners with impressive agility and balance.

Get real close to its limits however, it starts to feel a bit ragged edge and the front end begins to lose its composure, but a gentle throttle lift will keep everything back into play. 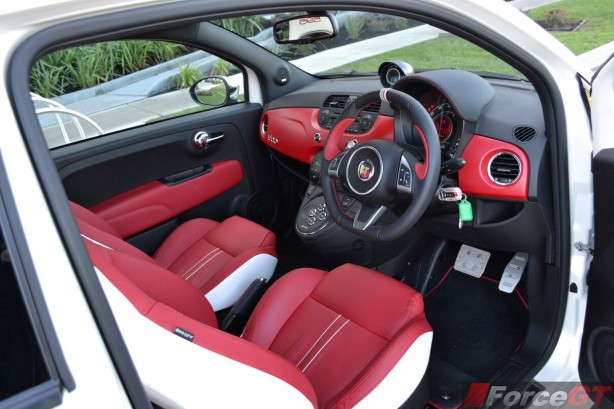 The uprated Brembo brakes acting on cross-drilled rotors offer plenty of bite right from the top of the pedal and stand up well against heavy punishment, but the steering isn’t communicative until some angle is dialed in.

Fitted with a sports suspension, the Abarth’s ride is, without surprise, very firm. On good roads, it’s not so much of a problem, but on bad ones, it’s jiggly and almost harsh. There is also a bit too much tyre noise coming from those super low profile rubber.

The hot Abarth is capable of decent fuel economy when driven sedately, but hammer it around and it will make no apology at the bowser. Over our test period, it managed 8.0L/100km, against an official combined figure of 6.5L/100km. 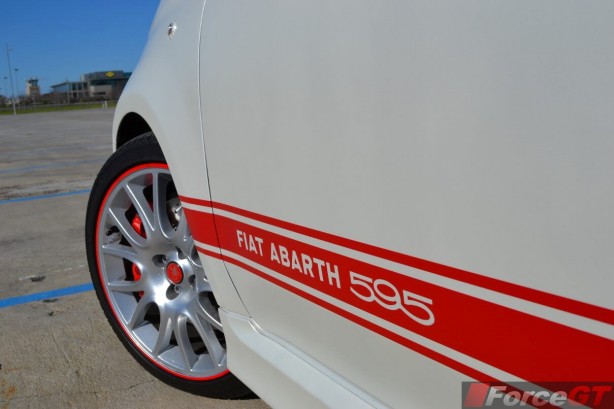 In terms of practicality, the Abarth offers adequate headroom and legroom for the front row occupants. There is proper rear seating for two adults at the back, although rear legroom can be an issue for larger adults. The 185 litres of boot space are tiny compared to the competition. Even with the rear seats folded down the Abarth only managed 550 litres.

The Abarth 595 ’50th Anniversary’ may be a collectors’ car but you have to be an absolute Abarth fanatic to part $45k for the Italian pocket rocket.

It’s got some real performance, and that charm and heritage are worth noting, but we would much rather save $10k and have the Abarth 500 with a proper manual gearbox, or pick from its many cheaper and more capable rivals.