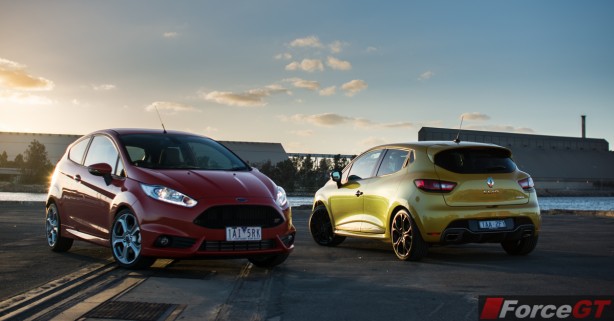 If the naughties were the golden age for the SUV, the teenies is definitely the golden age for the hot hatch. At last count, there were no fewer than eighteen of them in Aussie showrooms, ranging from the Ford Fiesta ST we have on test here – which can be had for an appetizing $25,990 – to the ballistic, and wet dream-inducing Mercedes-Benz A45 AMG – for a “mere” $74,900.

The list does not include the ‘warm’ hatches like the Citroën DS3 or Hyundai i30 SR either, as I couldn’t be bothered looking all of them up. 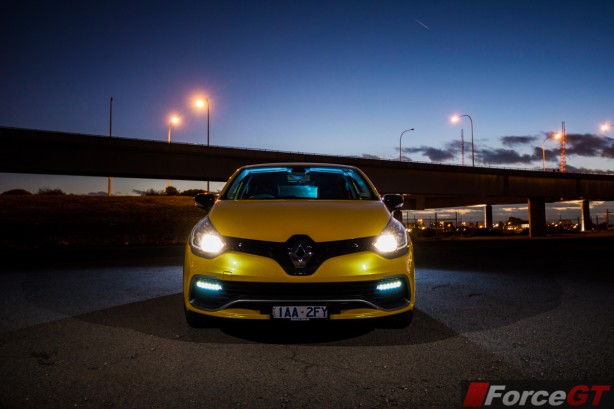 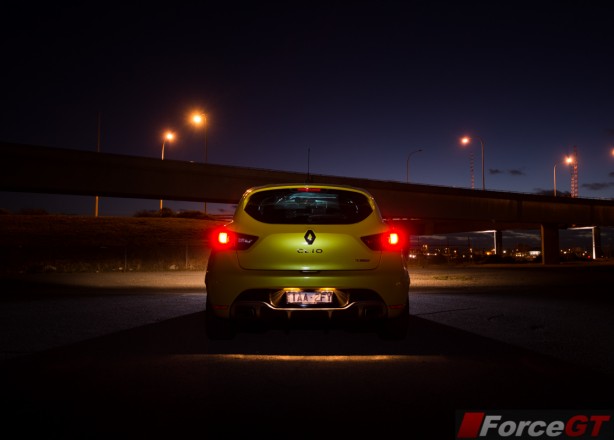 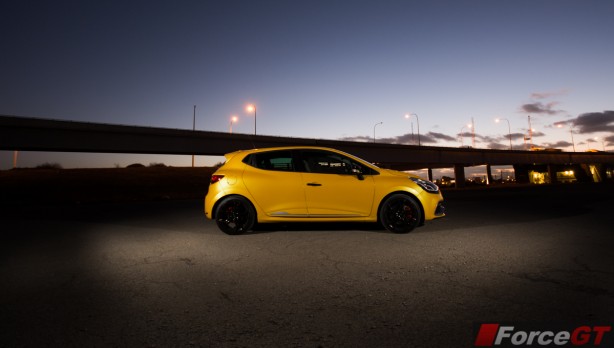 Instead of a three-door, manual-only naturally aspirated 2.0-litre four that fans have got accustomed to, the Clio IV is now a five-door, twin-clutch-only turbocharged 1.6-litre four proposition! 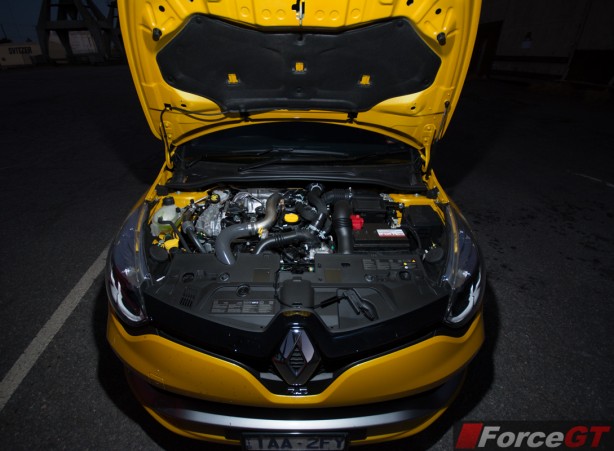 Unlike the DSG gearbox from Volkswagen, which is now as smooth as an expensive Chinese silk at low speed, Renault’s Getrag-developed EDC feels a generation behind. It is jerky in stop-start traffic and isn’t overly quick in its response, taking a while to process the driver’s request for lower gears in normal mode.

There isn’t much drama in the Clio when driven sedately around town either. The engine ticks along effortlessly, riding on its fat torque plateau and the throttle response is relatively languid. Even the EDC feels unhurried in its demeanour.

Hit the little silver ‘R.S. Drive’ button nestled in between the gear lever and the handbrake, however, and it’s an entirely different story. For a start, the engine rpm hovers 150-200 higher at idle, like at athlete getting set for a sprint at the Olympics. Mash the throttle and the little 1.6-litre roars into action with a guttural induction gurgle, followed by that distinctive, and utterly addictive twin-clutch ignition-cut ‘braap’ on 2nd and 3rd gear upshifts.

If the bright yellow paintwork (called Liquid Yellow) and black alloys hasn’t caught passers by’s attention by now, this histrionics is sure to do the job. Occupants won’t miss out either, as the air intake noise is magnified mechanically by a membrane and transmitted into the cabin via a pipe. 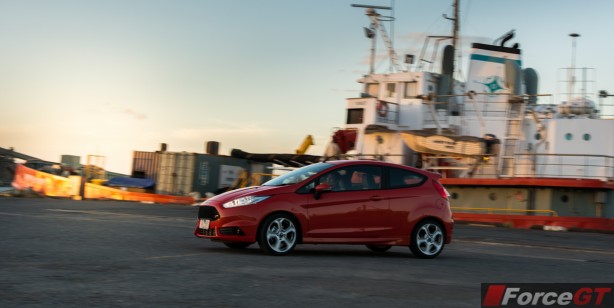 Like its French rival, the Fiesta ST’s induction noise is amplified by a ‘sound symposer’ inside the cabin, allowing the occupants to enjoy the vibrant engine note even more intimately. 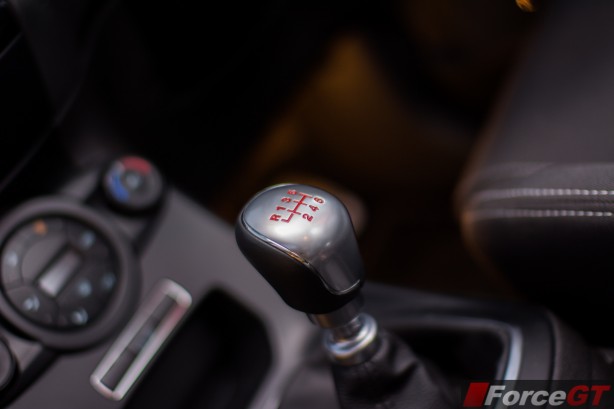 Paired with a deliciously smooth and precise 6-speed manual gearbox, the Fiesta ST harnesses its power and directs it to the front wheels with astonishing vigour. It has the aural edge over the Clio as well, with the engine coming on song by around 3,800rpm and stretching its vocal cords all the way to the edge of rpm cut-off.

They both feel quick off the line, too. But thanks to the Clio’s launch control function, the yellow RS rockets to the nearest horizon in just 6.9 seconds, followed two-tenths (both tested) later by the Molten Orange Fiesta ST.

In Sport mode, the Clio’s EDC dispatches gears lightning fast as the tachometer mounts an all out assault on the 6,550rpm cut out. Unlike some other similar systems, the Renault will hold its gears in manual mode, too. While the steering wheel mounted paddles are great on straight-aheads, they aren’t long enough during full lock. Thankfully, its gear lever’s manual mode is set up the correct way – forward for downshifts, and backward for upshifts – and is a joy to use. 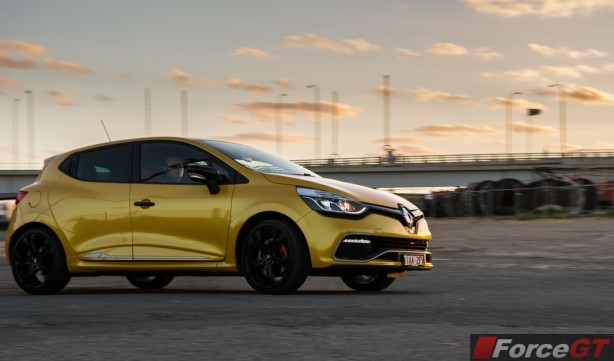 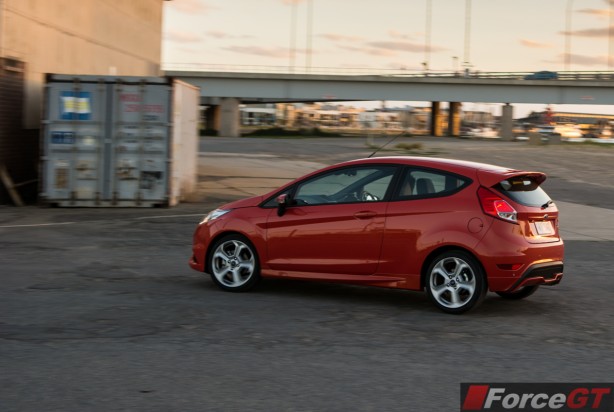 The Clio R.S.’ steering is well weighted, responsive and scalpel sharp. It turns in with great alacrity, giving the little hatch a very nimble feel. There is hardly any body roll around corners and under steer is well contained. Its chassis is superbly balanced, too, adjusting to corners with minute precision and delicacy. It will attack any corners thrown at it with poise and confidence.

Surprisingly, despite its focused nature, the Clio R.S.’ underlying suppleness makes it the car you want to take to the supermarket. There is a sheen of sublime elasticity to its suspension that allows it to absorb bumps and lumps remarkably well.

There is very little that separates the cheaper Fiesta ST from the R.S. dynamically. The ST is a little harder edge. Its taut suspension endows it with a flat cornering stance and there’s a tremendous amount of grip from the modest 205mm front tyres. However, its ride is noticeably firmer and busier around town, and is a bit twitchier on back roads. Its steering is just as sharp and responsive, but with the added benefit of telegraphing the driver with crystal clear information from the road.

The ST does have a tendency to under steer on the limit though, but not in an unexpected way. Compared to the Clio R.S., the Fiesta ST demands just a bit more from the driver for the same outcome. 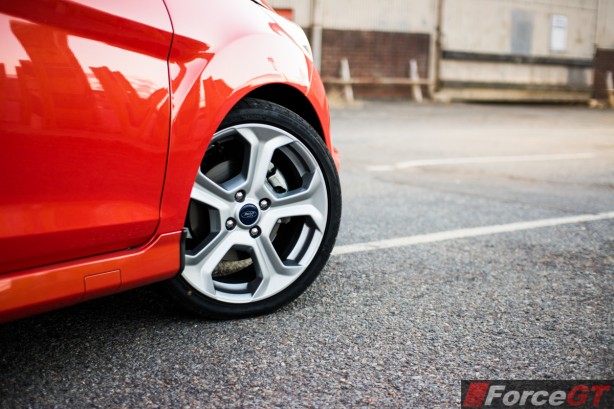 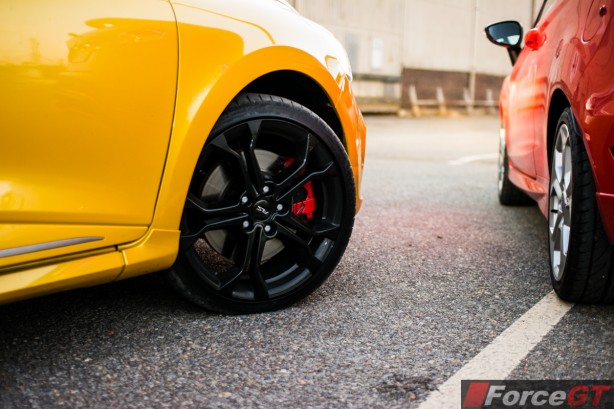 Step inside the Fiesta ST and you are thrown back to the last decade, with its riot of buttons on Sony-branded stereo and retro-looking fonts on the instruments. It might seem confusing at first but once familiarised, it isn’t hard to find your way around. On top of that, it doesn’t sound too bad either, in fact, much better than Renault’s ironic Bass Reflex system. 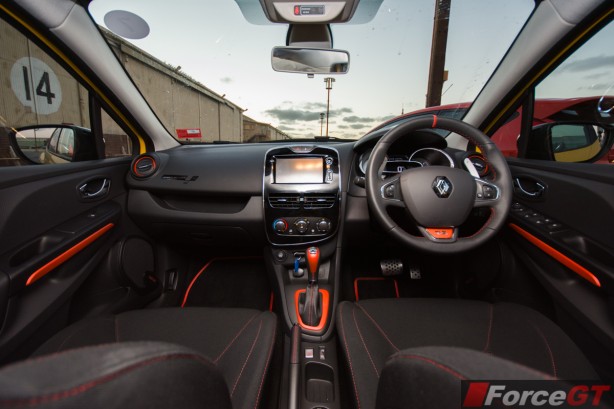 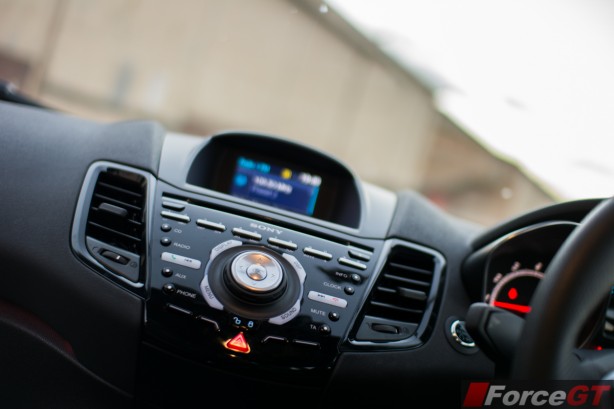 Unlike the Thai-built standard Fiesta, the German-sourced ST gets soft touch dash plastics which does its bit to lift the cabin ambience together with the sporty black headlining. The are also ST specific goodies such as those awesome Recaro front seats, ST steering wheel and perfectly placed alloy pedals.

The Clio R.S.’ interior is predominantly shared with the standard hatch, which isn’t such a bad thing as it feels and looks light years ahead of the Ford’s interior. Its LG-branded touchscreen is easy to use and comes with sat-nav powered by Tom Tom. I also like how the car will lock itself once you move away from it with the keycard in your pocket. 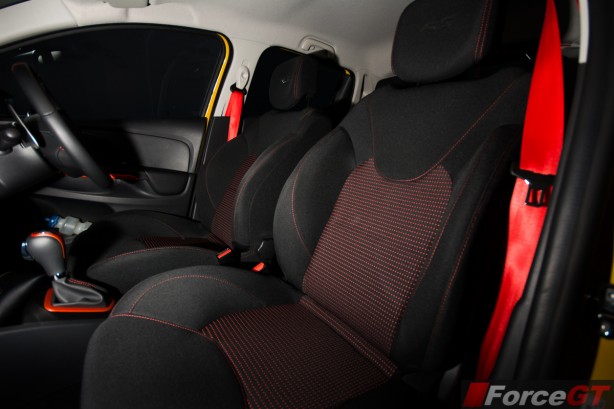 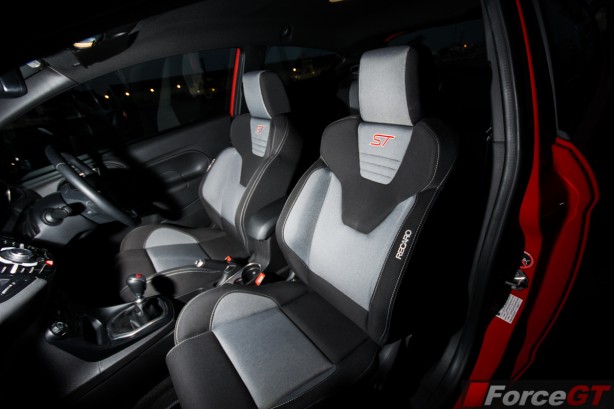 Like most things French, there are a few annoying quirks, such as the cruise control buttons on the steering wheel and the stubby audio control behind it. The former is annoyingly unintuitive to use, with the set and reset buttons on the right, and the speed control buttons on the left. Worse, they are not lit at night, so you fumble in the dark hoping you pressed the right button! The Clio also lacks any sort of rear park assist, not even annoying beepers!

However, these are all forgiven once you step outside the car and is greeted by one of the most beautiful shapes created by man. It’s simply stunning! Despite its diminutive proportions, the Clio’s muscular stance and coupé-like silhouette turns head wherever it goes, especially in the test car’s eye-shearing Liquid Yellow paintwork and gloss black alloys. The Fiesta ST, while not unattractive, looks pedestrian next to the Clio R.S. 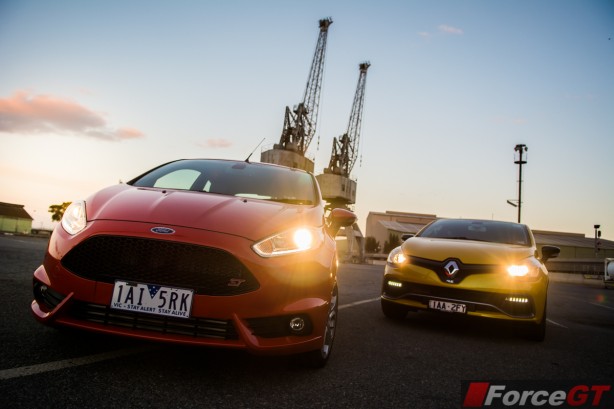 So here we are, two extremely capable hot hatches that are not only great fun to pun around. They are relatively efficient and don’t cost you your first born to buy or maintain.

Which would we rather take home? They are both extremely close dynamically. The eyes and the heart will always be drawn to the Clio R.S.’ seductive lines but for absolute driver’s involvement, it’s hard to beat the Fiesta ST. Its slick 6-speed manual is one of the best we have come across. There is also a bit more character in the orange car than the yellow one.