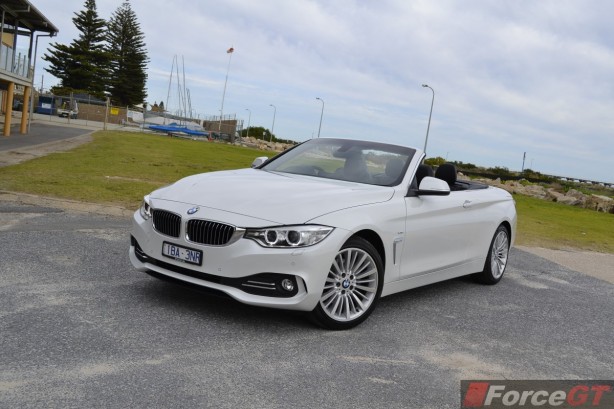 After what seems like an excruciatingly long and wet winter, the sun’s ray has finally made a triumphant return to chase away the cold mornings and the dark nights. With it, the milder temperature brings an outburst of colour and the welcoming scent of blooms in the garden.

While the new BMW 4 Series Convertible was launched in March this year, it wasn’t until recently that BMW Australia supplied us with a test car – after much pestering. 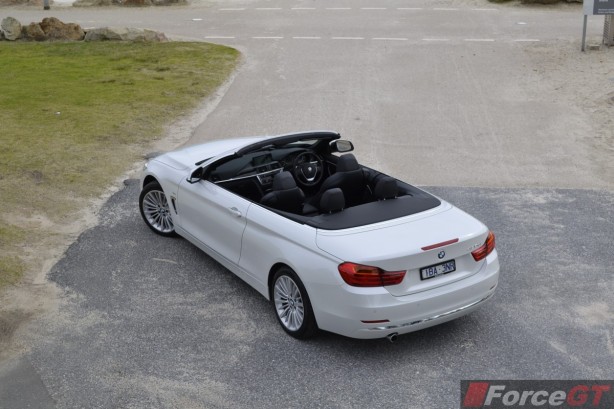 In fact, this test took place in the guts of winter, when most convertibles join the polar bears and hibernate. However, unlike some other drop-tops, the 4 Series Convertible is equipped with a folding hardtop that lets you enjoy the warmth of its lovely, climate-controlled cabin – roof up – while seeking out any opportunity to go topless.

Unfortunately for us, said window of opportunity is constraint because instead of the usual weeklong loan, BMW Oz said the 4 Series Convertible had “other commitments”, which meant we could only have it for five days.

Luckily, the stars aligned and our window of opportunity presented itself on a “mild” and sunny winter weekend. I pulled on my white lambs wool, cable knitted Tommy Hilfiger crew neck sweater and wrapped the navy blue Brookfield scarf I got for Christmas around my neck and headed for my favourite piece of black top. 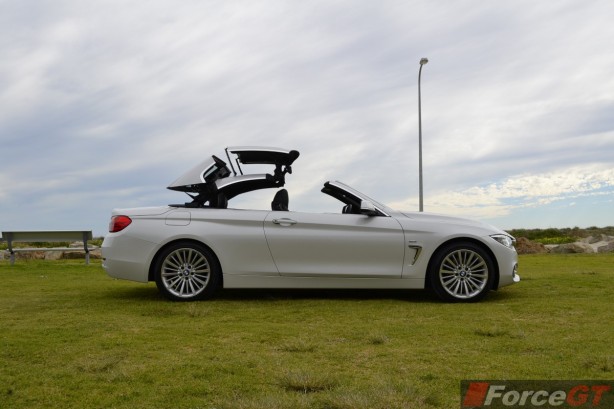 I hit the button that folds the three-piece roof cleverly into the boot, and turned up the standard seat warmers before setting off. Even without the wind deflectors in place, the cabin stays relatively draft free with the side windows up. Refinement is also respectable with the roof down.

With the lid over your head, the 4 Series Convertible has an extraordinary ability to filter out most major noise intrusion, thanks to the new car’s more noise absorbent headliner. 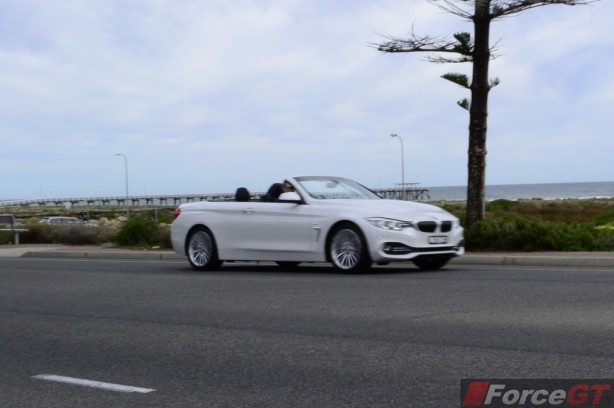 Its 2.0-litre four-cylinder turbo-diesel engine is a tad noisy, even with the roof closed, and especially when one is enthusiastic with the throttle. It’s no rocket ship either, but with 135kW of power and 380Nm of torque available from just north of idle, it is capable of effortlessly shifting the Convertible’s 1,680kg heft.

While it’s unlikely to lay a set of elevens at the lights, the engine’s chubby mid-range and its willingness to spin to 4,000rpm and beyond make the 420d deceivingly fast. 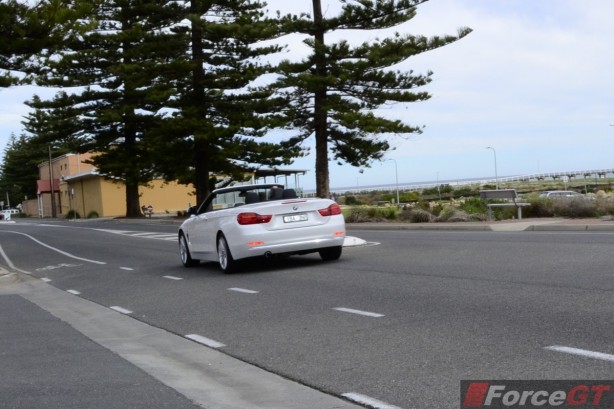 Matched with one of the best 8-speed automatics in the business and a standard non-adjustable suspension, the Convertible will string from one great big sweeping corner to another with surprising fun – provided the surfaces are relatively smooth. There is also plenty of grip from the modest tyres.

On Australia’s evil, third world-grade back roads however, the 420d’s dynamic limits will start to unravel. Its wonderfully composed demeanour gradually peels away, with faint traces of body roll and understeer simmering to the surface at around seven-tenth. Pushed harder and the hardtop’s weight penalty will also start to make its presence felt.

Happily, the BMW’s well weighted steering is quick, accurate and responsive. There is also useful feedback to tell you if you are about to hit the 420d’s dynamics limit, which is quite high for a convertible. In the Sport+ setting, one can easily provoke the tail to step out in tight corners, which isn’t necessarily a bad thing either, as it adds to the car’s sporty character. 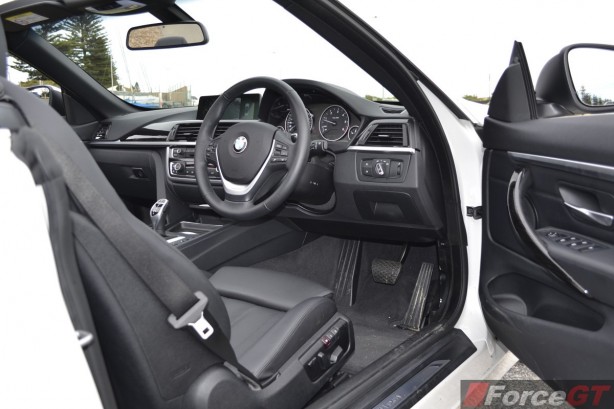 The sporting brief continues with the driving position. You sit low with legs stretched out. Compared to the 3 Series Convertible it replaces, the 4 Series Convertible has a 50mm longer wheelbase, wider front and rear tracks (+45/+81mm) and sits 10mm closer to the ground.

It is also one of the more masculine Convertibles around today, ensuring your manliness remains intact if you fancy a bit of top down motoring. The car’s sleek and elegant silhouette is almost indistinguishable from the Coupé with the top in place.

Else where, all the hallmarks that make the Coupé such a stunning presence on the road are there – the precise contours and multifaceted surfaces, its wide stance, the slightly forward-slanting BMW kidney grille, the large air intake in the front apron and the new Air Curtains. 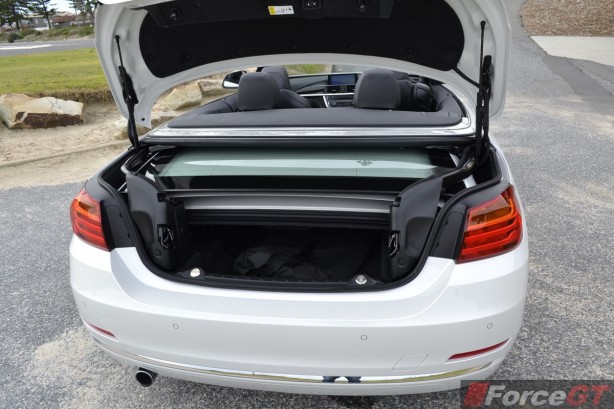 BMW has also addressed the old car’s complex system of getting you luggage out of the boot with the top down by adding a simple ‘up and down’ rocker switch in the boot lid. Press ‘up’ and the entire rear deck, including the stowed roof arrangement, lifts straight up in the air, allowing access to the whole boot. Once you have retrieved your luggage, press ‘down’ and the roof will magically move back into place.

At $88,800, the 420d Convertible is a significant $16,500 more than the equivalent 402d Coupé. However, you get the best of both worlds – a hardtop grand tourer that promises to bring the rays to your head in 20 seconds.

You also get one of the best handling (albeit with flaws), not to mention handsome, convertibles in its class.