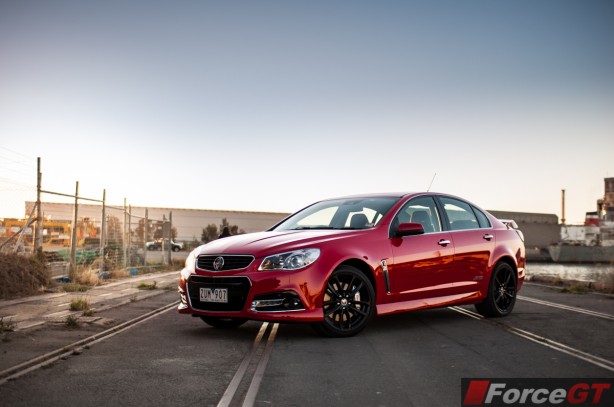 Back in September, we drove the 2013 Holden VF Commodore SSV and were impressed by its sharp handling, quality and unbeatable value for money. It didn’t take too long before we find ourselves getting behind the wheel of its high performance cousin, the SSV Redline, to find out just how much more performance you can get for another $6k on top of the SSV’s sticker price.

From the outside, the Redline can be distinguished by a larger rear spoiler, lower ride height and redesigned wheels, which in the case of our test vehicle, are coated in tough looking black paint job. The staggered wheel arrangement is composed of forged 19-inch all round measuring 245/40/R19 for the front tyres and 275/35/R19 tyres at the rear – the widest wheels and tyres ever fitted to a mainstream Holden.

The visual differences are subtle but enough to give the Redline a more aggressive stance overall, especially with those fat rubbers at the rear axle. 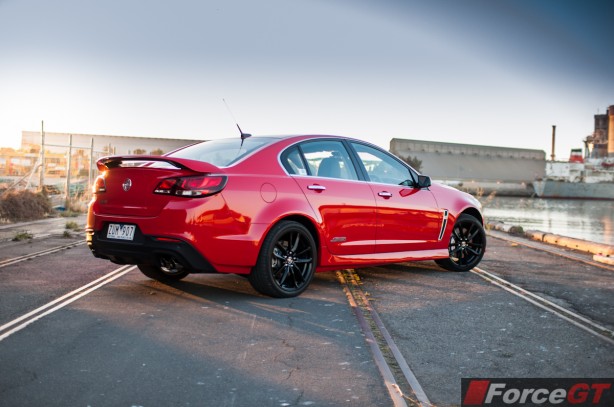 The Redline shares the same powerplant and transmissions as the standard SSV – a smooth 6.0-litre V8 engine channeling 270 kW of power and 530 Nm of torque (260 kW / 517Nm for the automatic) to the rear wheels via a six-speed automatic or manual transmission (as tested). The exhaust in the Redline is also carried over from the SSV, which is a shame as it is too muted for our liking. 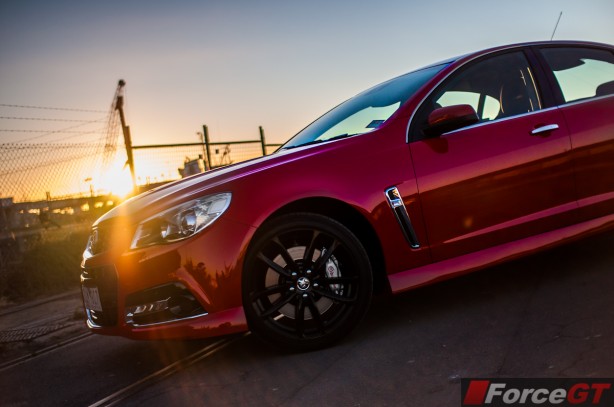 Ok, I get you. None of those is worth the premium over the standard SSV. Correct? Well, the good news is the Redline is not just a tarted up SSV with some eye candies. It’s primary focus is on improved driving dynamics.

To accomplish this, Holden has fitted the Redline with a retuned FE3 suspension set-up (FE2 in the SSV) and added new lightweight aluminium chassis components – including larger bore struts with rebound springs and new damper tuned for sportier driving, as well as the biggest stabiliser bar ever fitted to a Commodore.

The result is noticeably sharper handling, with less body roll and better composure around the bends. In the Redline, you feel less of the 1.7 tonne kerb weight compared to the SSV, which in itself is already a very manageable large sedan. Instead, you feel more confident through an improved chassis and dynamically one of the best steering wheels in its class. In a section of our test course littered with thick and tight corners, we couldn’t thank more for the extra grip coming from the wider rear tyres. 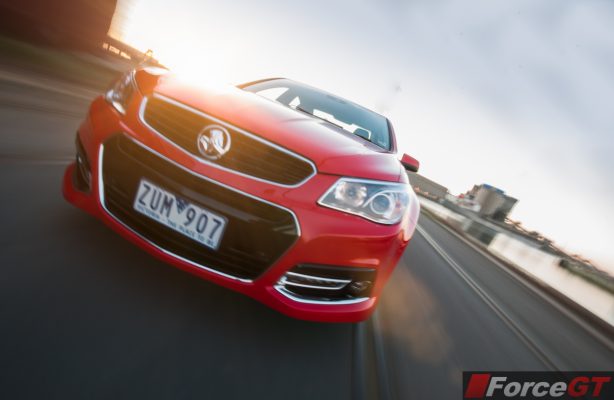 Has the Redline become too serious? Only if you keep the traction control fully on. Turn it off completely and the Redline will still easily light up its rear on every corner. Exclusive to the Redline is the new Electronic Stability Control program called Competitive Mode that loosen up electronic intervention, kicking in only if an idiot is detected in the driver’s seat. Designed for track use, there is greater emphasis on steering input and feedback at higher speeds.

For models equipped with the six-speed manual transmission, such as the one tested here, the calibration also includes Launch Control, which most petrolheads would be familiar with. However, it took us a good 10 minutes to work out the rather tedious sequence in the Holden. Bring the car to a halt. Turn off traction control. Put car into first gear and keep clutch depressed. Floor the gas pedal. Release and launch! At least that’s how other launch control system works, but all we got was screeching tyres and plenty of smoke. Turns out that we didn’t turn the steering to the straight ahead position. Who would have thought?!

The front brakes are now larger Brembo items which allow the Redline to bite harder and in a track environment, exhibit much less fade in comparison to the SSV’s brakes. 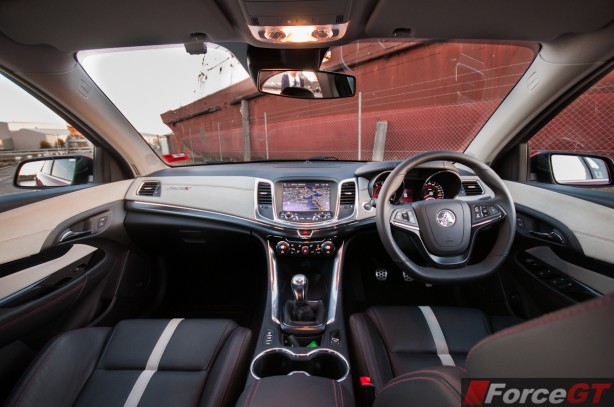 Away from the spirited hill runs and back in the “civility” of cruising around town and on the freeway, things become calm and relax. Unlike most cars with sporty bloodline, the ‘supposedly’ track-oriented Redline is able to maintain a ride quality plush enough for everyday use. It has almost similar levels of ride comfort as the SSV, only just a little firmer. We always believe good handling does not have to equal trashy ride, and the Redline is one such case.

There is no doubt the 2013 VF Commodore SSV Redline is a real driver’s car. It’s a car that you can take to the track and satisfies your needs at the twisties. Plus, it can also carry a family of five in great comfort. Comprehensively equipped, it is one of the best value sports sedans on the market today, if not the best.

I hear you ask – is the Redline worth the extra coin over the regular SSV? Dynamically, the Redline is sharper than the SSV, but not by a great deal. If you’re a true enthusiast and a visit to the track is occasionally part of your weekend plan, absolutely. But if you’re just a car nut, albeit not a crazy one, and not too concerned about the extra features, the standard SSV will do the job just fine.