YouTube’s netizen, Cvdzijden, has caught the 2015 Audi R8 undergoing testing on the Nürburgring in Germany.

Set to be 50 – 59kg lighter than the outgoing model, the new R8 will take on an evolutionary approach to its styling. There will be a more aggressive front fascia with more angular matrix-beam LED headlights, while at the back, the car will sport slimmer taillights and a deep Le Mans inspired diffuser sandwiched by a pair of tailpipes at both sides. The R8 distinctive side blade will carry over as well, albeit shortened.

The current R8’s dated cabin is also set for a major overhaul and is likely to get a digital instrument cluster, as seen on the latest Audi TT, along with digital rear view mirror and updated MMI infotainment system. 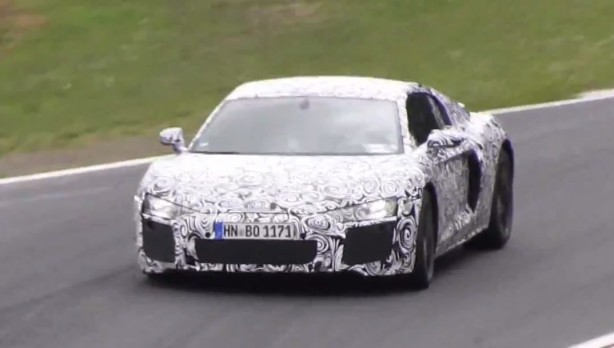 Both engines are expected to be paired with a seven-speed dual-clutch gearbox and a quattro all-wheel drive system.