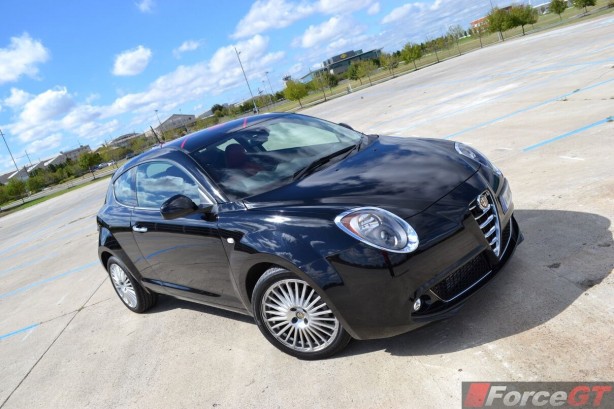 The Alfa Romeo MiTo is the Italian marque’s first city car since the much lauded Alfasud from the late 70’s. Created to take on class favourites like the MINI and Fiat 500, the MiTo aims to be a fun and inexpensive offering targeted at young urbanites.

While looks are never an issue for any Alfa Romeo’s, can its Fiat Punto-sourced platform live up to Alfa’s dynamic handling mantra? Let’s find out….

Alfa Romeo has unashamedly said the MiTo has styling inspired by its 8C Competizione supercar. Frankly, we struggle to find the connection besides the chrome-plated v-shaped grille and perhaps the oval headlights.

Nevertheless, the MiTo looks distinctive enough and could even be described as cute, especially in the more upmarket Distinctive trim, with bigger and better looking alloys plus a few chrome finishes.

Its frameless doors are also a nice touch. 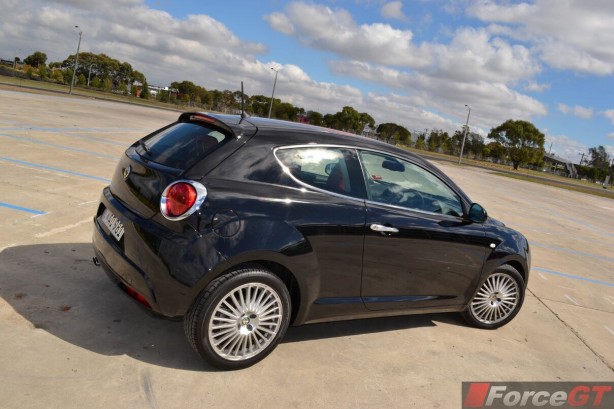 Step inside, and there is an undeniable sense of occasion, especially with the racy red-blacklit instruments and Alfa Romeo’s trademark 6 o’clock needle resting position. However, it doesn’t take long before you notice the confusing mix of generally hard plastic and low rent centre console with switchgear that feels cheap, even in a 5 year-old Korean car.

Drop into the driver’s seat and you will notice immediately you sit lower than most cars in its class – a rarity and about the only thing sporty about the MiTo (we’ll get to this later).

The front seats are generally comfortable and it’s easy to find a good driving position, but they could do with a little more lateral support. The steering adjusts for reach and rake, too. 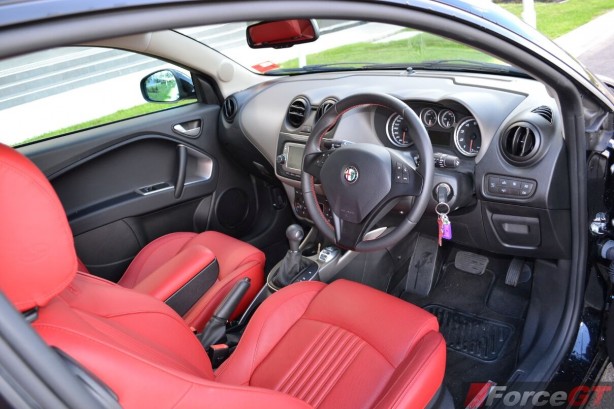 Rear seat accommodation isn’t huge either, although two averaged size adults will have no issue tolerating the confined space for short distances – if they haven’t had too much of a good life.

Weekend shopping is taken cared of by the 270-litre boot space behind the hatch. While not class leading, it is still over 100 litres more than that of a MINI Cooper, but just less than the Ford Fiesta.

The headline news in the 2014 Alfa Romeo MiTo is the 875-litre turbocharged 2-cylinder tiddler donated by Fiat in the entry-level model. It produces 77kW of power and 145Nm of torque while returning a claimed fuel consumption of 4.2L/100km.

While most of my peers are enthusiastic fans of this award-winning engine, I’m one of the odd ones out that finds it noisy and gutless. Maximum power and torque don’t arrive until a stratospheric 5,500rpm. Consequently, the tinny lawn mower-like engine note is a constant, and unwelcome, companion.

To get any decent oomph out of the engine, the Dynamic mode in Alfa’s trick DNA system is your best friend. It changes the throttle mapping and boost pressure, amongst others, for better immediacy (throttle response in Normal mode is very spongy and requires a lot of travel before the engine response).

The 1.4-litre turbo four pot in the Progressive and Distinctive models offer a much better drive and is more suited to the car’s overall dynamic (more on this in the next section). 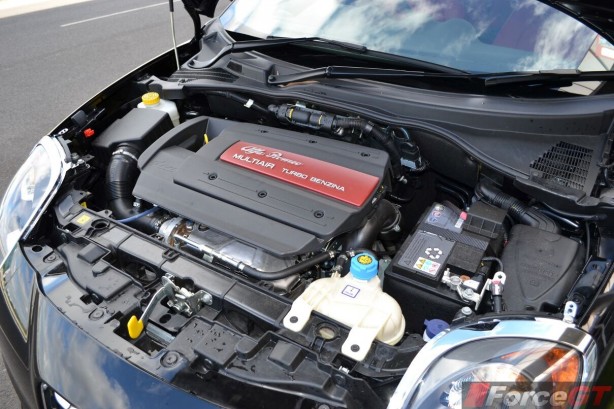 If you choose the Twin Air, be prepared to put up with the imprecise 6-speed manual as well, as you are likely to spend a lot of time rolling through the gears. While it is nowhere near as notchy as the manual gearbox in the Peugeot 208, it isn’t the slickest either.

The six-speed twin-clutch isn’t a much better choice either, as shifts are vague and slow compared to its key rivals. It also tends to drag on for too long in first gear.

The MiTo is as sporty as Gina Rinehart attempting the pommel horse at Olympics. While it grips strongly and changes direction well, there are some crashing shortcomings in Alfa’s latest offering.

Its ride quality is firm and crashy over most road surfaces but the smoothest of black tops and its steering is listless just off centre. It feels overly light in Normal mode, while Dynamic mode adds some much-needed weighting; there isn’t much in terms of feedback in either mode.

Throw it around corners and the MiTo behaves like a child on tantrums, rolling its body from one corner to the next, with its rear end bouncing off any road imperfections. 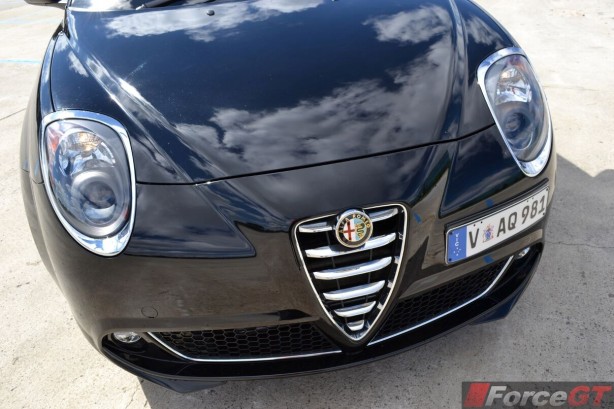 The Distinctive model is dynamically much sharper thanks to shock absorbers with rebound springs and anti roll bar at the front axle, and Alfa’s Active Suspension at the rear, a variable damping setup that interfaces with Alfa’s DNA system and the driving style.

Road noise intrusion at freeway speeds is higher than ideal, compounding the already noisy engine in the Twin Air for a rather unpleasant atmosphere. The larger 1.4L unit is much more effortless at cruising the freeway.

While there’s no denying the MiTo’s interior design is one of the better ones in the city car class, its build quality and materials are below class standard. Fit and finish also let the cabin down in an era of ever improving quality from major European and Japanese rivals.

However, the optional sports leather upholstery feels premium and does lift the MiTo’s otherwise budget-spec interior up a few notches. 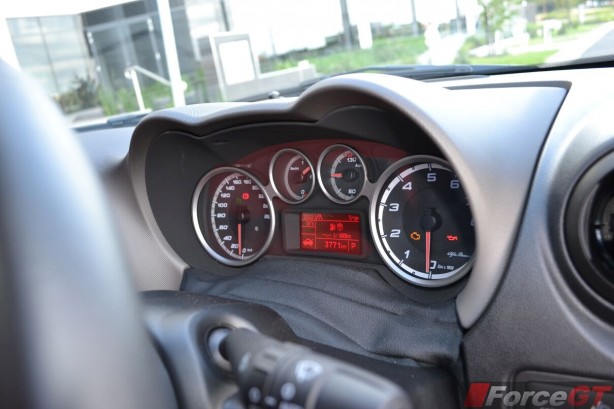 Due to the constant need to pile on the revs, the MiTo Twin Air’s fuel economy has taken a beating, returning an average of 7.4L/100km while on test. The 1.4L in the upper models isn’t impressive either, recording 8.9L/100km against an official combined figure of 5.5L/100km.

The good news is the Alfa Romeo MiTo is quite well equipped.

The 2014 model update also benefits from a number of changes, notably the new six-speaker Uconnect Infotainment system, which has a five-inch colour touch screen and allows the user to wirelessly stream Bluetooth phone and audio. It also shows ambient temperature, trip information and fuel consumption. 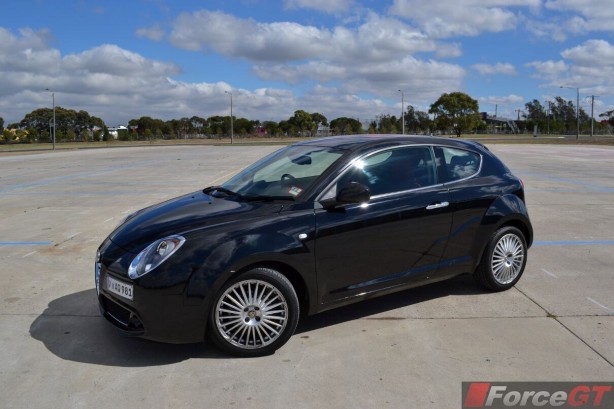 The Alfa Romeo MiTo gets a full complement of stars from ANCAP.

7 airbags are standard as well as anti-whiplash front seats and LED rear lights.

The Alfa Romeo MiTo is a good-looking city car that is reasonably well equipped. Its Italian badge may also find friends with those looking for, well…something Italian.

However, like most recent Alfa’s, it fails to live up to the brand’s dynamic handling mantra and rides poorly.

The MiTo also has a bit of catching up to do in terms of fit and finish.