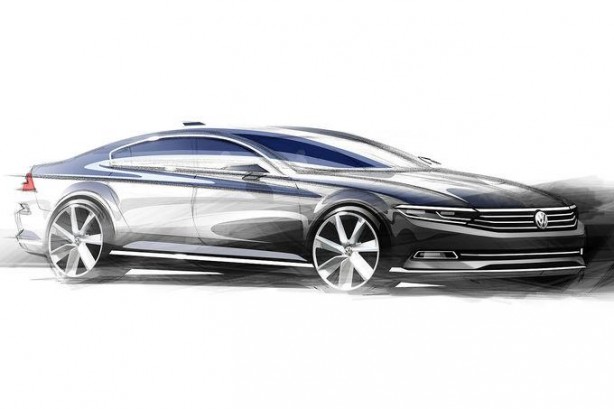 Volkswagen has released a few sketches of its eighth-generation Passat. While we know that sketches, like concept cars, generally look better than the end product, they do give us a pretty good idea of what to expect, minus the oversized wheels and shallower than practical glasshouse.

So from that, it is safe to deduce that the next Passat will shed its grey cardigans for more stylish round neck knits! With chiselled lines, a fast flowing roof and wide stance, the new Passat will be the best looking yet. Question is, will Volkswagen leave enough room for the more stylish CC?

Like the new Golf, the all-new Passat will ride on Volkswagen’s modular MQB platform and adopts the Golf’s new electronic architecture, as well as safety systems, along with a few of its own. 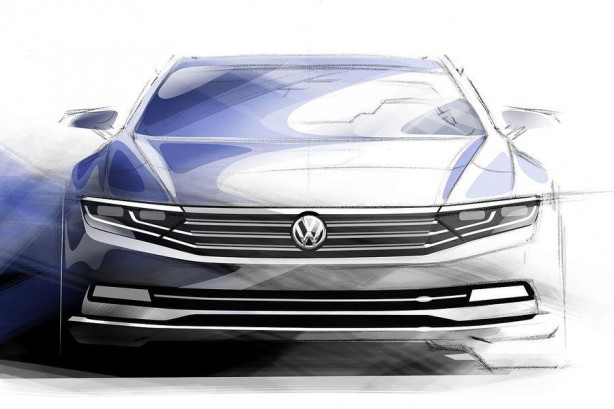 It will be the first Volkswagen product to use an Active Info Display, meaning a fully digital instrument cluster, much like the one that debuted on the all-new Audi TT. Safety wise, it will get City Emergency Braking, a pedestrian monitoring system, autonomous emergency braking, a system to help park trailers and a Traffic Jam assist that momentarily takes over the wheel from the driver.

Due to a potential weight savings of 85kg over the outgoing model, buyers can expect substantial improvements in efficiency.

According to Volkswagen, it has saved 40kg in the engines alone, courtesy of downsized turbocharged four-cylinder engines. Another 30kg has been shed, thanks to hot-formed and ultra-high strength steels in critical areas. The new Passat is also the first to feature aluminium in its body.

Elsewhere, lighter materials in its suspension system helped save 4.7kg in its rear suspension, while a lighter steering system saves another 2.2kg. 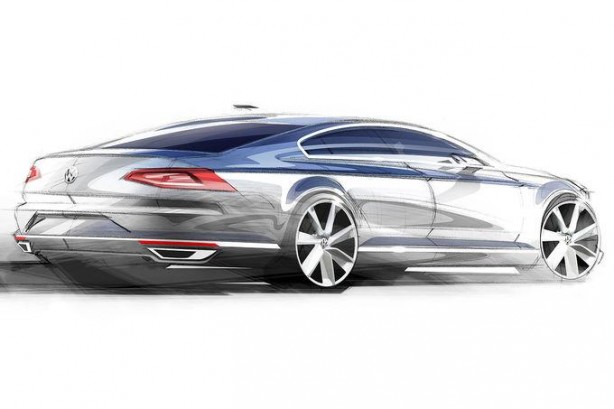 Despite the extensive weight lost, Volkswagen claims the Passat’s body rigidity has increased by 2000Nm/degree to 30,000Nm/degree.

A range of familiar Volkswagen Group engines will go under the bonnet of the new car, ranging from 88kW to 206kW of power. An all-new 176kW/500Nm 2.0-litre four-cylinder twin-turbo diesel capable of returning a claimed economy of just over 5.0L/100km will also be introduced.

Based around the existing EA288 engine family, the new mill gets stronger connecting rods, pistons, crankcase, crankshaft, new piezo injectors capable of 2,500 bar and a high performance cylinder head. It is married to a 7-speed twin-clutch gearbox and all-wheel drive as standard.

A plug-in hybrid version is also said to be on offer, boasting 155kW of power and 400nm of torque while promising a mere 1.5L/100km on the combined cycle.

Inside, the cabin is set to get a major overhaul, with a massive 12.3-inch TFT screen as standard. Its 1440 x 540 pixels can work in either 2D or 3D layouts. An interactive instrument cluster on higher specification models – dubbed Active Info Display – allows the speedo and tacho to move aside, allowing a bigger navigational instruction when needed.

Safety wise, a Trailer Assist function helps deliver perfect reversing with a trailer every time. The system uses the car’s reversing camera and constantly watches the trailer and responds to the driver’s input via the side-mirror adjustment toggle – much like a joystick.

The 2015 Volkswagen Passat will officially bow in at the Paris Motor Show in October, with Australian sales starting second half of 2015.