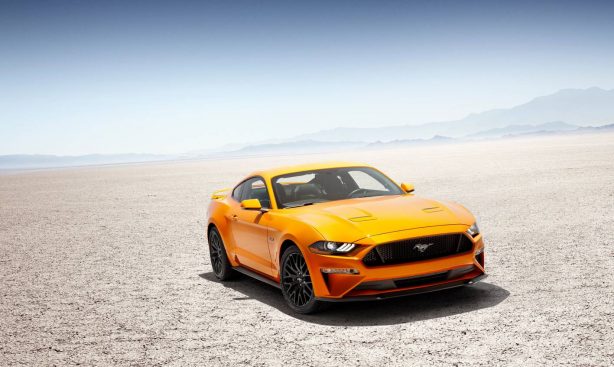 Ford has updated the popular Mustang sports coupe as part of its mid-life facelift for 2018. Unveiled today by Ford’s ambassador of Service, Dwayne ‘The Rock’ Johnson, the latest iteration of Mustang is said to be the nameplate’s most advanced ever and is due to arrive later this year.

The host of improvements include new technology and design changes giving owners wider customisation options, better performance from more powerful engines and new “MagneRide” variable damping suspension. Customers have more ways than ever to personalise Mustang to make it their own, with three new paint colors, 12 distinct wheel choices and a customisable digital instrument cluster. 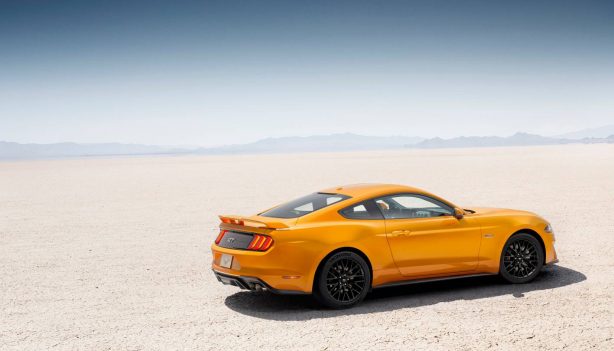 Ford tapped Johnson to reveal the new Mustang to the world by giving one of the first models available to a deserving member of the military. A video of the debut was launched on Johnson’s social channels, including Youtube, Instagram and Facebook, where Mustang holds the title for the most-popular car with more than 8.4 million ‘likes.’

Ford says the new Mustang is so customisable that even its engine note can be adjusted. An all-new active valve exhaust system is optional on the V8-powered Mustang GT, with a fully variable soundtrack to match the entire acceleration range. 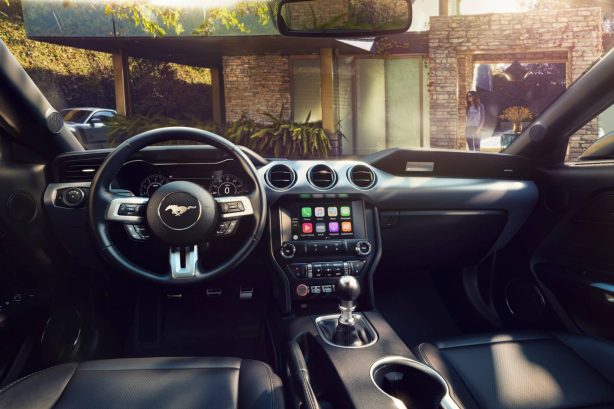 Ford SYNC Connect with FordPass is available on the Mustang for the first time. When using the FordPass app for smartphones, drivers can start, lock, unlock and locate their car for ultimate convenience.

Ford has tweaked the Mustang’s chassis for improved dynamics. On all models, new shock absorbers promises better ride control, while a new cross-axis joint in the rear suspension is said to increase lateral stiffness.

MagneRide damper technology is a new option with the Mustang Performance Package to optimise ride and handling in all situations.

At this stage, Ford has not disclosed power gains over the existing engines, which stands at 233kW/432Nm for the EcoBoost and 303kW/525Nm for the V8.

A new 10-speed automatic transmission, available with both EcoBoost and V8 engines, is said to be the best automatic Mustang has ever offered. With a wide-ratio span and optimized gear spacing, this all-new gearbox promises improved responsiveness and performance. 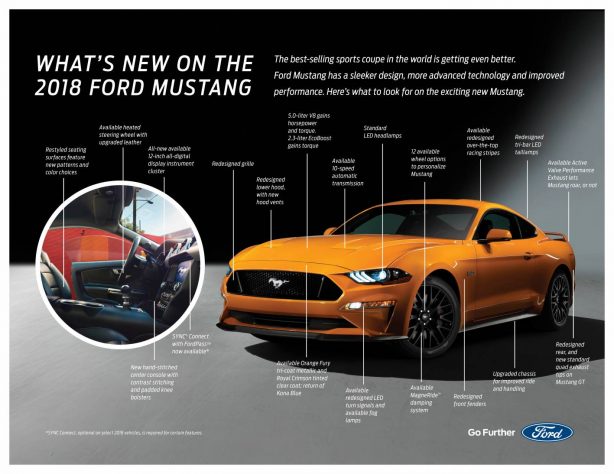 Visually, the new Mustang gains a new grille, revised all-LED headlights, a restyled front bumper and a redesigned bonnet punctured with a pair of heat extractors.

The rear of the car gets revised LED taillamps, a new bumper and optionally available fixed rear spoiler. Dual-tip exhaust is standard for EcoBoost Mustang, while V8-powered Mustang GT gets a standard quad-tip exhaust.

The new 2018 Ford Mustang is expected to arrive into Australian showrooms in the fourth quarter of this year.