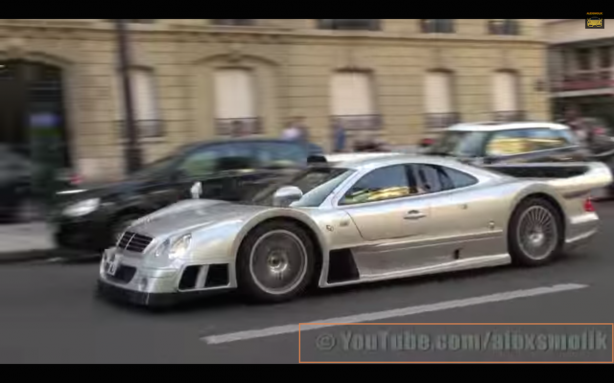 An ultra rare Mercedes-Benz CLK GTR has been spotted roaming the streets of Paris by YouTube poster, Alex Molik.

Only 25 units (5 of which were roadsters) of the CLK-GTR were ever produced between 1998 and 1999 by AMG at the Affalterbach factory, each motivated by a massive 6.9-litre 12-cylinder engine producing a mind boggling 456kW (621PS) and 731Nm of torque.

While its top speed of 320km/h (199mph) is nothing to shout about these days, with any of the supercars produced in the last 10 years capable of exceeding that, the FIA GT1 championship car was still able to dash from 0-100km/h in a mere 3.8 seconds.

The CLK-GTR is still considered as one of the most exclusive vehicles Mercedes-Benz has ever produced, with a price tag of €1,273,446. All were produced in left hand drive, except for one, which was specially built for the Sultan of Brunei in right hand drive.