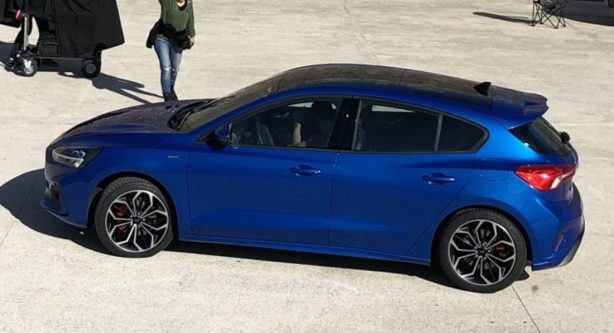 The all-new 2019 Ford Focus has been caught without a shred of camouflage ahead of its world debut in April at a special event.

Caught on camera by a Carscoop reader, the hatch appeared to be out on a photo shoot in Cascais in Portugal.

Wearing an attractive blue shade with two tone alloy wheels, the Focus you see hear is likely to be the ST Line variant hinted by the small badge on the front guard and an aggressive roof spoiler.

The new car’s design is a dramatic departure from the outgoing model, sporting classier lines in its quest to move upmarket, as outline by Ford head of global markets, Jim Farley. Certain markets will also get a range-topping Vignale variant that competes with the entry-level premium marques such as the Mercedes A-Class and Audi A3.

The new-generation Focus will hit production in the second half of 2019.