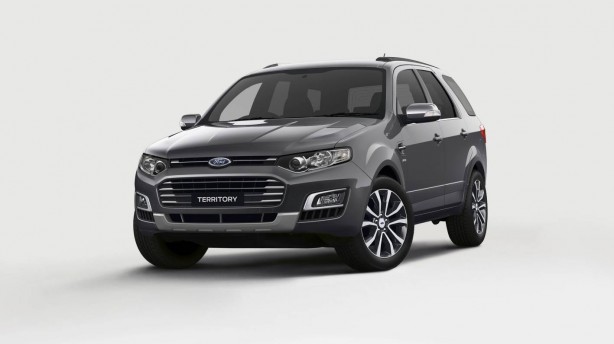 Ford Australia has released an official image of the refreshed 2014 Ford Territory, along with a photo of the 2014 Ford Falcon G6E. Both models sport the brand’s new trapezoidal grille already seen in the XR8.

New to the Territory are the new corporate grille flanked by a pair of slightly altered headlights. According to Ford, the new looks will go with the packaging, functionality and space that customers have come to expect from a Ford Territory.

“Our customers appreciate the functionality, seven-seat capability and fuel efficiency of the turbo-diesel but we also wanted to deliver a new level of visual appeal with the 2014 Territory,” Mr Nima Nourian, Exterior Design Manager of Ford Australia said.

“For 2014 the Territory gains a more robust, yet refined design and you won’t mistake it for anything else but a Territory,” he said. “Visually the surfacing is more architectural and achieves a very cohesive and sophisticated look.”

Ford Australia President and CEO, Bob Graziano, said the Ford Territory set the benchmark for family-friendly SUVs when it was launched.

“The new-look Territory is set to carry this on,” he said.

“Our customers love the comfort, space and fuel efficiency and now the refreshed design will provide another compelling reason to buy.”

The new look Territory will continue to be powered by its existing range of engines which include a six-cylinder petrol as well as the popular V6 TDCi, which currently accounts for more than half of all Territory sales. 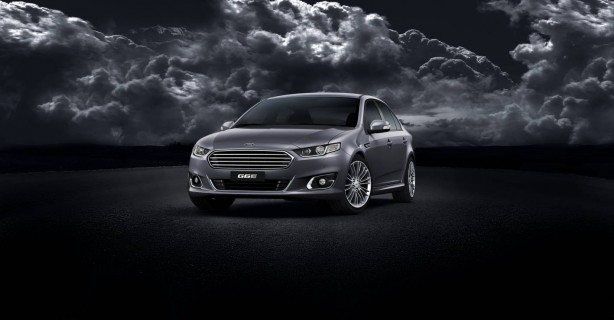 Ford has also continued its product tease for the new Ford Falcon with the release of an official image of the G6E. Like its sportier siblings, the G6E also carries Ford’s global ‘Face’, with a new Aston Martin-esque trapezoidal grille detailed with chrome surrounds.

Nourian said the brief for the G6E was to give customers a premium look, by implementing the Ford trapezoidal grille with strong technical graphics in the headlamps.

“The G6E provides a new level of design detailing. Even casually glancing at the G6E you can see it’s a premium vehicle,” Nourian said. “There’s some fine craftsmanship in the bright-work and the way the front and rear design treatments mesh with the jewelry on the car. It’s very well executed, even down to the front fender vent,” he said.

Pricing, features and specifications of the new Falcon and Territory range will be announced closer to the vehicles’ launch at the end of this year.