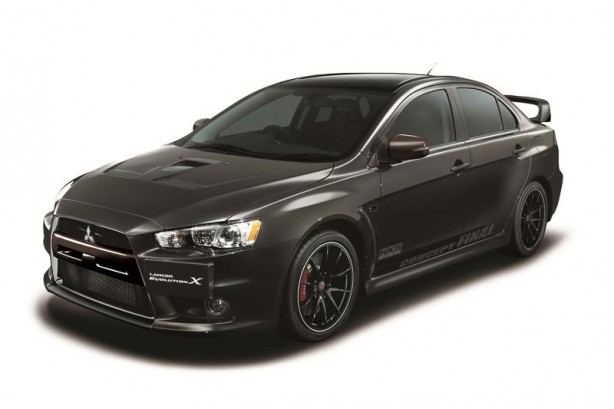 Mitsubishi has taken the wraps off its Lancer Evolution X Final Concept ahead of its official debut at the Tokyo Auto Salon in January 2015. While it may be called a concept, it really isn’t. Not by any stretch of imagination.

The car is meant as a last hurrah for the elderly Lancer Evolution X, which will not be replaced when it bows out in a year’s time.

While it may not be all new, the Japanese manufacturer has made significant improvement to the EVO’s 2.0-litre turbocharged four. It gets a new turbocharger by HKS, new intake and exhaust systems and an optimized ECU. As a result, the powerplant now delivers a monstrous 353kW (480HP) channeled to all four wheels via a 5-speed manual gearbox.

Besides the upgraded mill, the Final Concept is finished in a menacing matte black exterior paint with gloss black roof and rear spoiler. It suspended on a set of HKS height adjustable sports suspension and rolls on 19-inch forged aluminium wheels by RAYS.

The updated 2021 Mitsubishi Eclipse Cross has arrived on Australian shores, with the renewed line-up …