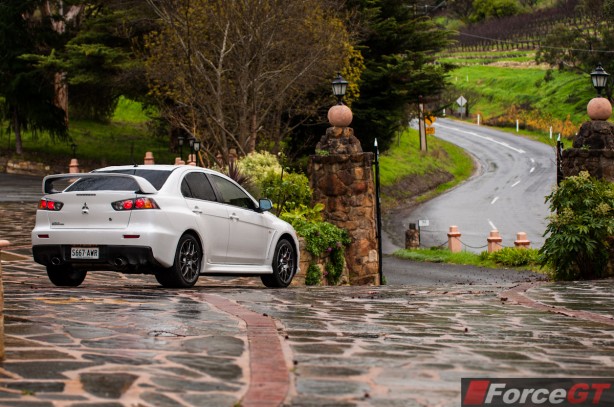 This is the 2014MY Mitsubishi Lancer Evolution X MR.

Yes, I know. I wish I could say it’s all-new too, but it isn’t. Besides the “new” mildly revised front bumper…. And the “new” coloured multi-information display…. And the “new” chunkier side skirts…. And the “new” body colour called Starlight, it is virtually the same car that was launched last decade – 2008 to be precise.

It is the granddaddy of affordable performance; besides the equally prehistoric Subaru WRX STI. Worst still, there is no new model in sight. Not even a swirly-wirly-wrapped test mule.

Still, the 2014 Evolution comes from a long lineage of rally-bred heritage, from the very first one in 1992 that placed Mitsubishi as a top rank contender in the 1993 World Rally and Asia Pacific Rally Championships, to the Evolution VI that powered Makinen to four Driver’s Championship in 1999. 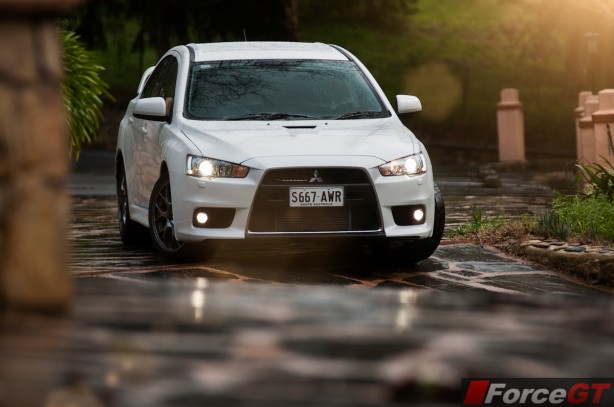 Step towards the Evo, as it is affectionately known by enthusiasts and admirers, and you’d find, arguably, its pumped up styling to be still relatively eye-catching. Even today. In fact, its aggressive nose, towering “look at me” rear spoiler and various gaping vents endows it with that unmistakable road racer look.

The interior, however, isn’t as dramatic. Besides a pair of leather-clad Recaro seats and sports steering wheel with paddle-shifters, the cheap and uninspiring plastic and design betrays the Lancer Evolution MR’s $65,990 asking price.

Park it next to the $13,500 cheaper Volkswagen Golf R and it’s almost depressingly cheap, in feel and presentation. 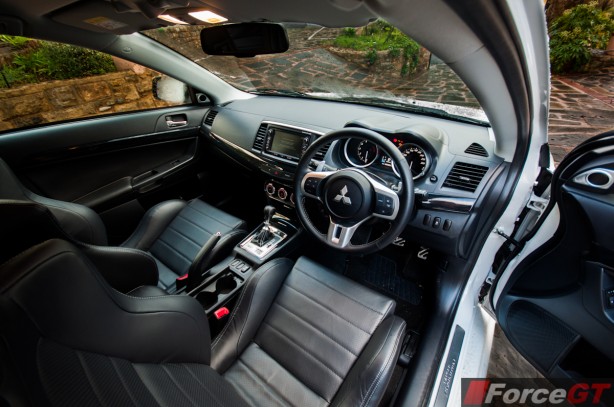 Mitsubishi made up for this with a generous level of equipment.  The Evo X comes with the brand’s Multi Communication System with hard drive and satellite-navigation, keyless entry and start, Bluetooth and iPod connectivity, HID headlights, climate control and reverse camera, amongst others. The extra cash over the garden variety Lancer also buys an aluminium roof, bonnet and front fenders that contribute to a lower centre of gravity.

However, it’s the way the Evo drives that is key to its allure. Twist the built-in key-fob and the 2.0-litre turbocharged MIVEC engine fires up with a metallic whine, accompanied by a deep exhaust burble.

It pushes out 217kW @ 6,500rpm and 366Nm @ 3,500rpm and is paired with the 6-speed Twin-Clutch Sport Shift Transmission (TC-SST) which is a ripper (the 5-speed manual is now relegated to the base model. No lost there). There are three driving modes – Normal, Sport and Super Sport. 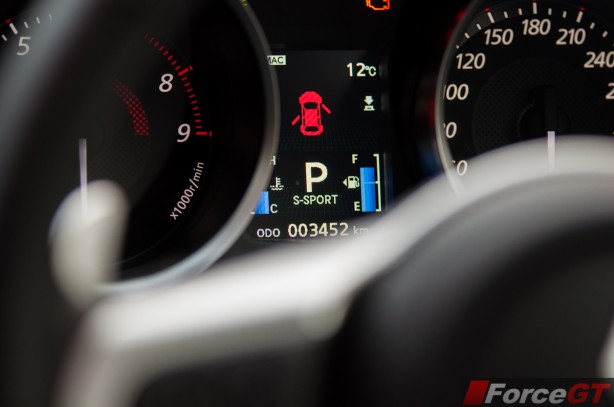 Normal is the default mode for day to day driving where efficiency takes precedence. It doesn’t shift as quickly as Volkswagen’s DSG, but is smoother by the same measure. Sport mode brings quicker gear changes and sharper throttle response, while Super Sports mode takes this to another level and is only suitable for track use.

Despite its age, the car’s Super All Wheel Control System (S-AWC) is one of the most sophisticated all-wheel drive systems around. It is made up of 4 independent systems working together and controlled by the vehicle’s ECU. Not only is the system capable of transferring power between the front and rear axles, its Super Active Yaw Control can apportion torque between the left and right rear wheels for optimal traction.

Not surprisingly, the Evo’s natural habitat is challenging B-roads. Like a highly evolved predator honing in on its prey, it sniffs out corners and devours them with ferocity. Its tenacious grip and flat cornering stance almost defy physics. 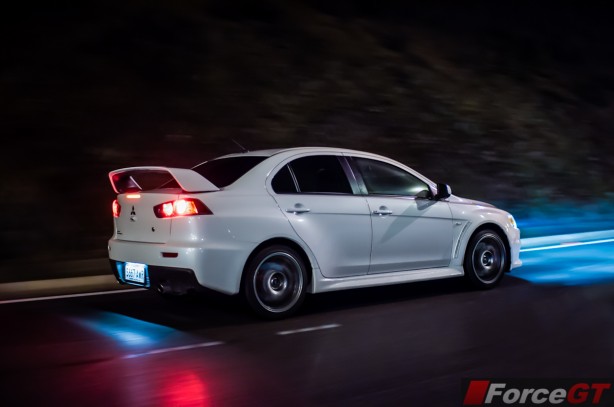 Flicking the SST into Sport mode unleashes the beast within; with the normally languid throttle response suddenly feather weight sensitive. Point its snout towards the nearest bend and the Evo will trace your intended line of travel as if it’s on rails, accompanied by a symphony of burbles and crackles on over-run. Its quick and direct steering provides constant feedback as to what the front wheels are doing.

Slowing the car on entry to the apex brings perfectly matched throttle blips from the engine. Together with a sonorous growl. It’s heavenly.

When powering out of bends, there is none of the dramatic steering wheel tugging that some other all-wheel drive machines exhibit, as too much power is sent to the front end before the diff transfers them aft.

Feed in a little more throttle and steering on exit and you can even provoke the tail to snap away briefly. 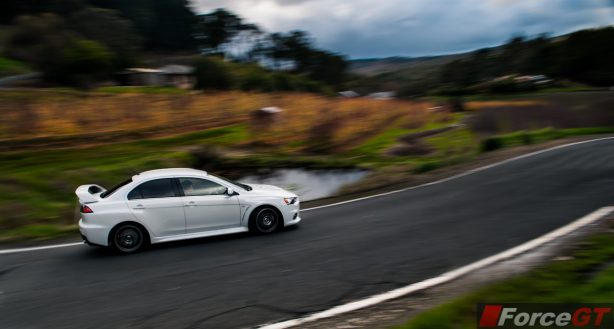 I have never felt, and look, so good rushing around a corner. As much as I’d like to convince myself that it’s my superior driving skills, in this case, it’s the machine. The Evo’s incredibly clever S-AWC did most of the hard work for me, shifting its power from axle to axle and wheel to wheel – inperceptibly.

The only kink in this astoundingly capable drivetrain is the brakes. The pedal feel is spongy and doesn’t bite as hard as you might expect, especially with brakes from Brembo.

However, away from the Evo’s twisty playground, it is a hard car to live with. While it’s got a turning circle that’s bigger than the moon and steering wheel that doesn’t adjust for reach, it’s the Evo’s unforgiving ride – courtesy of the Bilstein shock and Eibach spring set-up – that puts a grimace on my face every time I drive from home to work, as each fallen leaf on the tarmac sends a jolt, through the wheels, up my spine and threatens to rearrange it. Tyre roar is also a constant soundtrack with the Evo. This, however, is unlikely to be a surprise or indeed an issue to the car’s devotees.

If you are expecting four-cylinder fuel economy, you will be greatly disappointed. Despite my best efforts, the average fuel consumption read out refused to dip any lower than 11.2L/100km of premium unleaded. You can expect as high as 16L/100km on spirited drives.

You may now realise that the Mitsubishi Evo is an astonishingly rewarding car to drive. It might be the granddaddy of everyday performance, but it’s a damn good one. One that could turn even your grandma into a world rally champion.

Previous 2014 Mazda3 embarks on 15,000km road trip to Frankfurt
Next 2014 BMW 2-Series caught half disguised ahead of Frankfurt debut