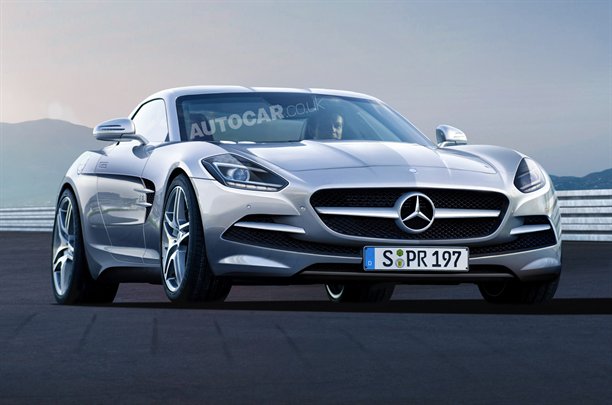 Riding on the success of its SLS AMG supercar, Mercedes and its performance partner AMG are building a Porsche 911 rival. The V8-powered ‘baby SLS’ will reportedly be called the Mercedes-Benz SLC, according to Autocar in the UK.

Development of the car is said to be already underway, following a strict performance programme similar to the one used on the SLS Gullwing. The new car will be priced around £75,000 and slots between the SLS and SLK55 AMG in Mercedes’ product portfolio.

The sports coupé will be a two-seater featuring a front-mounted V8. It will share the next-generation Mercedes SL’s platform, due next year. However, extensive engineering tweaks will be performed by AMG to differentiate the SLC from its more humble sibling.

Designed in-house at Mercedes’ Sindelfingen studio near Stuttgart, the SLC will borrow some of its styling elements from big brother, the SLS. Its proportion will however be more compact, measuring no more than 4.5 metres in length. The car will also be much lighter than the SLS, thanks to body panels constructed of carbon-fibre and aluminium.

Mercedes’ brief for the car is it will be a true Porsche 911 rival, with a light weight body and ride and handling to match. The Stuttgart based company has apparently chosen the Porsche 911 Carrera S and the Aston Martin V8 Vantage as the SLC’s development benchmarks.

The SLC will make its debut sometime in 2014 initially as a coupé, with a drop top scheduled for 2016.