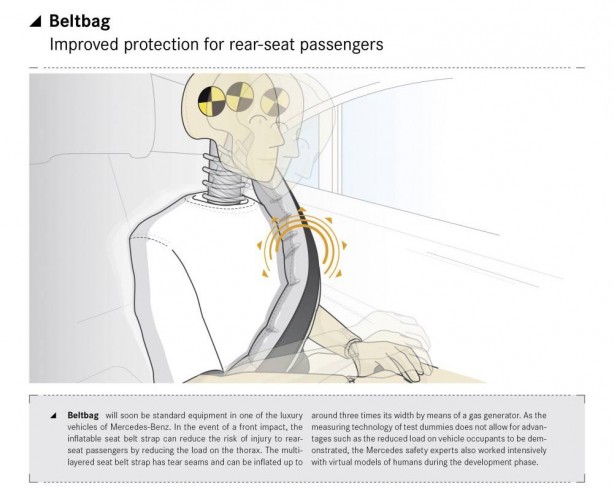 Mercedes-Benz is set to introduce its first Beltbag for rear seat passengers. One of the highlights from the ESF 2009 Experimental Safety Vehicle, the Beltbag is due to be fitted in the upcoming S-Class.

The Beltbag is essentially a seat belt with built-in airbag and can be used in exactly the same way as a conventional seat belt. During a severe frontal impact, the airbag control unit will trigger deployment and inflation of the Beltbag. A gas generator then inflates the multi-layered belt strap with Velcro seams to nearly three times its normal width. The resulting larger surface area is able to better distribute the force acting on the seat occupant, thereby reducing the risk of injury.

Besides the added safety feature, the Beltbag is said to be extremely comfortable to wear due to its extra-soft belt strap edge.

The Beltbag was developed with markets where rear seat occupancy rate are higher, as much as 30 percent compared to Europe. This complements the seat belt tensioners and force limiters that are already standard on the rear seats of Mercedes-Benz models.

At this stage, Mercedes-Benz has no plans to equip the front seat belts with the Beltbags, as front airbags are already included on all models as a supplementary restraint system.