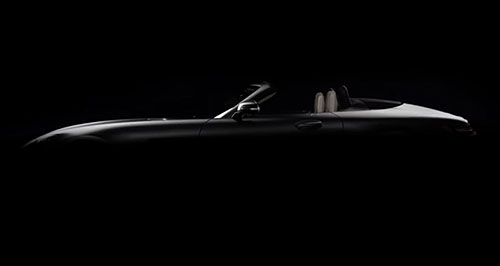 Mercedes-AMG has confirmed that the roadster version of its GT flagship sportscar will be unveiled at the Paris Motor Show later this month with the release of a new teaser video.

The short shadowy clip shows a side profile view of the AMG GT Roadster with its roof down, accompanied simply by the words “coming soon”. When launched, the drop top will join the coupe range that currently comprises the GT, GT S and GT R variants.

Spotted testing on public roads around Mercedes-AMG’s facilities in Affalterbach, Germany, in July this year, the AMG GT Roadster will feature a retractable fabric top and rollover protection hoops behind the seats. Drivetrain options likely to mimic that of the coupe, which means a 4.0-litre twin turbo V8 channeling 340kW and 600Nm (or 375kW and 650Nm in the GT S) to the rear wheels through a seven-speed dual clutch transmission.

The Roadster is not the end of the GT range, as speculation also points to a four-door GT4 variant joining the line-up to rival the likes of Porsche Panamera and BMW 6 Series Gran Coupe.

The Paris Motor Show opens its doors from 29 September to 16 October.