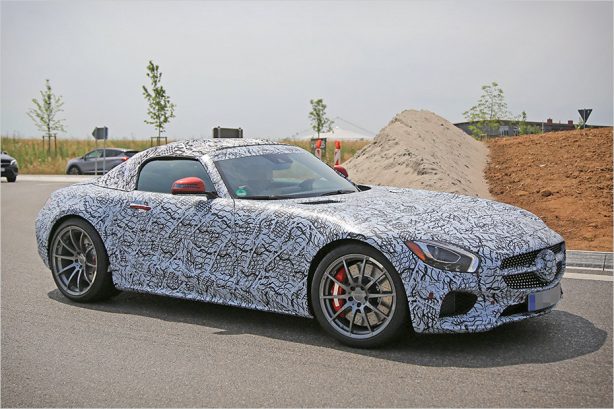 With the hardcore Mercedes-AMG GT R unwrapped at last month’s Goodwood Festival of Speed, the company has now moved on to get the first ever GT Roadster out of the line.

Spotted testing on public roads around Mercedes-AMG’s facilities in Affalterbach, Germany, this fully disguised prototype AMG GT drop-top could be seen sporting a retractable fabric top. Maintaining the sleek silhouette of the coupe, the AMG GT convertible features a smooth roof line that descents seamlessly into the rear deck.

First public appearance of the production AMG GT Roadster is expected to be in late 2016 or early 2017, with drivetrain options likely to mimic that of the coupe. This means a 4.0-litre twin turbo V8 channeling 340kW and 600Nm (or 375kW and 650Nm in the GT S) to the rear wheels through a seven-speed dual clutch transmission.

If things go well with the track-oriented AMG GT R coupe, we may also see a GT R convertible version with the same twin-turbo 4.0-litre V8 engine used on standard AMG GT models, but uprated in the GT R to serve up 430kW and 700Nm of torque.