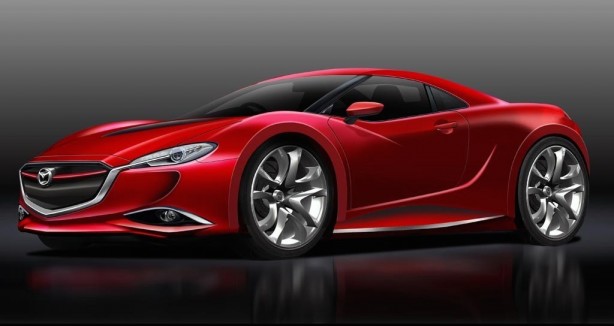 Mazda has dropped hints that it will not only release the reborn RX-7 in 2017, but potentially an all-new high-performance ‘halo’ sports car to commemorate its 100th birthday in 2020.

Mazda has performed admirably well since Ford abandoned it a few years ago, with record profits of just over $1.41 billion in the last Japanese financial year which ended on 31 March 2014.

All of its mainstream models have been highly popular, especially here in Australia. With the company turning a profit again, the Japanese brand is once again investing into the research and development of its sports cars lineup.

It is understood that the car-maker has registered both the RX-7 and RX-9 nameplates with the Japanese trademark office and as reported previously, Mazda plans to launch the new RX-7 in 2017 to coincide with the 50th anniversary of its rotary-engined sports car.

Speaking to Motoring recently, Mazda’s General Manager of Global Sales and Marketing, Yasuhiro Aoyama, declined to confirm if the RX-9 is indeed in the works but said the new MX-5’s scalable rear-drive platform could be used for new sports cars, while noting the roadster’s “chassis may imply future directions [of new cars]”. He also said that the chassis would have to be lightweight.

While the next-generation of supercars from fellow Japanese rivals will all feature hybrid technology, such as the 2015 Honda NSX and Toyota’s upcoming sports car built in collaboration with BMW, Aoyama said that Mazda doesn’t necessary need to follow that route.

It looks like the Japanese supercar race is definitely on!