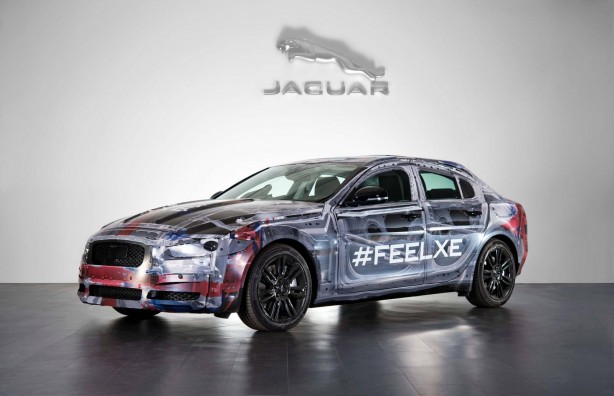 Jaguar’s upcoming XE compact executive has been partially revealed ahead of its scheduled debut later this year.

Taking advantage of the vast social media audience, the company released the first image of its all-important mid-sized sedan online. The long rumored rival to the likes of BMW 3-Series and Mercedes C-Class will ride on the new iQ[Al] platform and feature a new range of British-built ‘Ingenium’ four-cylinder engines available in both petrol and diesel forms.

The range will kick off with a 2.0-litre turbo petrol and a 2.0-litre turbo diesel designed to offer a good balance between economy and performance. Topping the range is a supercharged 3.0-litre V6 sourced from the F-Type churning out 250kW and 450Nm to challenge the BMW M3, Mercedes C63 AMG and Audi RS4. A higher output version of the supercharged V6 producing 283kW is also in the cards.

The teaser image shows the sports saloon’s profile for the first time with little camouflaged. The XE can be seen adopting some design elements from the bigger XF sedan, including the front fascia and tail-lights. However, the XE will be considerably shorter with a length expected to be around 4.7 meters.

The new Jaguar XE is scheduled to debut at the 2014 Frankfurt Motor Show in September, with global roll-out starting from mid-2015.