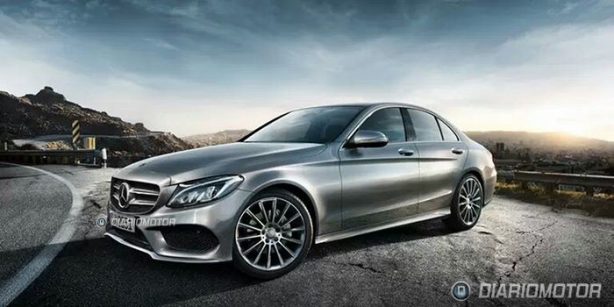 The first images of the 2014 Mercedes-Benz C-Class have surfaced on the web. The images are purportedly from Mercedes’ official website and were somehow leaked.

Looking like a mini S-Class, the new model sports a prominent upright Mercedes grille, flanked by stylised headlights. One of the images also show the car fitted with a sporty AMG kit.

We have already shown you previously what the car’s interior is like. It features a clear, modern styling with high-grade materials. There’s an innovative touchpad and allows all functions on the head-unit to be operated using finger gestures. The user also receives clear, haptic feedback.

A head-up display is also new in the C-Class and provides information on speed, speed limits, navigation instructions and messages from DISTRONIC PLUS.

The 2014 C-Class is up to 100kg lighter than its predecessor through extensive use of aluminium, hot-formed steel parts and ultra-high strength steels. It not only meets all current national safety ratings, but also the more stringent Mercedes-Benz requirements according to “Best Real Life Safety”.

The new C-Class sedan is fitted as standard with a steel suspension, with an AIRMATIC air suspension available as an option.