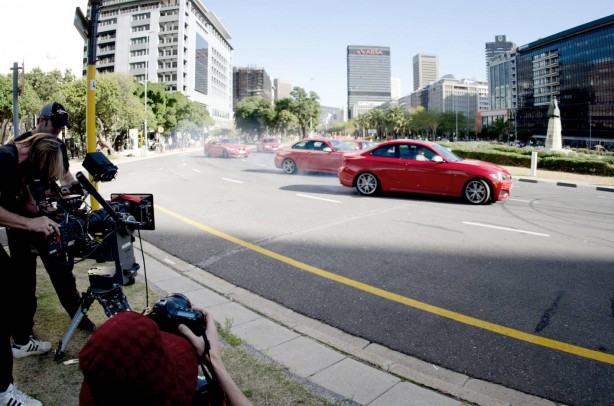 Passers-by at the centre of the South African metropolis Cape Town were treated to a spectacular performance when the city’s streets became a stage for a “drift mob show”. Five BMW M235i Coupes painted in Melbourne Red drove through the city to suddenly and seemingly spontaneously transform an urban traffic roundabout into a film set.

The M235i Coupes were steered by five of the world’s best and most experienced stunt drivers, with the encounter being captured for posterity by Hollywood legend Mic Rodgers. The result is a perfectly staged action video with smoking tyres and that special “goose bumps” feeling – but with no age limit. 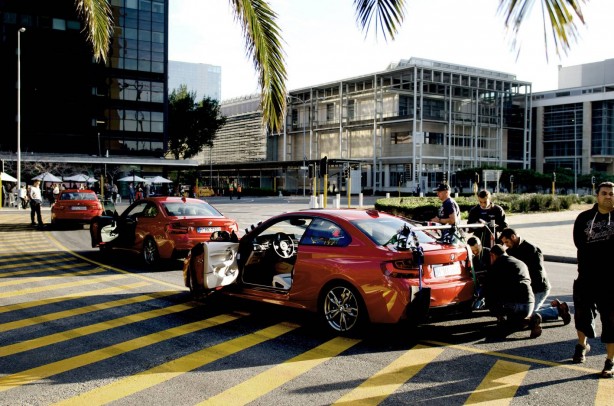 Boasting a turbocharged six-cylinder engine with 240 kW and 450 Nm, 50:50 weight distribution and rear wheel drive, the BMW M235i was chosen as the ideal car for the film.

The drivers didn’t take long to become accustomed with the BMW M235i Coupe. “It’s amazingly simple to do a clean drift in this car,” says Rhys Millen, professional stunt driver from New Zealand who was a Formula Drift champion in 2005 and has regularly provided major Hollywood film productions with breathtaking action on four wheels for a decade now. “The weight balance, the steering, the brakes – everything’s simply perfect for this purpose.” 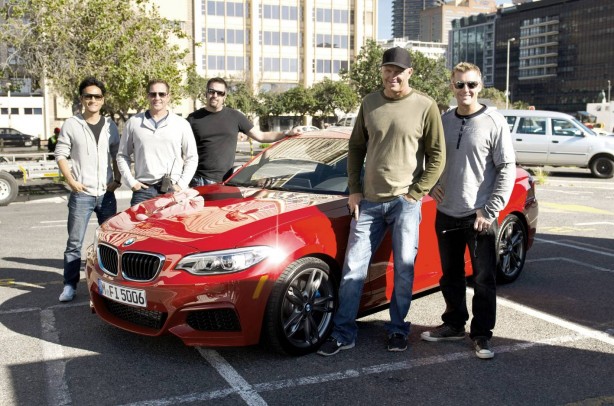 In order to render the BMW M235i Coupe’s performance characteristics a gripping experience, both the stunts and the film shoot were carried out exactly according to screenplay. The “who is who” of Hollywood’s stunt and action scene took their places behind the wheels and cameras, led by stunt coordinators Mic Rodgers und Riley Harper who during the course of their careers were not only involved in movies of “The Fast and the Furious” series, but also in box office hits such as “Iron Man” and “The Dark Knight Rises.”

They directed a team of drivers that transformed every press of the accelerator, every movement of the brake pedal and the slightest change in steering angle into a perfect choreography of tail swings, rubber abrasion and “smoke signals” from the tyres. 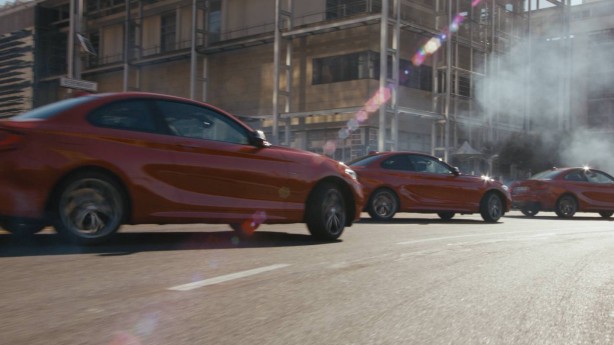 Apart from Rhys Millen and Samuel Hübinette, the drift mob driver crew also included the two successful Formula Drift pilots Conrad Grunewald and Daijiro Yoshihara as well as the stunt driver Rich Rutherford who has already been involved in around 200 films to date.

For stunt coordinator Riley Harper this quintet was the ideal choice: “That was a well- coordinated team, in which each member always knew exactly how and where the others were driving,” he comments.

But for passers-by who experienced the sudden drift spectacle at the traffic roundabout in Cape Town’s city centre, which had been completely blocked off shortly beforehand, the surprise was even greater. They were not able to realise until the camera vehicles had arrived that the supposedly spontaneous driving spectacle was in reality a precisely staged video shoot. Each manoeuvre shown in the drift mob clip was performed exactly according to plan, without the use of computer tricks or any other forms of post-processing of the footage.

The clip shot in Cape Town will be shown on BMW’s new online communication platform www.bmw.com/BMWstories. On the platform, fans of the brand will be able to share their own experiences with BMW models in the form of pictures and videos.

Check out the BMW 235i Coupe at the “Drift Mob” shoot in Cape Town below, along with behind the scenes footage.